I almost always erase text messages within a few days of receiving them in order to keep my inbox from becoming too cluttered. But for the past two months I’ve had a text message saved on my phone: It’s from Christian’s father and he sent it the day my husband dropped Christian off to him for the last time.  It reads:
Thank u so much for everything you all have done, and if you ever want to see (Christian) please let me know.
It’s always nice when parents of our foster children are appreciative of us rather than resentful! Although I’ve been tempted to take Christian’s dad up on his offer of seeing Christian again right away we talked it over and decided that it’s best for Christian’s sake if we hold off on seeing him until he has a chance to become more used to his father as his primary caregiver- they need their own time together to bond and become reacquainted with each other. Plus, we would hate to confuse Christian by showing up and then leaving.

Christian's age is another big factor in deciding how much contact to maintain, too.  We kept in regular contact with our three year old foster son for a bit at his parent's invitation after he was returned to their care because he knew the difference between his parents and his foster parents and he was aware of what was going on, but babies are a bit different than older children in terms of fully comprehending the situation.
I must also admit that it’s not just for Christian’s sake that we’ve decided to wait till we see him again- My little girl has been heartbroken to have to see her foster baby brother and ever-present playmate gone. Although we’ve continued to explain that we were just babysitting and now he is living with his daddy, she still refers to Christian as “my baby”. “But I want my baby to come back!” she pleads with tears running down her face on the hard days.  It makes me feel terribly guilty inside.
Seeing Christian again only to have to say goodbye again would just add to her trauma. To her this loss is like losing a sibling. After all, Christian is the only sibling she’s ever known. I’ve had my hard days, too, but to me the loss of saying goodbye to Christian isn’t nearly as devastating as it’s been for my daughter. Painful- yes, but I’ve been through this twice before and to me it’s more like the loss of breaking up with someone rather than losing a loved one to death. In that regard, not seeing our former foster child right away makes it a little easier for my husband and I to “move on” in the grieving process.

Saying goodbye to a foster child and deciding how much contact to have with them in the future (if that’s what their parents want) does feel a lot like breaking up with someone: On the one hand, it’s impossible to forget about that person because you’ve spent so much time together so you’ll see something or hear something that reminds you of them and you just can’t get them out of your mind and the memories come flooding back. But on the other hand, you almost want to forget about them as soon as possible because it’s either too painful (or annoying, depending on the relationship) to think about them. Using the “breaking up” analogy, even if one of the parties in the relationship says, “We can still be friends” it’s just awkward and almost like you’d prefer to never see them again just to make it easier because how do you go back to being “just friends” after being more than just friends?
Similarly, it’s hard to go from being a substitute parent to a child 24/7 for several months to having them disappear from your life. (Then again, I’d be lying if I said I miss changing poopy diapers and waking in the middle of the night for feedings) So when Christian’s father says, “You can still see Christian” it’s like hearing “We can still be friends” after a break-up and it feels me with mixed emotions: Of course we’d love to see him again and we’re extremely grateful for the chance . . . but then again, maybe we just need to move on and make it less painful and confusing for everyone involved.
Last week I got another text from Christian’s dad inviting us to Christian’s 1st Birthday Party the next day. I can’t believe he’s already turning one! We couldn’t make it because we had a previous commitment. I texted back and thanked him for the invitation and said we would love to come visit him at Christmastime and bring him a present.
His reply:
Anytime, you took care of my baby and met his needs and I appreciate it so much and in two weeks I’m getting custody. Things are going great.
Another text message I’ll definitely be saving.
Posted by Mary at 8:16 AM 9 comments

Book Review: The Boy Who Was Raised as a Dog

I recently used the Lending Library and checked out The Boy Who Was Raised as a Dog and Other Stories from a Child Psychiatrist's Notebook by Bruce D. Perry, M.D., Ph.D and Maia Szavalitz.  As a foster parent I found it very resourceful.

I don't want to give away too much but I think that the authors did a great job explaining how children deal with trauma, both physiologically and psychologically, in terms that everybody can understand.
Two other thoughts:
1)  One sentence alone convinced me that David Koresh is an evil man.  The psychiatrist who wrote this book worked with the Branch Davidian children survivors of the Waco Compound (See Chapter 3)
2)  Holding Therapy is assinine.  (See Chapter 7)  I just don't get it.  The first time I heard the term I thought that "holding" referred to bonding and nurturing as a means of encouraging attachment, not as a means of restraint and force.
This book was disturbing to read at times but a necessary read which begs the question, Why did I read it?  In answer to that, I'll quote what the author has found in his experiences working with traumatized children:

"In order to appreciate how children heal we need to understand how they love, how they cope with challenge, how stress affects them.  And by recognizing the destructive impact that violence and threat can have on the capacity to love and work, we can come to better understand ourselves and to nurture the people in our lives, especially the children."
"Ultimately, what determines how children survive trauma, physically, emotionally, or psychologically, is whether the people around them- particularly the adults they should be able to trust and rely upon- stand by them with love, support, and encouragement.  Fire can warm or consume, water can quench or drown, wind can caress or cut.   And so it is with human relationships: we can both create and destroy, nurture and terrorize, traumatize and heal each other."

Book Review: Tell Me Again about the Night I Was Born

Last week as I was replensihing our supply of board books from the local library I came across Tell Me About The Night I Was Born- in board book form!  I had heard of this book, written by adoptive mother (and Activia spokesperson) Jamie Lee Curtis, but I had never actually read it. 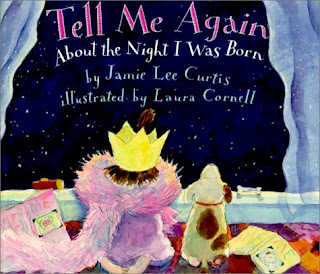 Ironically, the very first page I opened up to happens to be the one that stirs up the most feelings inside of me:


"Tell me again about how you couldn't grow a baby in your tummy, so another woman who was too young to take care of me was growing me and she would be my birth mother and you would adopt me and be my parents "

Midway through that sentence I was immediately overcome with with a flood of emotions ranging from gratitude and love to inadequacy and jealousy.  Although the part about the woman being "too young to take care of me" isn't accurate in our case since M.'s birthmom is only 5 years younger than I and had two other children, the phrase "couldn't grow a baby in your tummy" left me feeling achy and empty inside.  In fact, I was totally caught off guard and I almost burst into tears right there in the library!

I guess it just goes to show that although I think I've dealt with and accepted my own infertility issues there will probably always be triggers that stir things up inside of me.  One day I may feel like I'm at "acceptance" in the grief cycle and then the next day I may come across something that puts me back at "depression" or "anger".  Proof enough that as wonderful as adoption is, it doesn't "cure" the physical or emotional aspects of infertility.   Does adoption cure childlessness?  YES!

Back to the book. . . M. LOVES it which means I'll soon be adding it to our permanent collection.  Aside from the book having definite appeal to children, I got a kick out of some of the more subtle adult humor the illustrator uses from the names of the books the parents read,  the pamphlet the lady is reading on the airplane, and the labels on the diapers and diaper ointment.

Overall Tell Me Again About The Night I Was Born is a book I think younger adopted children and their parents will enjoy reading together.

On a side note and as a head's up: You may be overcome with a sudden urge for yogurt each time you see Jamie Lee Curtis' smiling face on the back cover . . . Activia!
Posted by Mary at 6:35 PM 5 comments