Mama Lark has invited me to be on a year-long weekly panel of foster moms on her blog.

Click HERE to meet the panel members of “MAMA MANIA.” 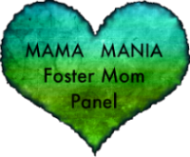 I look forward to learning something new from each of these women as they offer up a different perspective unique to their own experiences!

Week one of the panel started today. Click HERE to read. Enjoy.
Posted by Mary at 7:17 AM 0 comments

I had never heard the term “artificial twinning” until last year when our adoption caseworker used it in a sentence. I was familiar with the concept, but I just didn’t know there was actually a coined phrase to describe it. The name alone brings to mind images of scientists in white lab coats, surrounded by petri dishes, syringes, and lab rats. However, in the adoption world, artificial twinning, using Adopting.org’s definition, is defined as:

“An expression used to describe unrelated children in a family whose birthdates are less than 9 months apart, including- a combination of biological and adopted siblings, adopted only, step or foster siblings."

I’ve been curious about the subject so I googled the term and came across a few articles full of professional insight. What I learned in my reading is that pretty much without exception, adoption and child development professionals discourage the practice of artificial twinning. Why? As adoption director and author of the article Artificial Twinning: Adopting More than One (page two on this adoption newsletter) Richard Van Deelen says

“ the adjustment demands of both children happening simultaneously may overwhelm the capacities of the parents to cope and adjust themselves.” He was speaking specifically about cases of couples adopting babies at the same time."

I can understand that line of reasoning. Children- especially babies- do require a lot of work. I thought back to three short years ago, when a four-month-old baby girl was placed with us as a foster placement. Our nights suddenly included middle of the night feedings, lullabies, and diaper changes. Just two weeks after our foster daughter was placed with us we received word that our daughter’s birthmother had chosen us and another baby girl would be joining our family. When our daughter came home from the NICU a month later it made things a little easier for my husband and I since we no longer had to coordinate our schedules and take turns going to the hospital several times a day to feed, hold, change, and bathe our daughter, but now our nights were full of twice as many middle of the night feedings, lullabies, diaper changes, etc. We devoted all of our time, energy, and love to caring for both babies. It was exciting but physically exhausting as well. Many people would say, “It’s like having twins!” In some ways I’m sure it was, but in other ways my mother, who knows firsthand what it’s like to raise twins, says it was probably a lot harder because although the girls were only five months apart chronologically, they were on very different developmental levels considering our daughter was a preemie. They were also on different sleeping and feeding schedules, wore different size diapers and clothes, drank different formulas, and went to different pediatricians. Notwithstanding the demands of two babies, my husband and I wouldn’t change that experience for anything.
Van Deelen also addressed the concerns of competition and comparison in artificial twins. To reduce such comparisons he suggests that adoption agencies use age spacing- (ideally, he says, adding a second child when the first is 2 ½ to 3 years old) and that they place children of different genders together.
I can personally attest to the fact that twins do get compared to each other- a lot- regardless of whether they’re identical or fraternal or even the same gender. I know this because I am a twin. Then again, “regular” siblings also get compared to each other, too. The biggest difference is that in twins their similarities and differences seem much more pronounced because of their obvious closeness in age, and in some cases, appearances.
Patricia Irwin Johnson, a fertility specialist and adoption educator, was much more outspoken than Van Deelen in voicing her opinion on the subject of artificial twinning in her article Instant Family: The Case Against Artificial Twinning.
The specific focus in Irwin’s article was “the unique issues of genetically unrelated healthy babies less than eight months apart in age, who, during the cognitively, physically, and emotionally crucial first year of their lives, become “twins.” My goal is to help parents-to-be see that creating families in this way is not in either baby’s best interest.”
Although I appreciated that Johnson had the babies best interest at heart I wasn’t a big fan of the way she painted infertile parents who are hoping to adopt as selfish, naïve, impatient, and even unethical. Even if a family did, as one of her examples suggested, simultaneously adopt two unrelated babies through international adoption, isn’t it better for a child to be placed in an adoptive two-parent home even if they must divide their time and attention with another child so close to their age rather than the alternative of remaining in a crowded orphanage with a ratio of caregivers to children which makes it nearly impossible for each child to get their needs met?
Other points of interest in Johnson’s article were her suggestions for parents with very close-in age babies. I thought the “separating your children in school” advice was interesting as I’ve seen some mothers of “real” twins (as opposed to “artificial” twins- UGGH- the term sounds far too weird to me, as if the children are robots or some kind of a science experiment!) use both strategies with their twins- keeping them in the same classroom/same teacher versus purposely splitting them up into different classrooms.
Anyway, I know there are some foster and adoptive FAMILIES OUT THERE WHO FIT THE CRITERIA FOR HAVING ARTIFICIAL TWINS:  What are your thoughts on the matter? Do you agree with what professionals have to say or do your own personal experiences tell a different story? What are the advantages, disadvantages, or concerns about having “artificial twins” in your family?
Posted by Mary at 2:56 PM 10 comments

Alternate Title for this Post:  "Can I have some Cheese with my WHINE?"

Lately I’ve found myself giving in to feelings which can become all too familiar for those waiting to adopt (or for anyone who is anxiously awaiting anything significant in their life, for that matter): namely- feelings of self-pity, alienation, and impatience.
It’s been 27 months since our home study has been approved, or as I automatically equate it with- 3 “regular” pregnancies. Enter Impatience. Looks like we WILL have to wait as long as an elephant for our next child! [Reference to this post where I noted that elephants are the mammals with the longest gestation period of 22 months.]
Waiting is hard. And I’m well aware that there are plenty of others out there who have been waiting much longer than I have or will ever have to! Waiting can indeed serve a purpose, but sometimes it feels, in the words of Dr. Suess, like “a most useless place.” To further quote Dr. Suess‘s Oh The Places You’ll Go (it seems fitting seeing as this month is his birthday): 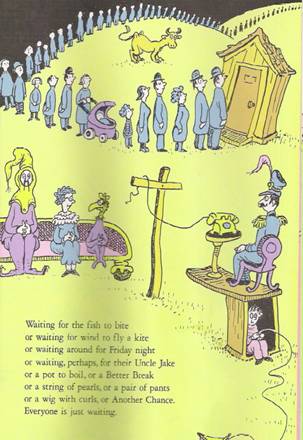 The thing that frustrates me most is that we haven’t just been “sitting around” waiting for the phone to ring. We’ve tried to be proactive and do our part. Over the past two years I’ve had another surgery but no resulting pregnancies (which, incidentally makes me feel like a total failure). We’ve also taken two foster placements which have resulted in a reunification and a kinship placement/adoption. GREAT for our foster children, but hard on us. I’ve searched through profiles of “Waiting Children” but thus far nothing has felt right. We’ve researched additional adoption agencies and a few adoption facilitators and discussed which ones seem most reputable and affordable.  We’ve updated our birthparent letter and online profile with our current agency and we’ve sent out even more reminders to family and friends about our hopes to adopt in the hopes that they can “keep their ears open” for us, But every time I do so it just serves as a reminder of how “different” we are from most everyone else who builds their families seemingly effortlessly and predictably through having biological children. Enter Alienation.
Sometimes on my especially bitter days my thinking is overcome with “If Only’s”. Enter Self-Pity.
“If only my body were normal.”
“If only we were rich- maybe adoption IS all about the money.“ (Not true- but sometimes it seems that way.) Then we could fly to Africa or China and adopt internationally. Or we could go through an agency that can guarantee us a child-preferably in months rather than years as we’re not getting any younger. When you’re in your early or mid-twenties you can wait four or five years for a child, but when you’re in your mid-thirties or older TIME IS OF THE ESSENCE!
“If only we lived in Memphis, Tennessee- then we could post our adoption profile in the bathrooms of Frayser High School.” Just kidding . . . sort of.
“If onlys” can be my worst enemy. They defeat any hope and faith I have and leave me feeling very ungrateful. But perhaps the most damaging spiritual aspect of If Only’s is that they cause me to think that my plans and personal timeline are more important or wiser than the Lord’s will.
Every so often I feel the need to take a break from the online adoption community simply because it can be so emotionally all-encompassing.  But as I recently dove back in and started reading the thoughts of others- wether they are in the middle of an adoption journey or just starting out, dealing with the uncertainty surrounding foster care, or in the process of making an adoption plan for their child, it was comforting to realize that I am not the only one in "The Waiting Place" or "The Inbetween".
Here's a little nugget of wisdom offered up by another foster mom (it was accompanied by a beautiful picture nonetheless) which helped to buoy me up while I wait:
“when times get muddy and unclear - keep persevering. something beautiful is about to bloom.”
Posted by Mary at 2:22 PM 4 comments