When I heard that today was National Pancake Day I laughed.  You see, our current foster placement, 2 year old Ty, has some food issues and pancakes (or "ba-bates" as he refers to them) are his favorite food obsession- so much so that he asks for them at least 17 times a day- even if it's been ten minutes since we've last eaten.  Basically, every day is National Pancake Day at our house.﻿ 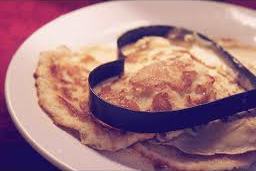