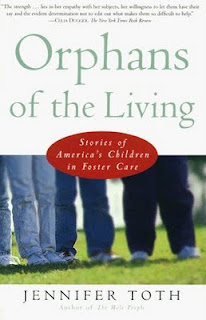 None of these findings were particularly new to me and I don’t know that I necessarily have a solution to the problem of the increasing amount of children entering the foster system and particularly, older foster children “aging out” of the system, but this is what I DO know: Our most serious social problems begin AND end with the family.
What can be done to prevent the cycles of abuse and addiction?  Are these problems so deeply rooted into families that it’s useless to talk about prevention and we must now use all of our energy and resources (including tax dollars) just keeping up with all of the resulting repercussions of broken homes and wounded children?  Any thoughts?
Also, can anyone out there recommend or share any SUCCESS STORIES of children who successfully “graduated” from the foster care system?  I need to hear some good to balance the bad.
Posted by Mary at 11:15 AM 6 comments

A couple of years ago a young neighbor girl approached me and quietly asked, “Does M. know she’s adopted?”. I immediately found myself growing defensive- not so much because of the actual question but because of the implications her tone of voice implied- as if being adopted were some big, scary secret. If this little girl were an adult my overprotective Mama Bear instincts would have kicked in full gear and I would have been very tempted to become reactionary and turn the question around on her and ask, “OF COURSE!  Why WOULDN’T she know she’s adopted?” But I realized that she was just a child who was asking an innocent question and that this was an opportunity for a teaching moment. I calmly answered her inquiry by replying, “Yes, M. knows she’s adopted. She’s always known and we’ve talked about it since she was a tiny baby.” The little girl smiled, satisfied that her question had been answered. That was the end of the discussion.

I think that for me, as an adoptive parent, there’s a happy medium when it comes to how often and how much I talk about my child’s adoption with her and with others. On the one hand, I don’t want my daughter to ever feel like the fact that she was adopted is “weird” or something she should be ashamed of. I think it’s important for her to realize that the way she joined our family is different from the “typical” way other children join their families. Hopefully, through our communication our daughter will come away with the sense that adoption is something that makes her unique, rather than “weird” and it is something to be celebrated.

On the other hand, I don’t want to emphasize the fact that she’s adopted SO MUCH that it reinforces how “different” she is from others and, by so doing, it instills a sense of alienation or embarrassment in her.

Speaking on the subject of Adoption as Misrepresented in the Media, adoptive parent and adoption advocate Sally Bacchetta said,

"Adoption is not the “normal” course… humans are not biologically or physiologically predisposed toward adoption. Adoption was created, not organically instilled. However, it is a reality, and adoptive families have the same potential for love and bonding and affection and permanency as any family created biologically.

So, there’s a paradox there, for the media and for the rest of us. How to speak authentically about adoption – that is to acknowledge that it is in some way different, yet not make “different” mean “less than, bad, inferior, weird”, etc."

When the topic comes up I gladly share that M. is adopted, but I don’t go around telling people “My daughter is adopted!” when it’s not relevant. Doing so would be like a parent announcing “My child was a breech birth!” every time introductions are made. If birth stories were a topic of conversation, then it would certainly be appropriate to share such details, but otherwise, does it really matter?

I think it’s a balancing act to acknowledge that adoption is different – or to speak “authentically about adoption” as Sally Baccheta puts it, without automatically lumping or equating something that is “different” within the same category of something that is “abnormal.” OR, taken to the other extreme “sensationalizing” the subject.

Looking at both ends of the spectrum, I like to refer to keeping adoption somewhere in between the two pendulums as “normalizing” adoption.

I’ll be the first to admit, my husband and I probably swing more towards the right side of the spectrum in terms of celebrating (but not sensationalizing) our daughter’s adoption. Her adoption is indeed something to be celebrated, but at the same time, we are just a regular family too, who happens to be built through adoption.

Did anyone catch the episode of Modern Family where the adoptive parents tried to “normalize” their daughter’s adoption by excessively using the word “adoption” in everyday speech and then training Lily to clap her hands every time she heard the word? I got a kick out of that. I was also very touched by the “Two Monkeys and a Panda” story.   Especially when Lily clapped her hands excitedly at the very last word. 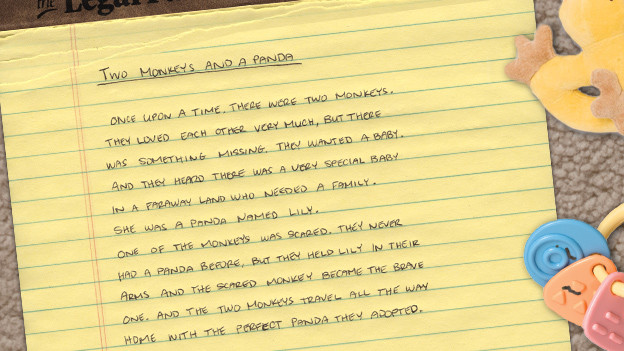