Impact of an Addicted Parent Infographic

-In 2012, drug or alcohol abuse accounted for 31% of the cases of children being removed from their homes and placed into foster care.

-There are 8.3 million children currently living in a home with a parent who suffers from an addiction.

Although the statistics presented in the infographic and the cycle of addiction in general seem very disheartening, to me the most hopeful part of this infographic is entitled, "What you can do if you suspect a child is being neglected or abused by their addicted parent?" 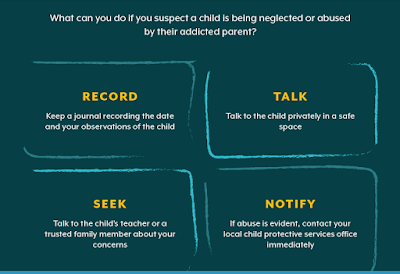 And if YOU are a parent battling addiction, please know that you are loved and that there is help.

THIS is Why Foster Care is Necessary

When I saw these haunting photos this week of a 4-year old boy's caregivers passed out in their car, leaving him helpless in the back seat till help came, it made quite the impression on me. 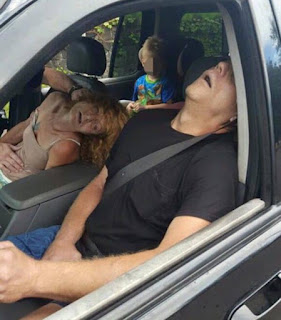 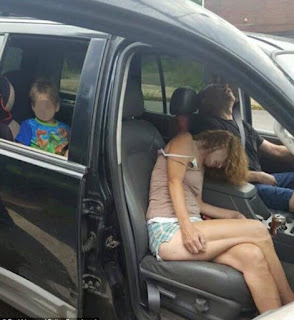 Some of my initial thoughts were:

2)  When I read "overdose" in the headline which accompanied the pictures of the corpse-like countenances I immediately wondered, "heroin?"

After reading the accompanying article my suspicions were confirmed- "Yes, heroin."  So sad.

Apparently when paramedics arrived on the scene they were able to administer Narcan to the adults before they were transferred to the hospital and consequently arrested.

After reading the article I dared to venture into the comments section.

Some readers were upset that Narcan was administered, basically asserting that the caregivers "deserved to die" for placing a child in such grave danger.

Many other readers came to the defense of the unconscious caregivers stating that it was unfair or unethical of the cops on the scene to publish such photos on their department's Facebook page.  Yet other readers were concerned that the photos were an injustice to the four year old boy and could cause psychological damage to him further down the road when he becomes aware of them- which leads me to my next thought:

3)  I have a hunch this little boy is already deeply aware of the collateral damages addiction can wreak on a family.  This is most likely not the first time he's been in this type of a situation but- Thank Goodness- it is the first time it has come to the attention of someone who is in a position to intervene.

As for the East Liverpool, Ohio's Police Department, I am in agreement behind their motives for publishing the pictures as expressed in the following statement:

“This child can’t speak for himself but we are hopeful his story can convince another user to think twice about injecting this poison while having a child in their custody. We are well aware that some may be offended by these images and for that we are truly sorry, but it is time that the non drug-using public sees what we are now dealing with on a daily basis.”

4) Yes, the truth can be uncomfortable, disturbing, and downright ugly but it NEEDS to be exposed, especially when innocent children- or those who cannot advocate for themselves- are at risk.

I am certain that there are many social workers, judges, guardian ad liteums, therapists, medical professionals, teachers, and foster parents who feel much the same way as the Ohio Police Department does when they stated, "it is time that the non drug-using public sees what we are now dealing with on a daily basis.”

These individuals and professionals deal with the consequences of addiction on a daily basis and want so desperately to bring awareness to the reality and tragedies addictions bring to society including tearing families apart and creating orphans out of far too many children.

I admit that at times I may have had an attitude similar to some of the readers who were outraged by these photos and demanded that the caregivers of this little boy be locked up forever.  However, experience has taught me that the caregivers of children who are placed into foster care are victims as well.  In my personal experiences as a foster parent, 95% of the children we have fostered came into care as a direct result of a family member's addiction. Whether one views addiction as a disease or a choice is secondary to the fact that these caregivers need help and support; hence, my overall thought to summarize how I feel about these photos is:

5) "THIS is why foster care is necessary."  And there are two reasons why I believe this:

A) foster care is not only necessary to keep children out of harm's way- [after all, shouldn't the top priority of foster care and social services be to protect the most vulnerable of individuals: at-risk, abused, or neglected, children? It seems like a no-brainer!]

B) foster care is also necessary to give families another chance to stay together.

A huge part of foster care is about family preservation.  Believe it or not, but foster care is not just taking kids away from their parents and "giving" them to another family or haphazardly placing children in institutions when they can't be placed in a family setting.

Unfortunately, sometimes things have to hit rock bottom before families can actually get the help they need or before a child's suffering can come to light.

For example, let's give this little boy's caregivers the benefit of the doubt.  Let's imagine that they both have the desire to get clean but for whatever reason- perhaps cost-prohibitive treatment options, being born into a family of drug addicts, or overwhelming feelings of helplessness- they just don't see sobriety as a realistic option.  For their sakes- AND MOST IMPORTANTLY FOR THE SAKE OF THIS YOUNG CHILD- law enforcement involvement is honestly one of the best things that could happen to them.

Perhaps I sound too idealistic in my view, but if law enforcement gets involved then consequences must be faced and since a child is involved then social services will most certainly become a part of the solution.  While law enforcement can ensure that individuals "pay" for or are accountable for their actions, judges and social service workers can mandate and provide options for families to get their children back into their custody by way of required drug testing and/or drug treatment, counseling sessions, mandated parenting classes, vocational or educational training which helps secure not only employment but proper housing.  In this way, what might appear to some addicts as hitting rock bottom and losing everything is actually an opportunity to accept help and become truly accountable for their choices and a chance to get sober.  That is certainly not to say that it is an easy path.

I'm thinking of one foster mother in particular who shared the brutally honest viewpoint of the birth mother of the children placed in her care.  This birth mother was an addict who was so committed to getting her children back into her care (after losing them to the state's custody more than once) and yet so realistic about owning her addiction that she stated, "I wanted DCFS to take my kids because I knew that having my kids taken from me was the only way I could remain motivated to stay clean."

Children who are removed from unsafe homes and/or families enslaved by addiction are not the only victims.   Unfortunately, the children are often the ones left to deal with THE BRUNT OF THE UGLY CONSEQUENCES of addiction!  It's so unfair.

I'm aware that, as hard as at can be to imagine, this four year old boy who has been removed from his family and placed into state custody is probably crying at night for his daddy and mommy or grandma and grandpa (I'm unsure what their exact relation to him was as I read a couple of differing accounts) and there is a foster parent out there trying to comfort him and explain that he is "safe" now.

That same foster parent is probably struggling with feelings of anger and resentment at their foster child's caretakers for allowing the situation to escalate so far while simultaneously trying to remain calm and offer comfort to their foster child in their new, unfamiliar environment.

The mind-boggling concept for some to understand is "How could this little boy miss the people who neglected him so?  After all, now he's {hopefully} been placed in a safe and loving home and is cared for by people who have had their backgrounds and home environment thoroughly checked and who have undergone sufficient training to care for children coming from such situations.  So why on earth would he miss his former caregivers?"

The answer is simple: Because they are his family.  And as I've mentioned, foster care is about helping families stay together when possible.
Posted by Mary at 12:29 PM 0 comments

Do you have an interest in adoption?  (I can't help but figure you do if you happen to be reading this right now).

Do you also have an interest in Pinterest?  Keep in mind that my definition of "interest" is a fairly broad one that includes a mild curiosity to a sporadic hobby to a full-blown pinning addiction.

If you answered "yes" to both questions above then check out adopting.org- which is basically PINTEREST FOR ADOPTION- with articles, videos, images, memes, and even quizzes all relating to adoption.

Simply choose whatever perks your interest from the top menu bar underneath the adopting.org header, by clicking on the articles featured on the home page, or narrow your search to find something specific by using the Search Box in the upper right hand corner: 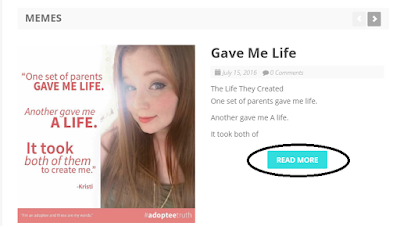 Don't have time to read something in its entirety?  No problem- that is precisely what bookmarking is for!   Not only is it easy to search for content on adopting.org by tags but it is extremely easy to bookmark and share content by clicking on one of the social media sharing icons at the bottom of each image or article:

If you are extra ambitious and happen to blog or advocate for adoption and would like to share YOUR work on adopting.org simply click "SHARE YOUR STUFF" on the menu under the header as submissions are always welcome for review by the moderators of adopting.org!
Posted by Mary at 8:00 PM 0 comments