I Support Adoption from Foster Care

I am sharing this on behalf of a Bloggin' Mamas Social Good Campaign. Bloggin' Mamas and Element Associates are donating a toy to a child in foster care for every blog post sharing this  information, up to 25.
Today, 402,000 children are in the foster care system in the United States. Nearly 102,000 children (under 18 years of age) waiting for adoption. During this holiday season, there is an extra push to help them find homes. The U.S. Department of Health and Human Services, AdoptUSKids and the Ad Council recently unveiled a new series of public service advertisements (PSAs) designed to continue to encourage the adoption of children from foster care with an emphasis on the importance of keeping siblings together. Check out this PSA video from the Ad Council:
Since the launch of the campaign in 2004, more than 22,000 children who were once photo-listed on the AdoptUSKids website are now with their adoptive families and over 35,000 families have registered to adopt through AdoptUSKids. Many times, there are siblings also listed.  Approximately 23% of children and youth actively photolisted on the AdoptUSKids website and waiting for placement in adoptive homes were registered with one or more siblings. Sibling relationships are often the longest-lasting relationships for children in foster care. 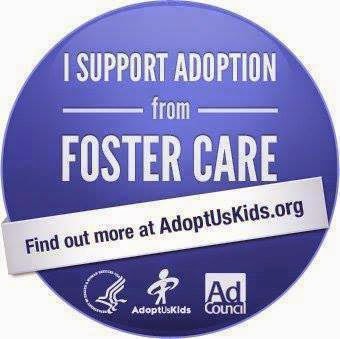 For more information about adoption, or about becoming an adoptive parent to a child from foster care, please visit www.AdoptUSKids.org or visit the campaigns communities on Facebook and Twitter.


DISCLOSURE: I was not compensated for this post. I am donating this space towards sharing this message. Bloggin' Mamas and Element Associates will be donating a toy to a foster child in exchange for my post, in support of AdoptUSKids.
Posted by Mary at 8:01 AM 0 comments 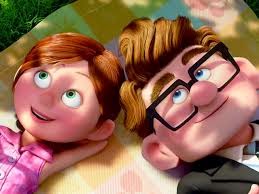 Next Step: Mediation and Pre-Trial

Jack and Jill had another court hearing this past week regarding their future.  At their their last Permanency Hearing, reunification services between their mother and DCFS were discontinued so their mother must now fulfill any unmet requirements of her Service Plan without the help of DCFS- even though the Division has provided her with plenty of resources and support over the last 15 months of having her children in their custody and even though the judge has already given her at least one 90-day extension.

Although services between DCFS & Jack and Jill's mom have been discontinued she still has supervised visits with her children at the DCFS office twice a week for two hours each.  These visits will continue until her rights are officially terminated which leads to the next big question, "Will her parental rights be terminated?  And if so, when?"- which I'll try to explain in a minute.
The other major development since the last hearing is that Jack and Jill's Permanency Goal has officially been changed from "Reunification" to "Adoption".
The whole legal process regarding their permanency is kind of confusing.  In fact, up until a couple of weeks ago I thought that this past week's hearing was the one where Jack and Jill's mother's parental rights would be terminated but it's a little more complicated than that:  Although the paperwork has been filed by DCFS to terminate her parental rights, there are going to be a couple of more hearings before the judge actually determines if that will happen:
The first hearing is not technically a regular hearing but rather a Mediation- which will take place over a month from now.  Although mediation will take place at court, it won't take place in a court room and the judge won't be there presiding or making any decisions.  Rather, a mediator who is also an attorney and an objective third party will talk with both parties (their mother, being one party, and my husband and I, being the other party) and try to come up with an agreement to avoid having to go through another trial.  Other people in attendance are their mother's court appointed attorney, the children's Guardian Ad Liteum (the attorney representing their best interest) and of course, the caseworker or anyone else involved in the children's case.
It was a couple of months ago that Jack and Jill's caseworker first mentioned to me that Mediation might be an option in their case.  I had heard of using a mediator in divorce or child custody cases, but had a vague understanding of how it works in foster care cases.  So I did a little research and came across this helpful and very easy-to understand information packet put together specifically for parents and guardians by New Mexico Administrative Office of the Courts & The Children's Courts Mediation Program (2007).  (Click on the picture for the entire document). You can find other examples of mediation in different states by clicking here.  I think the Child Welfare Information Gateway is a very helpful resource, by the way. 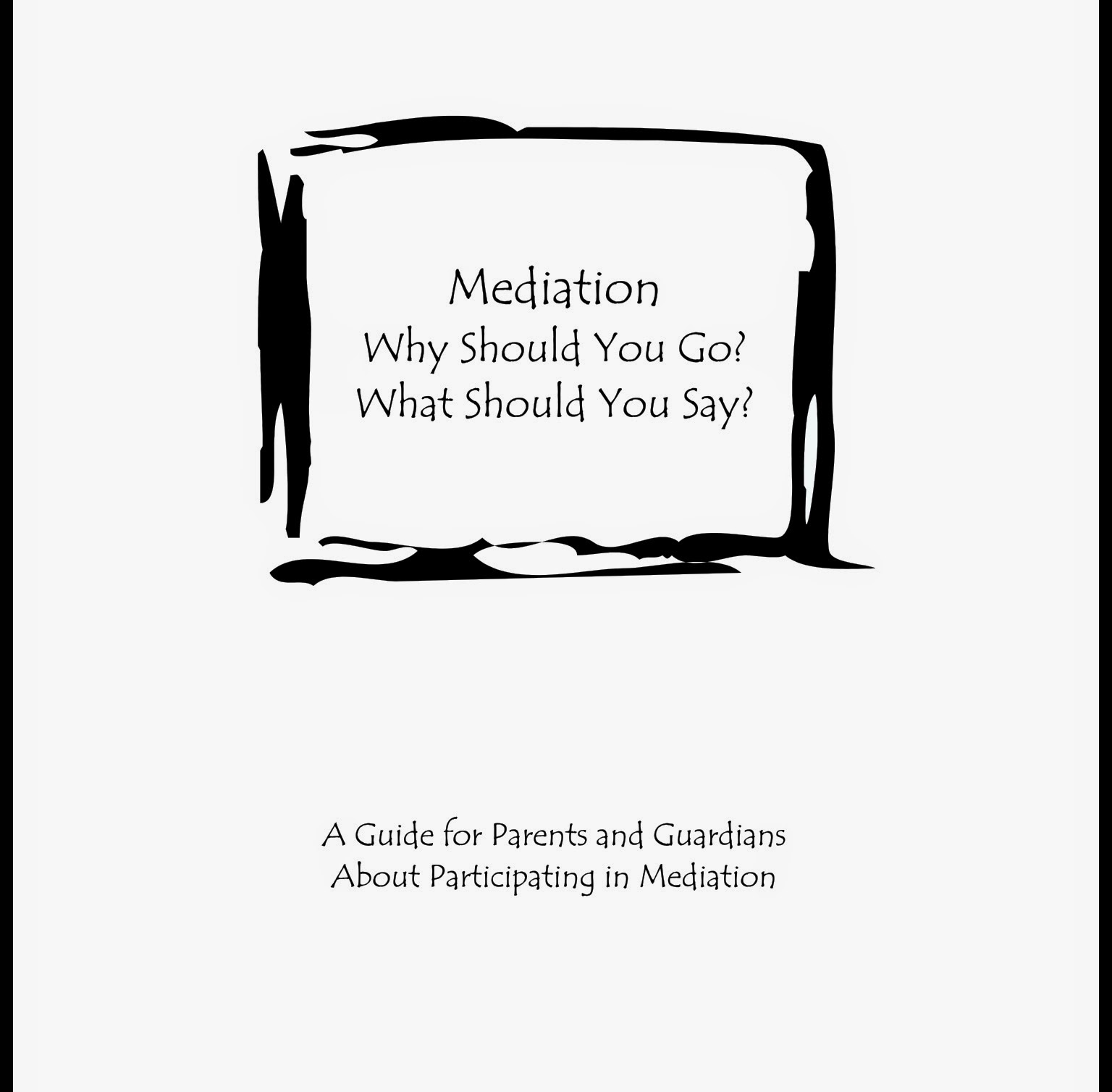 "Why Mediation?" you ask.  Here are the reasons why Mediation takes place in child abuse and neglect cases, as explained in the packet.  I circled the reason that best fits our foster children's case.  Click to enlarge. 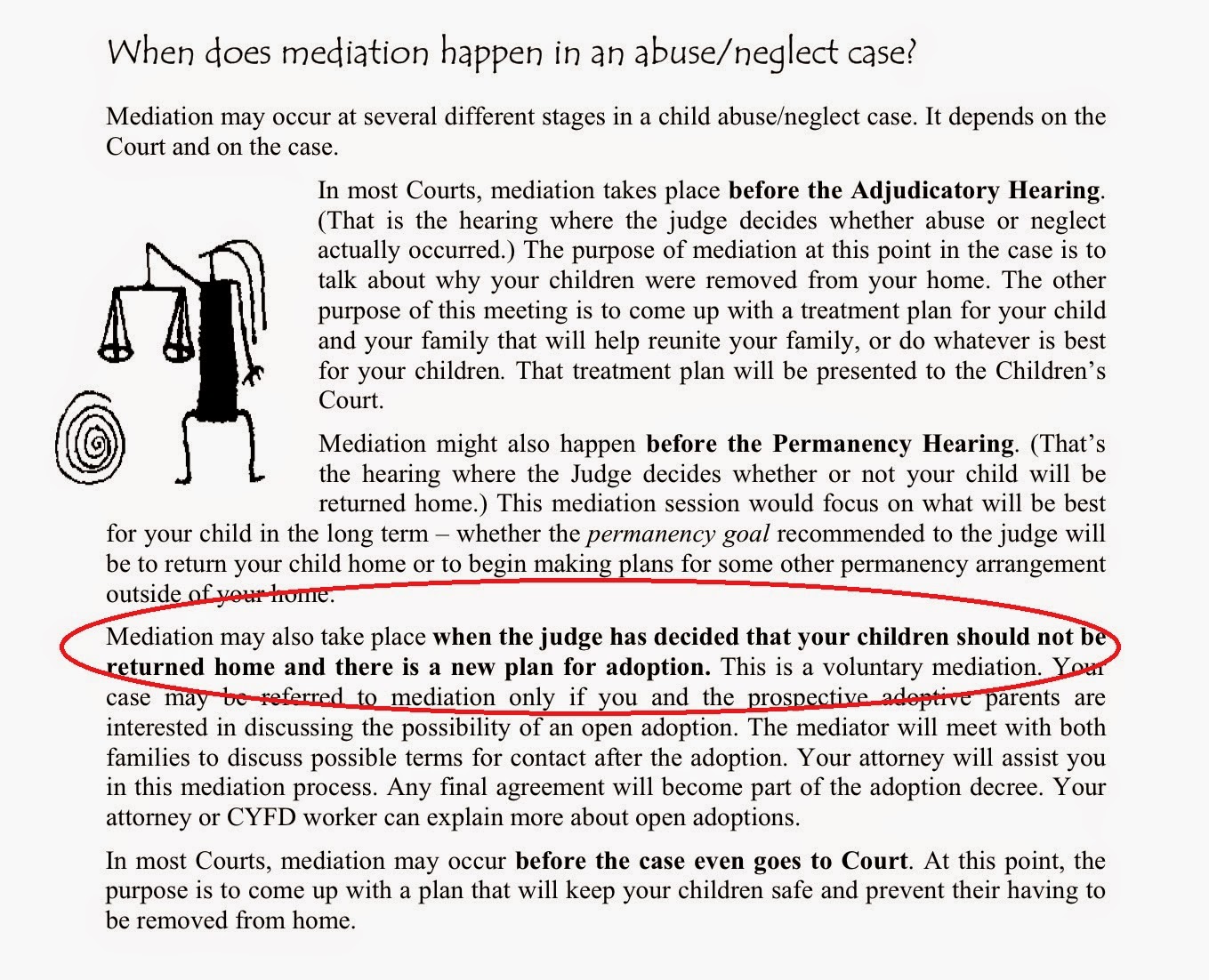 Basically, things aren't looking good for Jack and Jill's mom.  She could very well lose her parental rights.  But rather than having to put her through another trial where "evidence" is presented attesting to the fact that she's an unfit parent, the legal/child welfare system is giving her a chance to possibly voluntarily relinquish her parental rights and thereby avoid having to go through yet another trial.
Regardless of the outcome of the Mediation- whether she decides to relinquish her parental rights and we can agree on an open or semi-open adoption, for example, or if she wants to fight till the very end to regain custody of her children-  the results of the Mediation will then be presented to the judge at the next formal hearing known as a Pre-Trial Hearing.  Depending on that Pre-Trial Hearing, there will be another hearing/trial where it will be decided if her rights will be terminated or not.  But like I said, if she decides to relinquish then there will be no need for a hearing to Terminate Parental Rights.
At this point I think Jack and Jill's mother is going to keep fighting till she legally can't be given any more extensions or make any more appeals.  On the one hand, she knows her children have been well taken care of  in our home for over a year now and that our family loves them and she has expressed her thanks to me for that.  But even so, Jack and Jill are still her children (even though she hasn't been raising them for over a year now and they've spent more time in our home than anywhere else and she has never technically raised Jill nor has Jill known any other home than ours) and I can't imagine what it would be like to be told by a court of law- not just someone's personal unfavorable opinion of you-but through actual evidence and documentation and a legal trial- that you are unfit to parent and therefore, have to lose your children.  Even if much of where she is right now is a direct result of choices she's made, it's still a crappy place to be in.  For that reason, we've been trying to see things from her perspective. 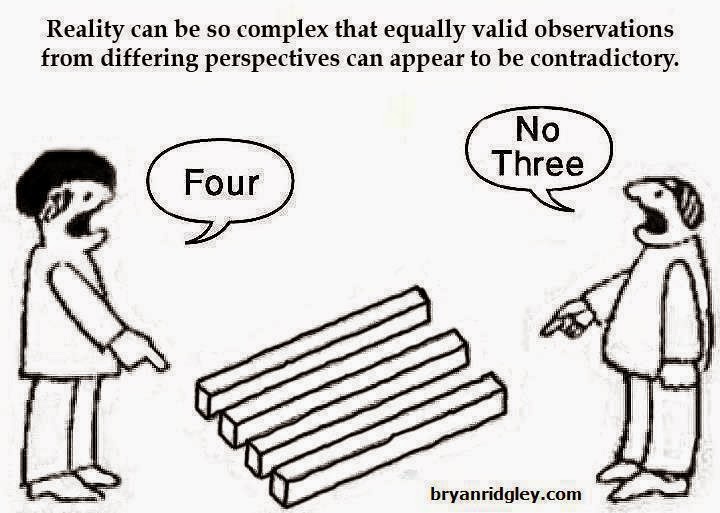 As for my perspective and my family's perspective, I think I've written enough in the past not just about Jack and Jill's case but with some of our other foster children about how difficult and emotionally draining the process can be of welcoming them into our home as helpless little strangers and loving them as if they were our own children while being very well aware of the fact that they aren't our children and then becoming attached to each other just to get our hearts broken when they leave and in some cases becoming sick with worry about the environment they're returned to live in.
This is a VERY emotionally-charged process for everyone involved and that is why I am very nervous for the Mediation but hopeful at the same time that at least concerns for the children can be voiced in the open and examined and there will be some communication even if there's no apparent resolution.  I guess in a way I'm thinking of the Mediation process as the beginning of closure which is a relief for me because I'm getting really impatient with things being dragged out when it's apparent to many what the best interest of these children is.
Summary/Timeframe of Upcoming Events in Jack & Jill's Case:
Mediation Hearing- End of January
Pre-Trial Hearing- Mid- February
And then . . . Who Knows?!
The Best Case Scenario is that we would be able to adopt them sometime in March of next year.  But we have learned that in the world of fostering and adopting NOTHING IS PREDICTABLE and there are always unexpected twists and turns. 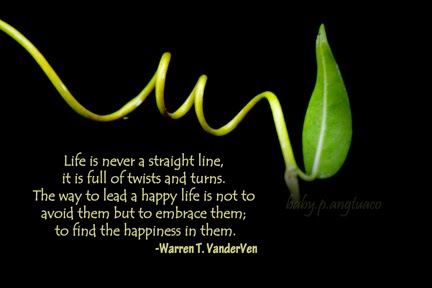 His Grace: Unplanned Pregnancy, Adoption, and "The Best Gift Ever"

I saw this video today and was once again touched and amazed at the tremendous amount of LOVE that leads to placing a child for adoption:

"Through a lot of prayer, and sleepless nights a lot of tears I finally came to the decision to place her for adoption."

"I got a glimpse- just a small glimpse- at  how much love God has for me, God has for my little girl, that God has for every single one of us. I never understood love until then."