Rose in Bloom/Change in Plans

Earlier this month as I dropped Rose off to a visit with her mom I was overcome with a lot of different emotions- (mostly grief-related) about the prospect of having to “drop her off” in the near future- FOR GOOD- and not being able to conveniently pick her back up a few hours later.  Although I was all alone in my car I was still somewhat surprised at how emotional I became because I like to think I’m much more calm and collected than I actually am and I pride myself on not showing too much emotion.  As I felt the warm tears starting to form in the corners of my eyes on the ride home I chided myself.
My inner dialogue went something like this:
You knew this placement was only going to be a couple of weeks to a couple of months max till she’s placed with relatives- so why all the fuss?
I know- I know . . . But even so, five weeks is PLENTY of time to get attached to a child when you’re the caregiver 24/7.  I just don’t know if I can handle fostering another baby again- it’s just too emotionally and physically exhausting.   Maybe we should only foster children rather than babies.
I proceeded to think about our previous toddler and pre-school age foster children and the advantages as well as challenges that such stages of development present.  True, there isn’t as much physical work involved as caring for a baby, but there is plenty of other emotional and social work in terms of helping them regulate and express their emotions appropriately, setting boundaries, and establishing a sense of routine and structure in their daily life.
Then again, I thought, Maybe we should just call it quits altogether as far as foster care goes.  I don’t think I’m strong enough to say “yes’ to one more placement only to have our hearts broken one more time.  If we knew we were done building our family then it would be different, but it’s such an emotional roller coaster trying to guess what might be in store for us in terms of if we’ll ever be able to adopt one of our foster children in the future.
Q:  Well then, why DON’T you quit?  Nobody’s forcing you to do this, you know.
I know.  But I just feel like I’m “supposed” to.  And there’s so many kids out there who need safe homes, and it’s really not that much of a sacrifice since we only have one child and we always have an extra bedroom.   I reminded myself of all of the other reasons why we’ve continued to foster.
As my soliloquy continued it became much more dramatic and I started feeling sorry for myself and even owned up to the fact I was feeling jealous of Rose’s mother- because she gets to have what I want most- a baby. . .  and I’m just the substitute mommy- not the real mom.  I’m “just” the foster mom.

Speaking of which . . . I recently came across the following picture which deeply resonated with me.  The caption read "A mama is a mama." 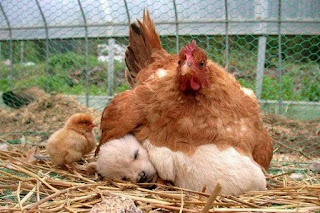 But I’m the one who gets up in the middle of the night to feed her and I’m the one who changes her diapers and launders all of her (and my) spit-up covered clothes, and I’m the one who takes her to the doctor, but what do I get in the end?  Nothing.
My self-pity began to escalate:
We voluntarily open our hearts and our home to caring for a baby and in the end we don’t even get to see her “bloom” –so to speak.  (I knew there was another reason I’d refer to her as Rose.)  And, of course, the timing for saying goodbye is just GREAT- her colic is slowly improving, she’s only waking up once during the night now, and she’s outgrowing her helpless newborn stage and entering the fun, social stage where she’s smiling at everyone she sees and cooing and starting to laugh.  And NOW we have to say goodbye?!
Perhaps I NEED foster care in my life to help me be less self-centered, more humble, less judgmental, more grateful, and in general, more loving- because it’s not the first time I’ve had such thoughts.  I eventually talked myself out of having such a martyr-like attitude and reminded myself that it’s better to have loved and lost then never to have loved at all.
Fast forward to a week ago:  Our family has been preparing to say goodbye to Rose, knowing that any day we would get a call from her caseworker letting us know that her relatives have been approved to  care for her and that we need to get all her things together so that she can be transferred into  their care.  Well, it turns out there’s been a change of plans.  Although both relatives did, in fact, pass their background checks, for various logistical reasons the Division decided it would be in Rose’s best interest to keep her with a fost-adopt family.  We were asked if we would be interested in having Rose in our home on a more permanent basis and we said “yes”.  How could we not?
So now it looks like we’ll have Rose in our care for a little longer- until the Permanency Hearing in Spring- and that will give us a little more time to see her “bloom”.
Posted by Mary at 7:44 PM

NO WAY!! I am shocked and completely EXCITED and ANXIOUS to find out what will come of that permanency hearing! AHHH!!!! I've been praying for your family, specifically that you will get an adoption placement. I would be completely TICKLED to know that this sweet baby Rose you've bonded to would become a permanent part of your family. I'll continue to keep your family in my prayers! Keep us posted!

You are so brave! I hope everything works out how it's supposed to!

Oh Mary. I know exactly what you are going through. When Little Dude was transitioning home it killed me. When that day finally came when I didn't get to go pick him back up it ripped my heart out. You are very brave and honest. It's our capacity to love even when we know we'll be hurt that makes us the right kind of foster parents. I am so excited that Rose will be in your home longer. Try not to focus on the Spring. Focus on loving her each and every day :) My prayers will be with you that the "logistics" will turn into a forever placement.

Thank you for your support, ladies! Julie, I will take your advice to "loving her each and every day" to heart!

Wow! What an inspiration... I have been praying about adopting/fostering for some time now. Your story is very moving. I will keep following and keep you and your family in my prayers :)