A few months ago I was deeply disturbed to read a local news story of a woman who had {allegedly} killed six of her newborn babies and then hidden their remains in her garage.   (A seventh baby was found but was a stillborn.)   “WHAT IN THE WORLD was going through this woman’s mind to do something so heinous?”  I wondered.

The emotions in my mind as I read that story were similar to what I felt when I came across the account I wrote about previously of a “discarded” (but living) baby in China- only this local case seemed much more bizarre and tragic considering there were multiple casualties, including the mother herself.  (Because let’s face it- nobody in their right mind could possibly do something like that.  And although mental illness, deep personal issues, and a lack of support never excuse someone from taking innocent lives, God is the only one who truly knows what drove this woman to take such a horrific path not just once but several times.)
Stories of child and infant abandonment, abortion, or child abuse and neglect in general always strike a particularly sensitive chord within me as an infertile woman and an adoptive and foster mother.  I’m aware of so many families who would give anything- and some who have given everything- to have a child or bring another child into their family.  Doubtless others who heard the disturbing news story also thought, as did I “Why couldn’t this woman have handed the babies over to the care of someone else or anonymously taken them to a hospital or fire station?”  Enter Safe Haven Laws.
Q:  What exactly is a Safe Haven Law?
I like this definition from the Child Welfare Information Gateway:
A:  “Baby Moses laws” or infant safe haven laws have been enacted as an incentive for mothers in crisis to safely relinquish their babies to designated locations where the babies are protected and provided with medical care until a permanent home is found. Safe haven laws generally allow the parent, or an agent of the parent, to remain anonymous and to be shielded from prosecution for abandonment or neglect in exchange for surrendering the baby to a safe haven.”
The first safe haven law in the U.S. was enacted in Texas in 1999.  Currently, all 50 states, including the District of Columbia and Puerto Rico, have Safe Haven Laws which protect babies from abandonment and infanticide.   For specific state statutes refer here: https://www.childwelfare.gov/systemwide/laws_policies/statues/safehaven.cfm
Brenda Horrocks is an adoption/foster care buddy of mine who recently shared her story of how their little boy, Spencer, came to be a part of their family.  Spencer was a Safe Haven baby and I thought Brenda’s words in this recent radio interview about the women, including her son’s birthmother, who use Safe Haven Laws to save their babies were very wise, especially considering the fact that all too often people (myself included) are quick to pre-judge women who may be faced with such a desperate situation.
Of her son’s birthmother’s decision to use the Safe Haven Law Brenda says:
“We know how much she loved him and just so thankful that she was able to make that hard decision for him because she was not at that time or currently in a place where she could be a parent.
There would have been no way for her to really make an adoption plan because she probably didn’t even know where to go for that ‘cause she was on her own.  This is a situation where she could give him what she felt like he needed and there in the hospital she had support- there were people there who could help her whereas outside in the world there wasn’t anybody.”
Of women faced with crisis pregnancies:
“Making this choice doesn’t mean you’re a bad mom.  Making this choice to keep your child safe and healthy and get them a happy life in this way is good parenting and that’s being a loving mother.  I think too often there’s too many voices out there saying how awful these women and girls are who hand their babies over or place their babies for adoption in the traditional sense. They look at them as bad people and they’re not- they are making the hardest decision anybody would ever have to make.”  -Brenda Horrocks
Click HERE to see a video clip of the Horrocks advocating for Safe Haven laws (and to see what a darling boy Spencer is).
In light of the gloom of the horrific story I recounted at the beginning of this post, I would like to share three short and inspirational clips, which, like the Horrocks family’s story of their last adopted child, focus on the HOPE that can come from what could have been tragic circumstances and beginnings for babies.
Grab some Kleenexes.

This last clip is the longest of the three but well worth seven minutes of your time.  Although it is technically a commercial it is based on a true story.


*TO FIND OUT WHAT THE SAFE HAVEN LAWS ARE IN YOUR STATE, (including who can relinquish a child, at which locations, and up to what age), CLICK HERE * 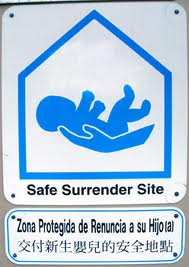