In my last post I wrote about the undeniable relationship between trauma and brain development.  I also posed the question:

"How can we apply it* to the way we parent, discipline, or teach the children entrusted to our care?"

*["it" meaning the knowledge of a connection between trauma, brain development, and survival mechanisms children coming from traumatic backgrounds often exhibit.]

I have some GOOD NEWS because last year I attended a training on Dr. John and Dr. Julia Gottman's "Emotion Coaching" which answers this exact question by teaching parents skills of how to be better attuned to their children's needs.

You'll notice that I didn't necessarily say, "How to FIX your child's behavior" but rather, how to be better attuned to your child's needs.  You see, behind every behavior is a NEED or EMOTION and unless you are aware of that, then fixing any behavior is just putting a temporary band-aid on the problem without getting to the route of things.  However, just as healthier eating is more likely to result in weight loss, being an Emotion-Coaching parent is more likely to result in less behavioral problems in our children because their emotional needs are being met.

While I'm on the subject, let me also take this opportunity to say that one advantage to being a licensed foster parent is that I am required to attend classes and trainings in order to keep my license current. Sometimes I go to the trainings just for the purpose of getting my hours in and I end up grumbling because it's something I am required to do, but other times I come away from a particular training thinking, "ALL parents could benefit from this!  Better yet, it was free training- I didn't even have to pay for a big conference fee for what I just learned."  Yes, there are occasional perks of fostering.  Last year when I attended the training on Emotion Coaching was one such example.

On to Emotion Coaching:

I remember first being introduced to Dr. John Gottman's work in college when we did some required reading for a course on Marriage and Family Relations.  My professor happened to be one of Dr. Gottman's former students at the University of Washington and when he told us about his former professor- a psychologist who, with his team of researchers, would analyze couples in a home-like setting and could predict divorce rates with amazing accuracy based solely on observing how couples interacted with each other I became an immediate fan of the Gottman Institute and Gottman's research.

What I didn't realize (or didn't remember) until I attended last year's Emotion Coaching Training is that Gottman not only focuses on marital relationships but on PARENTING as well!  If you are familiar with John Gottman's research about what factors make marriages thrive (and conversely, what behaviors lead to divorce, (e.g. The Four Horsemen of the Apocolpyse) then it shouldn't be too much of a surprise that these same behaviors apply to any relationship- not just marriage.

I must admit I didn't know much about his wife's work either until this particular training in which we watched her present through some video clips. Dr. Julie Schwartz Gottman is an accomplished psychologist in her own right.

Here is a definition taken from this complimentary workbook I got at the training: 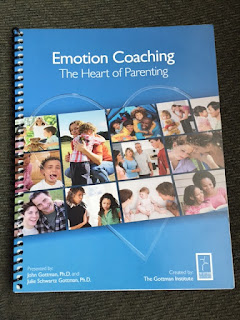 In a nutshell, the concept behind emotion coaching is for parents and children to realize that EMOTIONS AREN'T WRONG, but not all behaviors are acceptable.  Therefore, the emotion surrounding the behavior needs to be addressed before any possible troubling behaviors can be addressed.

There are five steps to Emotion Coaching, which are:

The goal of emotion coaching is for parents "to respond with empathy and understanding while setting limits on negative behaviors." -p. 23 of Emotion Coaching booklet.

Because this post is only an INTRO to emotion coaching I am going to focus primarily on the first step:

1.  Be Aware of Your Child's Emotions.

Guess what?  If you aren't aware of your own emotions then you will not be able to be aware of other's emotions simply because You can't teach something unless you have mastered it yourself.

In light of this fact, we did a few exercises from the workbook at my training which helped us to realize what "triggers" us as parents to experience high-intensity emotions.  Examples of "triggers" for me include: mornings in general when I'm trying to get all my children fed, bathed, and for those who go to school- out the door, and anytime I feel like I am "rushed".  Such instances are particularly stressful for me and I find my patience being tested as a parent.

Just as important as understanding one's own emotions is reflecting upon how your own parents or caregivers handled your emotions while you were growing up: Were they dismissing, disapproving, or emotion coaching?  In other words, did you feel comfortable expressing your emotions to them? Were there some emotions that were "okay" to express but others that weren't?  Did your parents acknowledge your emotions or did they dismiss them or even go so far as shaming you for expressing certain emotions?  Were you more comfortable going to one parent than another?  All of these are important questions to explore because they can help us gain insight into why we do (or don't do) some of the things we do as parents.  It was interesting for me, personally, to do some of the exercises in the workbook and recall patterns in how each of my parents raised me.

I also readily admit that I became slightly worried when I was able to acknowledge certain times in my own parenting career when I have been less than stellar as a parent and I would imagine in my mind the worst-case outcome: My children in therapy in the future recounting how their mean mom yelled at them that one time or didn't take the time to fully listen to them and how it ruined their life! I'm exaggerating- but only slightly.  Parenting can be full of so much guilt.

However,  even if you're not a perfect parent or you didn't have a perfect upbringing there is HOPE!  Emotion Coaching, like any skill, takes practice to master.  I was so reassured when I read the following paragraph in my workbook that I made note of it:

Because the Gottmans stress the importance of raising emotionally intelligent children it was not too much of a surprise to learn that they have worked closely with Dr. Dan Siegel, author of books such as The Whole Brain Child and Parenting from the Inside Out.

Raising an Emotionally Intelligent Child is the name of John Gottman's book which addresses emotion coaching.

Now for a brief example of actually applying what I learned about being an emotion-coaching parent:

After I cooled down a bit, it dawned on me that the issue of how my daughter was feeling about her homework should be more important to me than her actually completing her homework. (See what I mean about how it's important for you to be aware of any emotions, issues, or beliefs you might have first before trying to help others regulate their emotions)?

I knew my daughter wasn't happy- that was obvious [Step 1] so in an effort to find out more I asked her, "So, what exactly is it about doing your homework right now that is bugging you so much?"  (Looking back, I guess that would be skipping to Step 3).  IMMEDIATELY I noticed a difference in her countenance and tone of voice simply from the fact that I was inviting her to tell me how she felt about things rather than telling her what she should do.  She simply answered, "My homework is boring." in a calm and matter-of-fact voice.

I imagine that a skilled emotion coaching parent would go on to validate their child's feelings by saying something next like, "I hate doing boring things, too!  I get so sick of washing the dishes day after day." and then move onto the final step of problem solving.  [Step 5]  I must admit that I was a little slow with the process and was just glad to have some peace for a moment when she told  me what the real issue was without talking back so I was just quiet for a moment and let things soak in.

I think I did eventually say something like, "Even though you don't want to do your homework I'll let you choose which assignment you want to do first."  Yes, there may have been more creative or effective ways to deal with the issue- better yet helping my daughter to come up with a solution herself- but I was just happy that I had the sense to calm down and give my daughter a chance to express her emotions even if I may have still been trying to "fix" things.

I also realize that it says a lot about me that I was more concerned about my daughter finishing an assignment than I was about her actually being interested in what she's learning.  In fact, I think that's why I was so annoyed- because I knew she could do it and I value when people are dutiful and responsible and get things done.  Certainly brings up a good discussion of what constitutes true education- following up with an assignment and learning to be responsible even if it is just busywork or actually developing a love of learning.

One last thought about Emotion Coaching: In retrospect, sometimes it's okay NOT to have to fix things or come up with a solution right away.  Sometimes it's okay just to be there for your child and to validate their feelings.  (Easier said than done for those of us who want to make everything all better!)  Here are two examples that illustrate the skill of validating a child without dismissing the way they're feeling or trying to "fix" things: 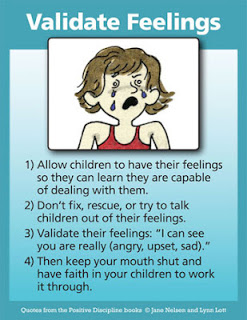 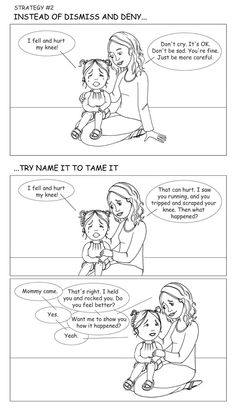 "Name it to Tame it"is a strategy Dan Siegel teaches.
Posted by Mary at 9:24 PM