Adoption Finalization is Just the Beginning

I have a dear friend and fellow foster mom who recently attended a Permanency Hearing for her foster children after having them in her care for a year now.  To say that my friend and her family have been on a constant year-long roller coaster ride would be an understatement.  You see, I think all fost-adopt cases where parental rights have not yet been terminated are bound to have twists and turns and a few surprises thrown in which can be especially hard to deal with if you’re someone who thrives on predictability and stability.  (I happen to be a big fan of predictability and stability, aren’t most people?)

In my friend’s case, the stability factor- not just for her own family but for the precious children in her care- can, at best, be described as “non-existent” as her case is an ICWA case.  As I watched my friend struggle with mixed emotions surrounding the case it brought back a lot of memories for me of cases past, specifically:


I think you get the idea of how my friend’s concerns echoed many of my concerns in the past.  And if you’re a foster parent you’re most likely nodding your head in agreement because you’ve been there.

One might figure that once parental rights are terminated in cases such as these or when the adoption is finalized that it marks the “Happily Ever After” or “The End”.  Although there is much relief at TPR or Adoption Finalization I have discovered that in actuality, it is just “The Beginning” of a lifetime of continued commitment to a child.

Yes, it is nice not to have caseworkers regularly come to your home to see if the kids are okay.  Don’t get me wrong- although the purpose of required home visits is necessary to ensure the well-being of children, sometimes as a foster parent it can feel a bit intrusive or even accusatory like, “We need to make sure that you aren’t doing anything wrong in your parenting.”

It’s also a relief when you don’t have to document every scrape or scratch your child gets for fear of allegations of investigations.  My rambunctious three year old, whom we adopted from foster care two years ago, recently took a nose-dive from our coffee table onto our floor.  As soon as I heard her crying out and her nose started swelling up I took her to Urgent Care.  While I was checking her in at the reception area I experienced a state of automatic, momentary panic and I thought to myself, “Whom do I need to call to report this injury?   What extra paperwork do I need to fill out?”  And then I remembered, “I don’t have to report this to anyone because she is MY child.  She is no longer in state custody.”  It’s funny how fostering for over a decade can alter your thinking.

Even when the doctor came in to examine my little girl and started asking, “So, how did this happen?”  I became somewhat nervous.  Was I being scrutinized?  When I explained that she is very active and she was just rough-housing he casually replied, “Injuries like this are pretty common.”  I was put at ease and realized that the doctor was just trying to do his job and get information and that yes, accidents do happen even in the presence of the most vigilant parents.  [Incidentally, I also learned that x-rays on a nose can’t be taken until 3-4 days after the swelling goes down to see if the nose is actually broken or if the septum has been pushed to the side.  In our case, we lucked out because it was just a very bad sprain.]

Dealing with birth parent visits, court hearings, home visits by caseworkers, and extra paperwork at medical and dental appointments are issues that I don’t have to worry about anymore since we adopted our two youngest children from foster care.  But that does not mean that the “work” is done or that the hard parts are completely over.  Rather, I have found that there is a continuation of work and dedication in meeting the needs and issues that my children and I will face. 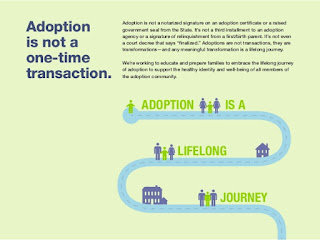