ACEs & The Protective Power of Connection

I have been fascinated with the concept of Adverse Childhood Experiences (ACEs) having an impact on physical health since I first heard about the groundbreaking study and acronym at a Child Abuse Prevention Conference I attended years ago.

Here's an infographic which serves as a good Cliffs Notes Version of ACEs:

The Truth About ACEs Infographic by RWJF on RWJF.org

As equally intriguing to me to learn about the impact of risk outcomes for ACEs, is just how the ACE study came about- so I'll tell you:

Dr. Vincent Felitti was a medical doctor and chief of Kaiser Permanente's Department of Preventative Medicine in the 80's.  Dr. Felitti ran an obesity clinic with the purpose of helping bring about dramatic weight loss without surgery in individuals who were significantly overweight- not just needing to lose 10 or 20 pounds but hundreds of pounds.  (On a personal note, the findings in Dr. Felitti's work with his patients is of particular interest to me since I have been both thin and obese throughout my life without any significant attributable physical explanation for my fluctuations in weight, such as a glandular disorder).

What Dr. Felitti found was that although his patients were successful at losing hundreds of pounds of weight with the aid of his methods, many of them would gain an extreme amount of weight back afterwards.  Long story short: Upon further investigation and inquiries, Dr. Felitti and his team of researchers discovered that most of his morbidly obese patients had been sexually abused as children.
After hearing the data Dr. Felitti presented about his obese patients in 1990, another medical doctor and epidemiologist from the Center for Disease Control and Prevention (CDC) by the name of Robert Anda encouraged Dr. Felitti to start a much larger study researching a more general population.  This was the beginning of the ACE Study which included more than 50,000 patients.  As a measurement tool, Drs Felitti and Anda spent more than a year developing ten questions for their patients about different categories of adverse childhood experiences such as physical and sexual abuse, physical and emotional neglect, and having parents who were divorced, mentally ill, addicted, or in prison.

[Any readers interested in discovering your ACEs score can use the ACES Too High website for a quick assessment.]

As one might conclude, children in foster care have a much higher rate of ACEs than the general public. In her memoir, Garbage Bag Suitcase, which I reviewed here,  Shenandoah Chefalo brought up ACEs.

So . . . speaking of ACEs,  I saw this Ted Talk a couple of weeks ago (during my night class to be exact) in which a doctor introduces the concept of ACEs to those who may not be familiar with them and I just have to recommend that you take 10 minutes and watch this clip all the way through to the end. I found it to be so inspirational and extremely pertinent to foster parents or ANYONE who works with youth.

So . . .  if research has shown that early secure attachment to caregivers is crucial to preventing addictions and major health problems later in life . . . 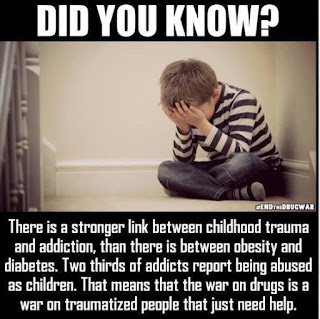 AND if we also recognize the sad fact that many children and youth do not have that kind of crucial connection in their own families to serve as a protective factor, the reassuring news, as illustrated in Dr. Allison Jackson's TED Talk, is that any caring adult can make a huge difference in a child's life- even if they aren't necessarily related by blood. This certainly includes teachers, neighbors, coaches, clergy, social workers, etc. 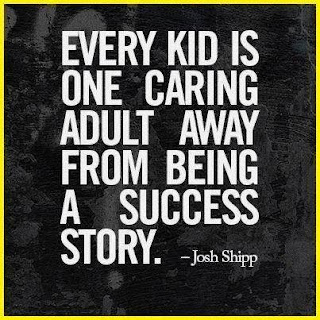 I was also reminded as I watched Dr. Jackson's TED Talk that in Heather Spencer's memoir, Ezra and Haddasah, which I reviewed here, Heather specifically noted that her level of hope and resiliency in overcoming her traumatic upbringing was greatly impacted by one single adult in her life- namely, her school librarian.

In his book, The Body Keeps Score: Brain, Mind, and Body in the Healing of Trauma, Dr. Bessel Van Der Kolk recalls the first time he heard Dr. Robert Anda presenting the results of the ACE study.

"The first time I heard Robert Anda present the results of the ACE study, he could not hold back his tears.   In his career at the CDC he had previously worked in several major risk areas, including tobacco research and cardiovascular health.  But when the ACE study data started to appear on his computer screen, he realized they had stumbled upon the gravest and most costly public health issue in the United States: child abuse.  He had calculated that its overall costs exceeded those of cancer or heart disease and that eradicating child abuse in America would reduce the overall rate of depression by more than half, alcoholism by two-thirds, and suicide, IV drug use, and domestic violence by three-quarters.  It would also have a dramatic effect on workplace performance and vastly decrease the need for incarceration."

Wow, right?  I'm not sharing all of this information to be a Debbie Downer or to guilt anyone into going out and fostering five children right this minute.  But I do think it's absolutely necessary to understand both the harming and healing power of early relationships. 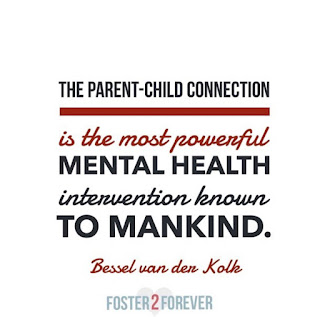 The hopeful news is that for those who may not have had a stable or loving environment with their parents or other adults in their life or who feel discouraged because their ACEs score is too high, how reassuring to know that you can still BE a loving parent or adult in a child's life.
Posted by Mary at 2:19 AM