I usually roll my eyes when I hear about another celebrity adopting because I'm a little cynical about their motives. Then again, maybe it's because I'm jealous of the seemingly endless money and resources at their disposal and their ability to travel anywhere in the world and "pick out" a child.

After reading Adoptee Voice I recently found out that Grey's Anatomy actress Kathryn Heigl is adopting a special needs baby from Korea. The blog post was well-written and echoed many of my sentiments, so I'll refer you to it here. 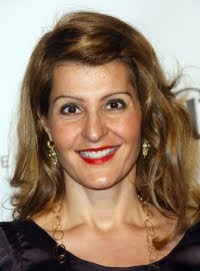 Since National Adoption Month is right around the corner, I want to put a plug in for Nia Vardolos (writer/star of My Big, Fat, Greek Wedding) who adopted a child from foster care last year. Here's what Nia said in an article which impressed me most:

"I was put in touch with a lawyer who works with, how shall I put this daintily... known people in my industry, and was informed I could be put at the top of The List and "have an infant within three days." But didn't that mean I would be moving someone down the list? Someone who had waited? Yeah, wrong."

Appropriately, Nia will be this year's National Adoption Day Spokesperson.
Posted by Mary at 2:28 PM