Here are a few of my favorite Mormon Messages which relate to foster care and adoption:

Great quotes about service from the first clip:

"Perhaps when we face our Maker we will not be asked How many positions did you hold?, but rather, How many people did you help?" 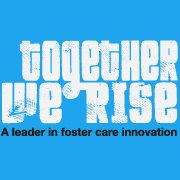 Together We Rise is a nonprofit organization dedicated to improving the lives of America's foster children by funding programs that give them a sense of "normalcy, comfort, and belonging"  such as purchasing bikes for foster children, providing sports equipment and sports camp opportunities for them, and providing resources to help  youth who age out of the foster care system.

The statistics for youth who age out of foster care are very sobering, as I've referred to previously, and as you will see from the following clip:


To learn more about Together We Rise visit their Facebook Page.  What a great cause!
Posted by Mary at 11:50 AM 4 comments

Our house has felt pretty empty now that we're back to a one-child family again so when our RFC called and asked if we were interested in providing respite care to a toddler for 5 days over Memorial Day Weekend I thought  "Why not?"
Foster parents can use respite care through other foster families when they are going on vacation or out of town and can't bring their foster child with them or if they just need a break.  I've heard caseworkers and others say that respite care is also a good resource and is recommended for foster parents to use to prevent from becoming burnt out.  Although we've used respite care before we've never taken any respite placements- until now.

When our RFC called about this respite placement- a 2 year old boy whom I will refer to as "Casey"- the only information I was told was his age and that he was brought into care because of DV (domestic violence) issues.  Consequently, I envisioned the worst-case scenario in my mind: lots of hitting, kicking, throwing, biting, etc.  However, I figured since my daughter has allready had experience with one physically aggressive foster sibling and this little boy would be younger and smaller than her, she would be able to hold her own and there would be no serious threats to her safety.  When I talked to Casey's foster mother and got some more info it sounded like any aggression Casey did display could be classified as typical 2 year old "I don't want to share my toys- I'm frustrated" aggression rather than any serious pathological violence to be worried about.  I also figured if this placement did end up being particularly challenging it was only for five days.

Fortunately, Casey was fairly easy to care for and he transitioned into our home quite naturally.  He was also a really cute little boy, by the way.   Although he and my daughter did have their share of  squabbles, for the most part they got along well and enjoyed playing together.

Casey did have a few tantrums/meltdowns, but they were short-lived and were almost always precipitated by trying to enforce a routine (bedtime, naptime) or trying to gently reprimand & redirect his behavior when he couldn't have things his way (like taking a toy from someone or hitting).  Two other bits of information that his foster mother shared with me beforehand which helped me understand where his meltdowns were coming from is that 1) He is an only child and not used to sharing and 2)  His mother was somewhat indulgent with him, so it's understandable that he would be upset when he didn't get his way all the time.

I pulled some tools out of my mental Love & Logic Parenting Toolbox and tried to put into practice a couple of parenting/relationship techniques on Casey when he would get upset. The first technique is simply to 1) Let him feel his feelings and validate them rather than trying to fix them right away.  The other practice was to 2)  Give him as much choice as possible in a situation so that he feels empowered and in control.  I'll elaborate on each.

As far as # 1 goes, letting him feel his feelings, I think many people have a tendency, when someone close to them expresses hurt, anger, or pain to try to "fix" the situation and make it all better- or even use a distraction so that the real problem doesn't have to be dealt with.  In fact, as a parent, I sometimes mistakenly believe that I must "protect" my child from any hurt or sad feelings she has because I don't want to see her in pain.  But realistically, what are the long-term effects and ramifications of brushing aside feelings and not talking them out?

Back to letting Casey feel his feelings: One instance where I let Casey simply "feel" his feelings without trying to distract him or make everything better is one night when he was having a particularly hard time at bedtime. He threw a tantrum about not wanting to go to bed, but underneath his frustration there was a lot of sadness and between tears he told me "I want my mom."   I was tempted to make everything all better by saying, "Don't worry- you'll get to see her next week at your visit!" and sound happy about it for his sake.  Instead I put my arm around him and said, "I'm sorry- that must be very hard. I bet she misses you so much, too."   But I couldn't just leave it at that.  The "fixer" in me had to add ". . . and you'll get to see her next week!"

Let me preface the next situation I had with Casey with these thoughts:   I think that a lot of times when a young child expresses a strong, unpleasant emotion by yelling or throwing a tantrum, the easiest and most automatic response a caregiver has is to do whatever it takes to stop the whining or crying.  Especially if you're in public and don't want to make a scene.  Sometimes a child's tantrum may be symptomatic of something else (that it's naptime, as a prime example, or that the child wants some extra attention.)  But many times- not always, but often- toddlers and little kids have learned to throw a tantrum with the express purpose of getting their way.

For example, say I'm at the checkout line at the grocery store and my child starts whining because they want a candy bar or treat.  I say "Not today." and their whining increases and turns into a full-blown tantrum.  How I wish this were just a hypotheitcal situation I'm using, but I am, in fact, speaking from experience.  Please don't tell me that you've never been "that parent" with "that child"!  As my child's tantrum escalates in loudness and intensity I sense (either imaginary or real) disapproving glances from onlookers that rhetorically ask, "Can't you control your child?".  Although I have tried, perhaps repeatedly, to set limits and tell my child "no" I cave in to avoid making a scene by grabbing a candy bar, tossing it into the cart and telling my child, in hushed and pleading tones, "Fine- stop crying."  My child does stop crying because they've gotten what they've wanted, but have I really "controlled" them- or have they controlled me?

Just as bad is when I don't give in to my child and because of this they begin moping or crying and I get even more of the judgmental "Can't you control your child?" looks.  I much prefer to get a warm smile, a knowing chuckle or even a "Been There Done That" look/comment instead.

So, having said all that, the other time I let Casey simply feel and express his feelings without shaming him or dismissing them was when he had what was probably his worst meltdown/tantrum the entire time he was with us. We also just so happened to be out in public- at a very crowded venue.

At one point (incidentally, naptime was approaching which didn't help matters) Casey started literally kicking his tiny legs and screaming at a pitch that rivals an ambulance siren, but rather than tell him to stop I decided to let him holler away till he got it out of his system. I was mindful, however, to push his stroller to a less crowded area so as not to disturb others.  I was hoping that the sunglasses I was wearing would magically deflect the obvious stares of those around me or somehow make me less conspicuous, but no- I could still feel those awful stares boring into me.  Perhaps I was a bit sensitive but I felt like holding up a sign in my defense that said- "Why, no, I can't control him. And incidentally, he's not my child."  Another sign:  "He's been separated from his family and is forced to live with strangers. Can you imagine the stress an adult- let alone a child- would feel if they were in such a situation?"  Which leads me to my final (and shortest) sign:  "HE'S TWO- give him a break!"

As far as the second technique of empowering children by giving them choices, I think it's especially important for a little person who is put into a situation which is totally out of their control (i.e. foster care) and they suddenly find themselves faced with diffferent routines, rules, norms, etc. to at least feel some amount of control and freedom of choice.  So, for example, when Casey protested getting ready for bed I would ask "Do you want to wear your Spiderman pajamas or your Cars pajamas?"  "As soon as you get into bed then I'll turn on the fish aquarium nightlite."   And then, of course, I would PRAISE HIM LIKE CRAZY for his choice: "I knew you could get in bed!  Now you can watch the fishies."  If he was sluggish coming to eat breakfast rather than getting upset (and annoyed) and telling him "Sit down and eat!" I would ask "What cereal would you like- this one or that one?  "Do you want milk or orange juice?"  It may just be little choices and seem like the simplest thing, but hopefully it helped to make him feel like he had at least some amount of control.

Incidentally, speaking of giving children choices versus controlling every choice they make, I remember reading the chapter in Bruce Perry's The Boy Who Was Raised as a Dog about the Davidian children he worked with from the Waco compund after they were taken into state custody. Because David Koresh and others were so controlling of so many aspects of their lives, when these children were faced with making a simple choice such as "Do you want a baloney sandwhich or a peanut butter and jelly sandwhich?"  they would become distraught and caught off guard because they weren't used to choosing anything for themselves.
Posted by Mary at 4:33 PM 8 comments