Earlier this week we got a call from DCFS about a two month old baby girl needing a home.  We said "yes" and a couple of hours later we were introduced to a beautiful, petite baby girl whom I will refer to as "Rose".
It's been interesting to see the contrast of Rose's olive-colored skin next to our daughter's alabaster skin.  And she is an itty bitty thing- especially when I compare her teeny, tiny fingers to our daughter's "big" pre-school fingers (which, Thank Goodness, still have plenty of traces of kissable babyfat pudginess on them, desite the fact that she's growing up far too quickly)!
The good news/bad news about this placement is that like our last one, it will be more of an emergency placement [perhaps for a few weeks according to the caseworker's estimate when I pressed her to give us a timeframe] until Rose can be transferred to the care of some relatives who can pass their background checks and whose home passes inspection.
Incidentally, this is our second placement where one or both of the birthparents are technically "homeless".  Living in a battered women's shelter is considered to be homeless by some judges, yet living in a homeless shelter is considered by other judges to be considered "adequate housing" for a child.  I mention this because I was at a training with other foster parents earlier this year and one of the foster parents shared their frustrations about foster children being returned to their birthparent's care despite the fact that the environment they are returning to is sub-standard and would never be able to pass the inspection, requirements, and scrutiny which a foster care provider's home is subject to.  The woman leading the training, who happens to be both a social worker who works with foster children as part of her career, as well as a former foster parent, reminded us all that what is legally required of birthparents is not quite at the same level of standards as what is required of us as foster parents.  She then related that in her work experience she once saw a foster child returned to their parent's care which happened to be in a homeless shelter.  Why?  Because it was, according to the judge, "adequate" she explained:  There was a roof overhead, a bed to sleep in, and meals were served on a regular basis.


It certainly begs the question:  What is considered "adequate" housing for a child?  I was surprised by that particular scenario of a foster child being returned to live in a homeless shelter, not necesariily because anything about the foster care system surprises me anymore, but mostly because of the fact that in most of my foster children's birthparent's Service Plans, the requirement set forth for their housing has almost always contained the word "permanent" or "stable" in front of the word "housing".  Thank goodness for homeless shelters and battered women's shelters-  I guess my point is that they are temporary housing and resources, but certainly not permanent . . . nobody is supposed to live in them forever.
I'm hoping for Rose's sake, that her new home environment with her relatives is much MORE than just "adequate."
Posted by Mary at 6:56 PM 4 comments 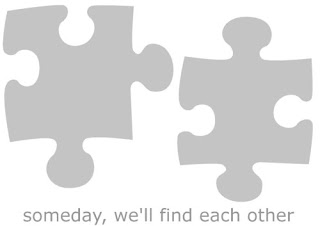 Karyn Purvis and The Connected Child

I have a new name to add to my list of heros: Dr. Karyn Purvis.  (For a quick bio click here).


I heard Dr. Purvis speak at a conference last month and was very impressed with the work she’s been doing (over the past 5 decades, nonetheless) with at-risk children- specifically children who were adopted internationally or through the foster care system and thus have a hard time attaching to caregivers and regulating their emotions.

Dr. Purvis and her colleagues from TCU have developed trust-based interventional techniques which are backed up through years of scientific research to help empower children who have experienced significant trauma.


I think it’s fascinating to study how the brain develops, and I’ve learned a little bit about how trauma can affect the developing brain thanks to books like this, child development theories, and a few trainings I’ve attended, so the science behind Dr. Purvis’s techniques is fascinating enough in itself.  But what impressed me most about Dr. Purvis was her truly Christ-like attitude about the children she works with.  In fact, I jotted down a couple of things she said which impressed me: 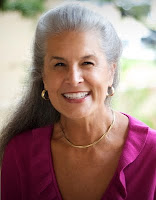 One word she used speaks volumes about her:  “Every child I’ve ever served. . . “  I don’t even remember the rest of the sentence but I was touched that she used the word “serve” rather than “worked with” “observed” or “associated with”.   Two scriptural verses, both from the Tenth Chapter of Mark, incidentally, come to mind:  Mark 10:14 and Mark 10:44.

The other thing I wrote down as I listened to Dr. Purvis speak is how she described her mission in life and what she is most passionate about:  giving children a VOICE.

“I take back violence from children by giving them a voice.”  she said.   It’s not about her- it’s about the children.  Love that attitude!  More specifically, the interventional techniques she uses have the objective of making children feel empowered and connected.

In her presentation, Dr. Purvis showed a sobering picture to illustrate the example of what it means to give children their own voice:  she showed a picture which a mother took in a hospital in Ekaterinburg, Russia in 2007 of newborn babies (orphans) with duct tape over their mouths so that their crying wouldn’t disturb the nurses at the hospital.  This picture was released to the press (Thank Goodness!) and a full-scale investigation was thus launched.

In that stark example, the babies had no voice-literally, not only because of the duct tape and plaster covering their mouths but because (and this was something new to me) if a human infant’s cries are not answered, then within 60-90 days they will literally lose their voice.


Children who come from traumatic backgrounds, such as being raised in an orphanage or spending their formative years bounced around from institution to institution or home to home in the foster care system, do have a voice but they don’t know how to use it.  In other words, their voice or the way they’ve learned to be “heard” and ultimately, to survive, is often through aggression, manipulation, or not attaching to others.

As I mentioned earlier, Dr. Purvis spoke briefly about how the human brain develops in children who have undergone trauma.  These children’s actions and behaviors are motivated by survival because the part of their brain which is most active is the area which centers on survival.  The sad fact is that some children (and adults) may not be able to access the “rational” higher-thinking parts of their brains (i.e. their cerebellum ) because they haven’t had as much a chance to develop so they have to rely on the more “primitive”, animalistic part of their brain to communicate their needs.

So . . .  when a foster child (or any child for that matter, but I keep thinking about our last foster placement, in particular, as I’m writing this) is constantly hitting or yelling in response to what seems like EVERYTHING it may not be that they are inherently violent and aggressive as much as they are trying to communicate something (fear, frustration, etc.) and aggression is the quickest and/or only way they know how.

The challenge, then, as caregivers to these children, is two-fold:

1)  To get past the child’s anger and outbursts and detect what’s going on inside.

2)  To help the children IDENTIFY what it is they’re feeling and VALIDATE and EMPOWER them so that they regulate their emotions, and express it in more appropriate ways.

Those challenges are easier said than done, but Dr. Purvis and her colleagues have developed tools to help the rest of us “lay people” attune to children’s needs and give them a voice. 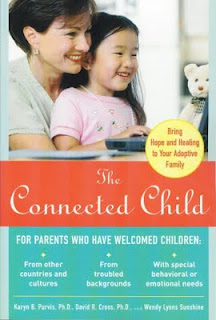 These tools are explained in the book The Connected Child: Bringing Hope and Healing to Your Adoptive Family, which Dr. Purvis and her colleague wrote.  I’ve heard this book mentioned before but I had never read it.  Needless to say, I’m looking forward to reading it and learning more about how I can help the children in my care feel more connected and empowered.  The Connected Child sounds like an invaluable tool for adoptive parents and foster parents and anybody who works with at-risk children.


Speaking of which . . . If anybody knows of any other helpful books or resources in dealing with similar issues, please share in the comments section!
Posted by Mary at 9:48 PM 4 comments