I Miss My Birth Mom

I have learned that some of the absolute WORST things to hear when you are suffering and have attempted to share what you're feeling with someone is: "But you shouldn't feel that way." or anything to the effect of "But it's in the past, can't you just get over it?" (Even if it's not stated that way but implied).

Such statements are entirely invalidating and not helpful in the least.  Plus, do you think that someone who hears those replies is going to be willing or even have the desire to confide in others in the future?

I had an experience earlier this year in which my oldest daughter (10 years old) was triggered by something that led her to tell me, with tears in her eyes, "I miss my birth mom."  I have to admit that my first reaction was to think, "But how can you miss her when we don't even have a very open relationship with her?"  [What I mean by that is if a child has a very open relationship with their birth parents and sees them on occasion then it would make sense for them to say "I miss my birth mom or birth dad." But what about situations where the adoption is closed or only semi-open?  How can they "miss" someone if they don't even have a face-to-face, personal relationship with them?]

I kept my thoughts to myself and consciously focused on my daughter's needs.  I recognized that this issue wasn't about me but about her. 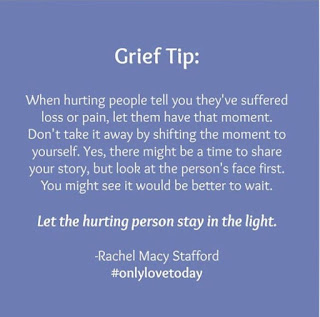 Some of the things I could offer up my daughter as I listened to here were "I'm sorry you're feeling that way." and "You know, I've never been adopted so I don't know what it's like to feel what you're feeling- I bet it's hard."  Later, she used that line with me and said, "You've never been adopted so you don't know how I feel!"  I suppressed a smile and agreed wholeheartedly.

I also admit that I have not always handled my reactions to my children's concerns as well as I would like.  Because who likes to see their kids suffering, right?  Sometimes it's not so much that I want to take away their suffering as that I want to "fix" the root of their suffering. So, since we're speaking about adoption related issues, I have on more than one occasion told my oldest daughter when she's expressed curiosity/loss about not knowing who her birth father is, "Well, at least you were adopted domestically and you know at least one of your birth parents.  Some kids who were adopted internationally or who were raised in an orphanage might not even know who either of there birth parents are!"  My intent in saying that was to get my daughter to look on the bright side and frame things in a positive way- but really, as helpful as my intentions could be, to tell any adoptee to "look on the bright side" could be very invalidating and translated to mean, "Your loss isn't that bad- it could be worse."  Again, not helpful to someone who is hurting.

I listened to my daughter and let her own her feelings but I have to admit- I still kind of wanted to "fix" things and make them all better- or if not making things "all better" at least doing something proactive about the situation.  I did offer up a suggestion that she write a letter to her birth mother. She was very excited to do so but I did oversee her and looked over the letter to make sure it was fairly neutral with content about what she's been up to lately, how school is going, etc. rather than asking "Why did you place me for adoption?"   That is a delicate and complicated question which will inevitably come up, but it is best to wait for her birth mother and her to have that conversation together in the future.

Now here's the tricky thing about navigating open relationships with birth parents: As an adoptive mom I can invite and share with my children's first families all that I want (or conversely, restrict contact between my children and their birth families), but I can never FORCE a relationship.  In my oldest daughter's case, her birth mother has been very respectful of our boundaries and as the role my husband and I have as M's parents.  We don't feel threatened sharing a child with her or feel that we are any "less" M's parents because she has another mom.  However, sometimes for my daughter's sake I wish that our semi-open adoption were a bit more towards the open side- which is funny because a decade ago the thought of having to share a child with another set of parents really bugged me and kind of freaked me out!

Long story short: M sent the letter to her birth mom (an actual old-fashioned letter mailed with a stamp- not just an email) and since the ball was in her birth mom's court now- so to speak- we just had to wait and see how things were reciprocated.  It was heartbreaking to witness M eagerly look forward to receiving a letter back in the mailbox day after day when none came.  The puzzling thing to me was that M's birth mom messaged me and told me how much she appreciated the letter and that she would be sending a reply.  But the reply was postponed and weeks turned into months.  Later, M's birth mom messaged me again and confessed that the reason she hadn't sent anything was because she was "struggling with the words to say".  Totally understandable!

The good news is that M's birth mom did eventually send a letter including some beautiful pictures of her family.  (The resemblance between M and her biological half-sisters is always fascinating for me to see).  I don't need to go into more details because that is M's and her birth mother's story to share. Needless to say, I was very relieved for my oldest daughter that her contact with her birth mom was both welcome and reciprocated.  What a relief for me and what a blessing for my daughter.
Posted by Mary at 9:17 AM 0 comments