I won a giveaway on mrs. r's blog! 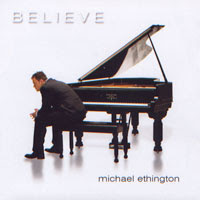 . . . which happens to be VERY appropriate since I've been battling a lot of doubtful thoughts lately (mostly regarding adoption):

*Is a birthmother EVER going to find us?
*Am I ever going to have more than one child?
*Is it ever going to become easier to say goodbye to our foster children?

Besides winning the Michael Eddington CD I have had a few other small, yet significant experiences lately which have reminded me to keep believing:

-I was at Michael's craft store the other day (Who needs the Dollar Store when you have Michaels!) and as I was walking past the "Dollar Aisle" I saw some really cute notecards with the word "Believe" written on the front in bright letters. It was just one simple word but it stood out to me like a beacon of light casting the shadows of my doubt away. (My, wasn't that poetic?) But I mean it- as corny as that sounds they really did brighten up my outlook. Of all the words in the world that one simple invitation to "Believe" was just what I needed to see. Before I left the store I put them in my cart.

- My two year old is obsessed with the Tinkerbell DVD her grandma gave her for Christmas, Tinkerbell and the Lost Treasure to be exact (cute movie by the way- a little pagan in nature but in an innocent Disney Fairy way rather than a Wiccan let's go howl at the moon way- no offense, Wiccans)


Anyway. . . the last couple of times we've watched the movie M. has turned to me and said "Mommy, sing it!" referring to the theme song played at the beginning and end of the movie. I started singing the first couple of words of the chorus in an exaggerated falsetto ('cuz there's some pretty high notes there) which I couldn't help but memorize seeing as how it seems we watch it at least once a day- but after I finished the phrase "If you believe . . . in who you are . . ." I realized I didn't know the rest. I tried to fake it and make up some words but my daughter didn't buy it. I confessed that I didn't know the words and I promised I would learn them.


Upon further research I learned that the song is called "If You Believe" and it is preformed by Lisa Kelly, who happens to be on of the "Celtic Women". As I listened to the lyrics of the chorus I found them to be really quite inspiring:

If you believe in who you are,


who you were always meant to be.


If you open up your heart,


then you'll set your spirit free.

In this time of the season,


every leaf on every tree,


will start to shine, come and see,


take my hand, come with me and fly.

And the song really is quite beautiful. Take a listen.

I know, I know- just like the "Believe" notecards I found at Michaels- it sounds so CORNY, but listening to that song was another small but significant reminder to me to believe- and more specifically to believe in myself.
Posted by Mary at 8:16 PM

Email ThisBlogThis!Share to TwitterShare to FacebookShare to Pinterest
Labels: hope