There’s an inspirational music video which has been circulating around the web recently featuring two women who have both suffered some pretty huge trials in their lives.    One of the women is Stephanie Nielson (commonly known as Nie Nie in the blogosphere) and the other is war survivor and refugee, Mariama Kallon.


Although I have never seen Mariama Kallon speak in person, I have heard from others who have heard her share her story firsthand and/or read her book, Delivered by Hope, just how imspirational and truly amazing her attitude is- the key word here is attitude.  And anyone who is familiar with Nie Nie's story knows how she has always maintained a positive attitude since her accident.

The video I’m speaking of is from Christian artist Hilary Weeks and is called Beautiful Heartbreak.  Incidentally, I happen to have a very talented sister-in-law who contributed her mastery of the violin to the String Section of this particular (as well as many other) soundtracks.
Regarding the title of this song:  if you’re like me your first instinct is to think that the words “beautiful” and “heartbreak” most certainly don’t belong together; It’s an oxymoron.  There’s certainly nothing beautiful about getting your heart broken and having your hopes dashed, right?   However, as I proceeded to watch this video my heart was touched and I understood the message behind the phrase “beautiful heartbreak”.  The words to the chorus in particular seemed to speak to me:
Every fear, every doubt, All the pain I went through
Was the price that I paid to see this view
And now that I’m here I would never trade
The grace that I feel and the faith that I find
Through the bittersweet tears and the sleepless nights
I used to pray that He’d take it all away,
But instead it became
A Beautiful Heartbreak.
I also thought it was very powerful to see Nie Nie and Kallon hold up framed hand-written signs for the camera describing what trials they had gone through and then- as a direct result of consciously choosing to maintain a positive attitude despite their trials- they held up additional signs at the end of the video with words describing some of the beautiful and good things they could focus on, in spite of, and in Mariama’s case, as a direct result of their trials.
Just as touching to me was the montage at the close of the video of many other women (and a sweet little boy) who would look directly into the camera without speaking and hold up hand-written signs of some of the battles and heartaches which they were facing or had faced.  A powerful technique, which, incidentally, has also been used in this website which I was referred to after a woman posted this picture on her blog: 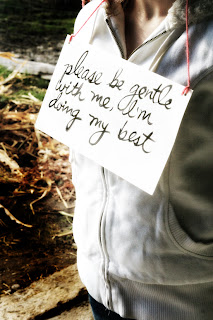 What a great reminder that you just never know what other people are struggling with, despite how “together” they appear.  As the words to a favorite hymn state “In the quiet heart is hidden sorrow that the eye can’t see”.   You just never know.  Or, as this quote states:

[I’ve always liked that quote, but when I heard it was attributable to Plato I suddenly liked it even more – as if his thoughts deserve more credence than the rest of ours do!]
So- what does the concept of a beautiful heartbreak have to do with my experiences as an adoptive and foster mother?  Quite a bit, actually.  If I were to make a list of the five hardest things I have ever had to face in my life infertility would definitely rank at the top if the list- perhaps second or third.  And although infertility is not a prerequisite for doing foster care or adopting as I mentioned in this post, the fact of the matter is that if my life had been different than the way it has turned out- namely, with a house full of children I had given birth to all conveniently planned and spaced two to three years apart- I would probably be too busy to ever consider doing foster care or adopting.  Perhaps not- but I’m just guessing, based on what I know about my own capabilities and limits.
Heartbreak is such an appropriate word to describe infertility.  Infertility is lonely.  It’s alienating and discouraging.   In a word, it’s . . .  heartbreaking.   When you find yourself in the position of not being able to have what you’ve always wanted most (children) let alone what you’ve always expected would come naturally you start to question not only your worth but your worthiness.
You feel like an outsider when compared with most other women (that’s my first problem right there- comparing my situation to someone else’s, Why do we do this?)  WOMEN- STOP COMPARING YOURSELF TO OTHER WOMEN because usually such comparisons focus on someone else’s strengths or blessings compared to our weaknesses or seeming “lack” of blessings!

Yes, infertility can make you feel inadequate- lacking- and even broken inside.
The good news about my personal “beautiful heartbreak” with infertility is that my desire to be a parent far outweighs my desire to experience a pregnancy.  I am grateful for adoption- beyond words.    Without adoption and the selflessness of my daughter’s birthmother I would never have the chance to be a mother.

Furthermore, the desire to “mother” in me is so great that I’ve been given the opportunity, through foster care, to help parent six children, aside from my daughter, over the past five years.  Of course it’s hard when we have to say goodbye to our foster children, but it’s better to have loved and lost than never to have loved at all.  [At least that’s what I have to remind myself when I need an attitude check concerning foster care because I feel like I’m just too emotionally exhausted to say “yes” to one more placement.]
The other night as I was putting our foster baby in her bassinette after a middle of the night feeding I thought “This bassinette sure has gotten a lot of use over the past few years.”  I did the math (no small feat considering it was probably two or three in the morning and my mind was not in prime condition) and calculated that it had been used by four babies in four years.  That’s pretty much on par with the Duggar’s rate- Not Bad!  Then I sarcastically thought to myself, “It’s because I’m so fertile!” because I know, realistically, that just the opposite is true- it’s because of my infertility that I’ve been able to care for four babies in four years.
So, if I had to make a video of my own personal heartbreak with infertility, modeled after Hilary Weeks’ Beautiful Heartbreak- [technically the credit goes to director Jed Wells] I would start out somberly looking into the camera and holding up a sign that reads:
“Infertile”
I’m not quite sure how to fill up the middle, although I can think of some pretty dramatic images of negative pregnancy tests, intrusive doctor examinations, being surrounded by a room full of laughing women at a baby shower while trying to hide my pain behind my smile, etc.  but I DO have an idea for the ending scene:  I would be kneeling over the bassinette and I would gingerly kiss a baby’s forehead and lay him or her down to sleep and then hold up a sign with a contented look on my face and it would read:
“4 babies in 4 years”.
Granted, they haven’t all been my babies and I’ve only been able to “keep” one, but as I reflect upon some of the blessings that have come from something as heartbreaking as infertility, nurturing those four precious babies has most definitely been one of them.
Posted by Mary at 7:56 AM

I love this! I love that song also. As I watched it I remember thinking the same thing--What if we all had signs? What would they say? Amazing.

Beautiful post. Thanks for sharing your heart. I thought about all the women I know who are unable to have children biologically when I saw that video. What incredible women they are with so many talents to share.

But the thing I love about the Lord is He helps us grow into who we need to be with our own personal trials. And growing into a beautiful daughter of God that is able to love children when you know they may not be able to stay with you is a talent that not everyone can posses.