This week as I took Jack and Jill to their weekly supervised visit with their parents I pulled up to a bright purple sign in front of the DCFS building which read "OCTOBER IS DOMESTIC VIOLENCE AWARENESS MONTH."

I found the sign highly ironic (and sad) considering that the babies would actually only be meeting with one of their parents for their visit that day since the other parent was put in jail over the weekend for . . .  you guessed it: a domestic violence incident.

Yes, not only is October National Breast Cancer Awareness month but it is Domestic Violence Awareness Month as well. 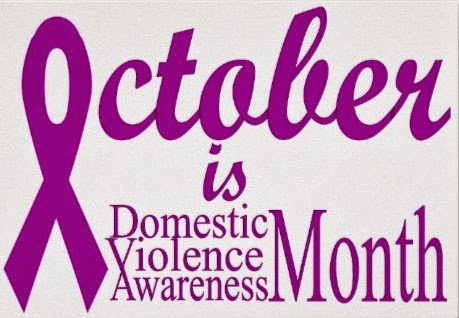 When I think about it, I would estimate that 90% of our foster placements have come from families where domestic violence was involved.  Furthermore, do you know what else those 90% of placements have had in common?   They have all had parents struggling with drug addiction. I think that's not a coincidence.

Mind you, I'm not saying that anyone who uses any type of drug will automatically beat their family members and become violent, but I definitely believe that certain types of drugs- meth in particular- produce such dangerous side effects such as violence, paranoia, and aggression that it seems it's not just by chance that users are at a huge risk for becoming violent towards family members and those closest to them. In other words, meth use and domestic violence seem to be causative in their relationship rather than correlative.

Case in Point #1 from my experiences fostering:

Of the 90% of children we've fostered (basically all but one) who have come from a background of drug exposure AND domestic violence methamphetamines was the children's parent's drug of choice. In at least two of these cases (that I'm aware of) the domestic violence escalated to the point of the mothers having to seek safety in a domestic violence shelter.

Case in Point # 2 from my experiences fostering:

About a month into our very first placement when we were fostering 3 year old "Justin" we were able to look extensively at his parent's files- including their criminal background records- since we were told by his caseworker that we would most likely be adopting him (ha!) and thus we were privy to as much information about his background as possible. While I was looking through his parent's files (one of whom had been placed in foster care as a child and hence had a longer recordable history with the state) I was struck by the number of D.V. incidences the police reports and mental health assessments recorded.  And lest anyone assume that the male is always the instigator in cases of domestic violence, I discovered that it wasn't solely Justin's father who became violent but both parents towards each other.

I remember Justin's caseworker telling me something which really struck me: "Yes, they have a lot of DV incidents on their records but they didn't actually become violent in their relationship until AFTER they started heavily using meth." I might also add that one of the mug shots I saw of Justin's mother was almost unrecognizable to me compared to the young woman I would see at his weekly visits.  Justin's mother no longer looked haggard looking or as "hardened" as she did in her booking photo and she was definitely at a much healthier weight than she had previously been. Mind you, Justin had been in care for three or four months in a different foster home when he was placed with us and the threat of losing their parental rights to their only child was a huge motivating factor for his parents to work hard and turn their lives around. They both made significant process as the Permanency Hearing drew closer.

Case in Point #3 (not from my own personal experiences but from data from this four-part article I stumbled upon when I googled "meth and domestic violence") entitled Methamphetamine: What are the Real Costs to Society?

"Family and close friends are often targets of the meth-user's violence.  Police in Contra Costa County, California, report that nearly 90% of the domestic calls they investigate are methamphetamine related."

Again- a 90% statistic- that's undeniably convincing. Coincidence? I think not.

In light of these facts, imagine the further irony I found when I learned just a few days ago (from a friend's Facebook status who happens to be a mental health professional) that not only is October Domestic Violence Month but it is also Substance Abuse Awareness Month. Seems like these two serious plagues to our society which have the potential to destroy families often go hand in hand, right?   Or for any cynics who might disagree with that assertion (because one might think there's no harm in a mom or dad drinking a couple of beers after work or having a glass of wine without resulting in a D.V. incident or that less "dangerous" drugs such as marijuana don't produce as hazardous side effects as meth and opiate addiction/withdrawal does) perhaps it is more appropriate to say that although substance abuse may not be a proven cause of domestic violence it is certainly an exacerbating factor.

With this in mind, wouldn't the logical argument follow that if our society were to reduce the amount of substance abuse and addiction then we would in turn reduce the number of families who suffer from the ravages of domestic violence?  Perhaps it's too simple of a solution since so many other factors are at play but it seems like it would make sense to try.
Posted by Mary at 6:01 PM