(I wrote this less than two weeks ago but didn’t get around to posting it till now; If you read till the end you'll see why my emotions are ALL OVER THE PLACE)


Today I dropped Jack and Jill off to their first transitional visit (outside of the DCFS office and without the supervision of their caseworker) in preparation for them returning to their mother’s care.  When I got out of the car their mother was holding a small bouquet of roses and handed them to me: “These are for you.   Thank you, Mary.”
I was totally caught off guard.
I’m not a hugger but I was almost tempted to move closer and give her a hug had it not been for the fact that I was also balancing a baby on my hip and had my car keys in one hand and was getting ready to get Jack unbuckled from his car seat and like I said- it totally caught me off guard so I just found myself saying, “That was sweet of you!” out of genuine surprise and sincere appreciation.
The flowers are beautiful.  But as nice (and unexpected) as it is to be appreciated, when I look at the flowers they also make me feel sad inside as if they are for a funeral or are some sort of a consolation prize.  In other words, they aren’t just an expression of “Thank You” or “I’m thinking of you” but of “I’m sorry for your loss.” 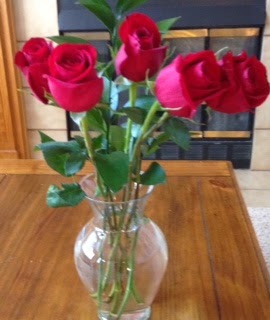 To me, the flowers and their mother’s thank you seem like the easiest way to communicate, “Thank you for watching my children for over a year now as if they were your own.  I know it must be hard for you-  now that they’re coming back to me” without actually having to say something like that out loud.
Perhaps that’s what hit me so hard each time I looked at the flowers- the realization that Jack and Jill will be leaving because they’re not mine to keep and it’s time to let go . . . once again.
On a more hopeful note (because sometimes I worry that this blog is too depressing or might discourage others from fostering since I don’t just share the rosy experiences), the flowers also remind me of a gift Rose’s mother gave me after Rose had been in my care for about a year and reunification was approaching: She gave me a small plaque with the words “Faith, Hope, and Love- the greatest of these is LOVE.” and the reference of 1 Corinthians 13:13 at the bottom.
UPDATE:  Today as I was returning home from an unsupervised visit, Jack and Jill's caseworker called me to inform me that the children will no longer be having visits outside of the DCFS office with their mother.  I became slightly panicked and thought, "Oh no- something happened to the kids during one of their visits!"   When I asked what was going on I was both relieved for the children and saddened for their mother to learn that although nothing had happened to the children, because of a recent discovery concerning their mother's progress, transitional visits will be coming to a halt.
Court is 15 days away.  And so the roller coaster continues.
Posted by Mary at 1:19 PM

Praying for you, Jack and Jill and their mom. Gracious, but the roller coaster can be so hard to ride sometimes.

oh wow. The update. sigh. God give your courage.

Thanks for sharing more than just the ups! We're getting closer and closer to stepping onto the roller coaster... Yeee haaawwww! ;)

Thanks for helping to prepare me for what's ahead.

Foster care can really tear you in two Emotionally. Once you think you know something it is bound to change. I think giving the kids up when they reunite is easier than not knowing if they will or not. It's so confusing.I feel your pain.

I'm so glad I found your blog, I myself am on the roller coaster ride right now! Thank you!

Always such a roller coaster. I think it is important to keep it real. Have you heard the song Hardest for Me by Michael Mclean? I listened to it a lot when we thought Nevaeh was going back to her birth parents. It's a hard place to be in when you love someone else's children so fiercely and know that your heart wants so badly to be their parent but that for that to happen means that someone else failed. Foster care is by no means easy especially when it is done correctly. Praying for all involved.