Together WE Are Motherhood

Over seven years ago my husband and I met our daughter’s birthmother for the first time, in the hospital, just three days after she gave birth to our daughter.  This brave, strong woman was in the process of relinquishing her parental rights to her baby and I am so relieved that she had at least two days in the hospital to spend with her newborn baby girl- holding her and welcoming her into the world; in essence having the chance to say “hello” before saying goodbye.

Among other important matters the day of our initial face-to-face meeting with our daughter’s birthmother, we discussed openness in adoption and considered what might feel most comfortable to everyone involved since none of us had any previous experiences to draw upon.

I think nowadays most adoptive parents who adopt privately probably have a chance to speak with expectant parents, get to know them, and get a feel for how each other feel about such complex issues as contact and openness well before the baby is born, but in our case our daughter was born premature, so her birthmother didn’t have a lot of time to get to know the couple she chose to adopt her baby and even consider such important matters with us until after our daughter was already born.

Over the last couple of weeks my husband and I have seen tears on another mother’s face as we’ve had the same type of discussion regarding how much contact to have if we are to adopt her children, with the issue of “What kind of contact would be best for the children?” at the forefront of the discussion.  Our current situation, however, is completely different than our first adoption because unlike our first adoption, this time the mother is our foster children’s biological mother and she has not voluntarily chosen to place her children with us.

Our foster children have been in our home for almost 18 months now and after being given more than one extension to complete everything required of her to get her children back into her care, their mother now faces the difficult option of either relinquishing her parental rights so that we can adopt her children (because guardianship or adoption by relatives is out of the question this far into the case) OR she can go through a formal legal trial where, most likely, her parental rights will be terminated anyway based on evidence and testimony that she is unfit to be a mother to her two children who are in our care.

I’ve never been to a TPR (Termination of Parental Rights) Hearing before but I hear that they are pretty awful to witness.   After all, as parents- and mothers in particular- don’t we all have a tendency to be too hard on ourselves when it comes to what we’re doing “wrong” in parenting rather than focusing on all of the good we do for the children in our care?  Imagine being told BY A JUDGE IN A COURT OF LAW that you can no longer legally parent your children because you’ve already endangered them and "messed up" too many times before.  That has to cut deeply.

The other factor that makes this pending adoption vastly different than our first adoption is the fact that our foster children will have already had a relationship with their mother if/when they are adopted.  Their mother is the woman who gave them life and brought them into the world (something which I have never personally been able to do for a child) and because of that she will always be known by the sacred title of “mother” to them.

However, as their foster mother I am also a mother to Jack and Jill- I have been for all of Jill’s life and more than half of Jack’s short life so far.  They call me “mama” but they also refer to their mom as “mama”.  Although she’s their biological mother and will always have that crucial role in their life their relationship with her is more like with that of an aunt or a close family friend.  At their supervised visits each week she is delighted to see them and tell them how much they’ve grown.  She hugs and kisses them and plays with them and will spoil them with too much candy and junk food (What little kid wouldn’t be excited for such a visit?!)  But I’m the mom who makes sure they’ve brushed their teeth or eaten their vegetables.  I’m the mom who cleans up their throw-up when they’re sick or who reads them stories and sings them lullabies before bedtime and kisses their owies better.   The fact that she can’t tuck them into bed at night or even have a visit with them without caseworkers taking notes on any “inappropriate parenting behaviors” must be very painful for her.

She is the mom who gave her children life but I am the mom who parents them.  It has not always been easy to share these little children with each other- jealousies and possessiveness are bound to come up when not kept under check- but the one thing that unites us is our love for Jack and Jill.  To quote Desha Wood one more time, “He is mine in a way that he will never be hers, yet he is hers in a way that he will never be mine, and so together, WE are motherhood.”

Regardless of the differences in our first adoption and our pending forthcoming adoption do you know what both biological mothers of our daughter and our foster children have in common?  It’s pretty simple, really: They both love their children.

I was sure to tell Jack and Jill’s mother that if we did adopt her children we will always make sure Jack and Jill know how much she loves them.  It was important for me to stress this to her because I think she equates relinquishment and adoption with abandoning her children and “giving up” rather than with selfless love and putting the needs of her children above her own wants.  Unfortunately, loving a child is not the same as being able to parent a child or keep them safe; hence the need for placing children in foster care in the first place. 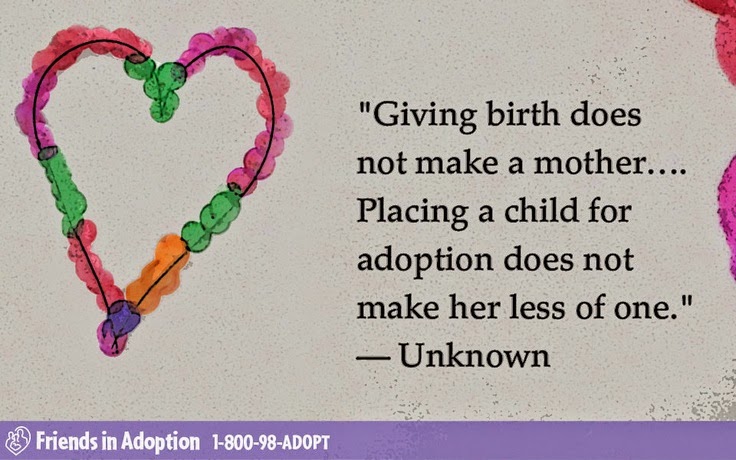 Jack and Jill’s mother gave me a hug and had tears in her eyes the day we brought up the possibility of her keeping in contact with her children if we adopted them.  It’s not the first time she’s expressed such gratitude to me before.  Although she didn’t say one way or the other whether she has decided to relinquish her parental rights or if she wants to pursue fighting the state’s recommendations to terminate her parental rights at a forthcoming trial, we will learn what happens next week at the scheduled Pre-Trial.

I have been reading your post. We adopted my son and I struggle with how much contact we should have with his birth parents. It was a relative adoption. The parents blame me for losing their son. I want him to have contact with them but I don't want them to turn him against me. I love reading your blog! We are opening our home back up as foster parents once we move to Ohio. Good luck with jack and Jill. Praying for you guys. Katie

Thank you, Katie. Best of luck in navigating such a delicate situation with your son and his birth parents!

I'm so glad I found this blog. We are just starting our adoption journey through DHR and we have a ton to learn.

I love that Desha Wood quote. I may questions some of my son's birth Mom's decisions, but I have never questioned her love for him. Thanks for sharing so honestly!

Your care and respect for your foster children's biological mother is beautiful. As a foster mom, I had a difficult time understanding how parents who love their children can make decisions that harm them so much. And yet, their love is obvious! It's heartbreaking. I hope that the biological mother in your situation makes the decision that is best for the children, for her, and for your family. Thank you for sharing.

We don't know one of our children's first mother and I would rather know and have some contact than nothing at all. Even in the challenges of open international adoption, we can communicate with my other children's first mom and there is so much love. Thank you for sharing your experience.