In her autobiographical book Ezra and Hadassah: A Portait of American Royalty, Heather Young (known by her birth name Hadassah for the first years of her life) offers her readers a sobering glimpse into what it is like to be a young child in foster care.

From the first chapter of the book Heather recounts,

"Living as a foster child means the quality of your existence relies on the moods of those you share space with.  If it goes particularly bad for even one day, you can be packing your bags the next day, forced to leave over something you had no control over.  On the good days, the carrot of possibly making you a permanent member of the family is dangled, only to be yanked away on the next down day.  It is not unlike a yo-yo, constantly going up or down, never staying still."

Heather and her older brother, Rex (who was known by his birth name Ezra for the first nine years of his life) lived in a foster home in Portland, Oregon during the 1970s from the time they were roughly pre-school age until they were seven and nine years old.  They were then transferred into the care of a different foster home in the same state which became their permanent adoptive home. 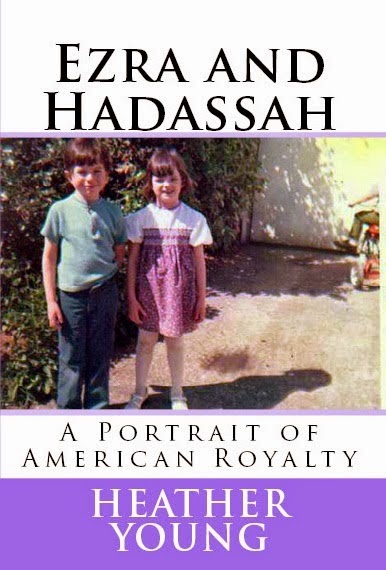 Heather and Rex came into care not because of neglect or abuse but due to the fact that their mother was paranoid schizophrenic and their father was developmentally challenged.  Their situation was somewhat atypical of most foster children because before living in their first foster home full-time they stayed there during the day (much like a day-care arrangement) and would go home to their parents home at night.  Even when they lived in their foster home full-time they went "home" for the weekends to stay with their biological parents.
Heather describes her first foster home as having seven or more rotating children at a time made up of her foster family's biological children and both the longer and shorter term foster children who stayed in the home anywhere from a few days to a few months at a time.

"The thing about the short timers is they never had luggage.  Their clothes and shoes and toys were always transported in brown paper grocery sacks. I thought that was terrible."

Although the time frame for this book first takes place in the 1970s, sometimes change is slow and unfortunately, even today- over forty years later- many foster children move their belongings from place to place, including the homes they are originally removed from, in nothing but a black garbage bag.

Rex and Heather's foster home consisted of three bedrooms- a master bedroom for the parents, a bedroom for the boys, and a bedroom for the girls.  Heather recalls "Since we had no closets or dressers in our bedrooms, the kids' rooms had plenty of space for several rows of bunk beds in each."

As a foster parent when I first read "we had no closets or dressers in our bedrooms" I was a bit taken aback and thought, "Wait a minute- how did this family get licensed in the first place if the children in their home didn't even have personal space for their belongings?"  I had to remind myself that this was foster care back in the 1970s and not in our modern day. Were Rex and Heather to enter foster care today, Heather's foster home certainly would not have met the qualifications to provide foster care- which brings me to one of the predominant major themes/thoughts that kept coming to my mind as I read the book:

Heather and Rex's first foster home had little or no structure (no rules and no schedule) a foster father whose favorite hobby appeared to be drinking beer, and two biological teenage sons who molested their younger and very vulnerable foster sisters. At just six years of age and shortly before her first runaway attempt, Heather came to the conclusion that:

"As a foster child you have no power.  You are living at the whim of others.  If you rock the boat, accusing the real children of bad things, they wouldn't be the ones leaving, you would. I couldn't risk losing what little security Ezra and I had."

"I didn't want to live in a different foster home.  Even though I certainly didn't like where we were, I was used to it.  The devil you know is always better than the devil you don't know."

After three years of living full-time in their foster home and with their biological parents on the weekends a caseworker visited their foster home and asked Heather and Rex, in an effort to establish some permanency in their lives, what they thought about having a family of their own- one that they could live with all the time.  It seems like a given that every child would want- not just need - a permanent home with a mom and dad (or caregivers who fulfill those vital roles in their life).  That is why I was so saddened, yet not necessarily surprised given her history, when Heather didn't know what to think when approached with the concept of having a full-time mother and father.  She described the only parents she had known in life up to that point- her foster and biological parents- this way:

"We didn't call Dorothy or Wayne our parents and we didn't call Ralph and Claudia mom and dad.  They were just their first names to us, grown-ups who took care of us." So sad.

Nevertheless, Heather was up for a new adventure and she knew that it would be a relief for her brother Rex to escape their foster father's frequent spankings so she told the social worker that it would be fun to have a new family.

The lack of transitioning from Rex and Heather's foster home to their next foster adoptive home REALLY bothered me.  Once again the repeated theme of "Thank goodness for reform!"  popped into my head.  Rather than learning anything about the family who would become their next caregivers & eventual adoptive family and assessing if the placement was even a good fit for everyone involved, one day a social worker showed up at the foster home and told the children to gather their clothes and only three personal things (because there wasn't room for anything else).   They were instructed to put their belongings into brown paper grocery sacks (Cringe!) since they didn't have suitcases.  The bags were then loaded into the social worker's trunk and everything else in Rex's and Heather's possession was left behind as they drove away from all that was familiar to them.

Just as I was heartbroken to learn that Heather was unfamiliar with the concept of being loved by a permanent mom or dad, I was equally heartbroken to read about her interaction with her foster mother the night before she left her first foster home:

"The night before we left, Dorothy came to my side at bedtime.  She hugged and kissed me, telling me she loved me.  I was elated and I didn't want to ever leave because until that night, I had no idea she loved me. She had never hugged or kissed me or touched me beyond taking care of my physical needs."  That is truly tragic.

Foster parents- or any parents for that matter- are not just there to provide food and shelter and clothes for the children in their care.  Nurturing and guidance and emotional attunement are just as vital to a child's development and well-being as are regular meals and a safe place to sleep at night.

On the ride from Portland to Eugene, where Rex and Heather's new foster home was located, Rex asked the social worker a very pertinent question, "What are my new mom and dad like?".  The social worker admitted he didn't know.  Other interactions with the children made that particular social worker's job seem more befitting of a taxi driver providing transportation for the children rather than a child welfare worker whose job actually includes looking after their best interest.  Heather recorded,

"...the social worker dumped Ezra and me and our grocery sacks of clothes in the Spencer's house and he was gone.  We were utterly on our own with strangers I was supposed to call my family."

Can you imagine what a nerve-wracking/awkward/uncertain situation that would be for a grown man or woman to be thrown into- let alone a small child?  Again I thought, Where the heck is the transitioning in this situation?  Why had the children never even been given the chance to meet with these strangers beforehand who would become their family overnight?  Couldn't the children have at least been told something- anything- about the people and the home that was to become theirs for the rest of their formative years?  Thank goodness for reform!

I really wish I could tell you that Rex and Heather's new family was loving and welcoming and that they lived happily ever after- but the sad truth is that life with the Spencers made their previous foster home look pretty darn good, as Heather recounts:

"As the harsh realities of our adoptive life unfolded, I clung to my memories of our foster home and our real parents to give me comfort and courage.  All I had to do was survive the Spencers house until I could figure out how to get back to our old life, which I didn't realize until then, I missed terribly."