Okay, I admit it- I have totally Facebook stalked the parents of my foster children and/or the birthmother and birthfather of two of my children who I am not Facebook friends with.  (Please tell me I'm not the only foster parent out there who does this!)

However, I don't like the word "stalk"- that makes me sound so creepy and well . . . voyeuristic.   I much prefer words such as "investigate" and "research" over "stalk". 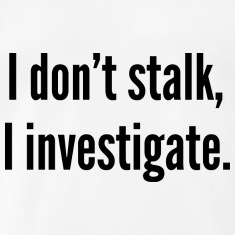 In all seriousness though, my "research" or "data collection" has had some major advantages.  Had I not facebook stalked the birthfather of two of our children I would never have had some truly priceless photos of him lovingly and playfully holding them in his arms when he was a part of their lives.  I also would not have had access to a couple of photos of my children's biological parents together- when they were together, that is. 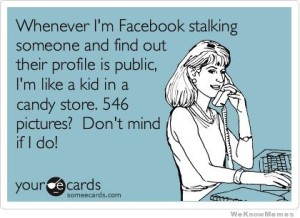 *I was able to reconnect with the adoptive mother of one of our former foster children (it was a kinship adoption).  Through that relationship I was able to pass on to Rose's new mother a bunch of baby pictures of Rose when she was in our care.

* I was happy to learn that the father of one of our former foster children is doing well in his work and that his little boy (who was just a somber baby when in our care) looks like a typical happy, healthy child who remains the apple of his father's eye.  I was further delighted to learn that this child's father was no longer a single parent because he got married (not to the mother of our former foster child who lost her parental rights to their child; that outcome would not have been a good one.)

*I was surprised to find that one of our former foster children's moms had a new baby.  I wasn't able to ascertain if she was still with our former foster child's father.  I was even more surprised to discover that her oldest child- our first foster placement who was just a pre-schooler when he was in our care- now has a facebook account of his own as he is heading into the teen years!  I laughed when I read "My mom finally let me have a facebook after begging her." and I thought it was sweet to see Justin post a photo of himself holding a baby in his arms with the caption: "My Baby Brother."

In general, I feel hopeful when I learn that the parents of our foster children have a steady job, are working hard in recovery, and appear to be doing well.

I also get really nervous for the parents of our foster children when they continually brag about explicit drug use, post an abundance of cleavage selfies or pictures of themselves in suggestive poses which would make the Kardashians look downright wholesome, or use a picture of themselves pointing a weapon at the camera for their latest profile picture- even if it is "just a joke".

Such instances make me wonder "Do you realize that your current or potential employers or law enforcement or ANYONE can see what you're choosing to make public on the internet?"

Recently I've been thinking about Jack and Jill's birthmom and how she is doing.  Actually, it's more accurate to say 'How can I not think about her?'  Sometimes my youngest children will look at me and in their faces I see a facial expression of their first mom stariing right back at me.  Although I send their bio mom pictures of "our" kids regularly and I have her number, I recently became a little concerned when she wasn't responding to my texts.  After doing some investigating on her facebook page I discovered that she was not in a good place, which meant, through the process of elimination, that neither was Jack and Jill's baby brother- if he's still in her care, that is.

I became worried when I read a particularly troubling status update by Jack and Jill's birthmom and then her posts stopped abruptly. Further investigating led me to discover that she is not just figuratively 'not in a good place' but quite literally not in a good place- as in jail.  Again.  This time on a totally different charge than her last booking.  It was evident from her mug shot that she's been using again.  So sad.

Time for another confession: I readily admit that on more than one occasion I have searched the public online County Jail Inmate Roster to collect info about the parents of my foster children.  I've done this both  before meeting them for the first time to know what to expect and even long after their case has been closed- to see how they're doing.

Sometimes I envy other adoptive families who have healthy, open relationships with their children's birth families because face-to-face contact and accessibility is not a problem or threat to their child's safety.

Then again, sometimes I'm honestly relieved that I have a valid excuse not to have to worry about navigating a face-to-face relationship with Jack and Jill's birthmom.  Don't misunderstand me- I fully recognize that it's because of her that Jack and Jill are in my life.  She carried them in her womb which is something I couldn't do for them.  But it's also because of her choices and the choices of their birthfather that they were removed from their care and placed into foster care to begin with.

It's not all black and white.  I experience all sorts of ambivalent emotions when I think of the role Jack and Jill's birthmother has played in my children's lives ranging anywhere from pity for her to resentment of some of the choices she's made and how those choices have affected or will affect my children's futures to admiration for the choice she made to finally put her children's needs above her own wants by relinquishing her parental rights.

In the end, what is best for my children takes precedence over what I personally think or want as an adoptive parent.   Because of that, I want to do all in my power to collect as much information as I can for them about their first parents (even if that means resorting to Facebook stalking) until it's an appropriate time for them to meet their first parents again in person, if that's what they desire.
Posted by Mary at 11:56 AM

We are just starting the foster care process but I would totatally facebook stalk! When we adopted our son, I stalked our birth mother and could tell when she was using or was in jail. It really does provide information you may need to know about the birth parents.

We are new foster parents, we are in our first placement on an extremely messy case. We've totally checked out the birth parents online. Some of what we've found has caused us to be extra cautious, not just for us but also our bio daughter's safety. The life of a foster parent I guess!

Yep. Absolutely do this. Not just Facebook "investigating" and searching the inmate list, but just random Googling. I do it regularly for the birth parents of the two I've adopted and less often for the ones who've gone home.