I had a pretty good Mother's Day this year for the most part but I found that any feelings of gratitude for the blessing of being a mother competed with feelings of sorrow and empathy and even guilt.

I felt bad for those women who sit with empty arms, such as a niece of mine who is eager to start a family but who has suffered not just one but two miscarriages this year.  I remembered back to the years of Mother's Days when I would sit- yet again- with no child to call my own.  I dreaded going to church on those days because I felt like a failure- I wasn't part of "The Club" and I just sort of wanted to become invisible so as not to call attention to what was lacking in my life.

On Mother's Day I was also mindful of other women who have lost children, including two of my sisters.  Although my sisters have other {living} children, I know how much their buried children continue to remain a part of their hearts even if they're technically not able to wrap their arms around them or if their departed children can't join their siblings and the rest of the family at the dinner table.

It seems inevitable that children will have to bury their parents someday but the thought of parents burying a child just stings and seems so unfair.

Then there's the feelings of GUILT I felt on Mother's Day.  This is the feeling I struggled with the most. I wanted to ignore these feelings- but I just couldn't.  As an adoptive mother I can't realistically claim that my children are "my own" and that they only belong to me because I share them with their first mothers. I was happy to learn that our oldest daughter's birth mother had a wonderful Mother's Day and that she was celebrated and surrounded by her children and family.

However, I was saddened to realize that while I get to have my youngest two children in my life and can legally be called their mother they have another mother who has lost her children.  And I use the term "lost" because her decision to relinquish her parental rights was under such different circumstances than our oldest daughter's birthmother who willingly relinquished her parental rights shortly after M. was born.

Especially disheartening is the fact that I recently discovered that Jack and Jill's birth mom would be spending Mother's Day in jail.  So this Mother's Day while I was showered with sloppy kisses and hugs from little arms around my neck and dinner my husband lovingly prepared which included chocolate cake for dessert far bigger than my head, I couldn't help but think of another mother sitting in a lonely jail cell left to think of all she has lost including her children- "our" children.  It was depressing to think about and really put a damper on any celebrations.

I know that this is a bit of a downer of a post, but I think it's needful to be aware of those mothers who experience loss of the dream of a child or their actual child- which loss is certainly likely to be magnified on Mother's Day.

I'm not suggesting that Mother's Day should be cancelled or anything at the risk of hurting anyone's feelings because Motherhood is SO worth celebrating!  However, we can be a bit more mindful of women and mothers who have experienced (and will continue to experience) loss. Obviously, because of the way my children came to be a part of my life my feelings gravitate towards birthmothers in general and specifically the birth mothers of my children. 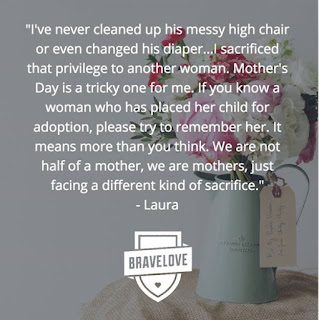 Wow! And thank you for being the vessel of wisdom for all the hurting moms out there.