Some adoptive parents may feel threatened or even invalidated when their children want to explore their biological roots.   Although I understand where that concern is coming from and recognize it as valid, I believe that adoptive families must respect the wants and needs of their adopted family members- even going so far as to advocate for them.  I personally believe that EVERYONE should have access to who they are and where they came from- yet for many that knowledge is almost impossible to come by- "almost" is the key word here.  DNA testing is one possible solution to tracing unknown roots.

I am more than aware that adoption is created from loss and that reunification with biological family does not always have a happy ending.  I can't speak for birthparents for the obvious reason that I've never been in their situation but I can speak from my experiences as an adoptive mother and as mentioned, I can advocate for my children's rights to know where they came from.

I am delighted to hear from the perspective of someone who has been adopted as they share their unique experience with DNA Testing.  Wayne Fagg is a former neighbor of mine and an adoptee who  will be guest posting about his incredible journey of discovering his birth family and unraveling his heritage through DNA testing.

Our family consisted of my Mom and Dad and seven children. On its face it was not that unusual a situation. However, I was the first of six children adopted by my parents, following the birth of their daughter 4 years earlier. I was born May 30, 1961 in Santa Monica Hospital. What follows is the brief story of how I uncovered my birth parents, all from spitting into a vial.

While I was in Utah visiting around the 4th of July 2015, we were fortunate to be invited to my brother John’s house in Heber City. As John and I were talking, he mentioned to me that he had taken the Ancestry.com DNA test a few weeks earlier. Apparently he had received it as a gift for Father’s Day. He told me it would reveal ethnicity—the idea had a certain appeal to it, although it has been fun over the years to claim everything from Greek to Italian to Spanish….

So, sometime in August I received the vial from Ancestry, spit some of my precious saliva in it and sent it off to be tested. Around 4 weeks later I received an email telling me my results were in. I logged into my account and it pulled up my DNA makeup:

So, there it was. I thought that that was it. However, things changed about 2 months later when someone asked me about the breakdown of my percentage of European ancestry and I went back to the site. There, for the first time, I saw a button marked “View All DNA Matches.” So, I clicked it. And, then I found information for which I was not prepared.

Ancestry gathers the DNA information of people who match and group them together in segments ranging from Close Family to Second Cousins to Third Cousins and so on. Pretty interesting. Most of the information is guarded by usernames and while some users have shared pedigrees, others have not uploaded that information. My eyes were drawn to that first line, where there was one name listed under the “Close Family” segment: olgakarcher.

I decided to do what anyone would do when given a name these days and wanted to have some information: I Googled it—then I searched Facebook. I ran the name Olga Karcher and came up with two hits. One was an older lady in San Diego and the other, a friendly face in Reno, Nevada. I sent a message via Facebook to them both explaining that they were my closest DNA match on Ancestry and I’d love to compare notes. Olga Karcher from San Diego was silent. Olga Karcher from Reno responded. She got back to me and said that she had her DNA results and didn’t see my name anywhere.

So, that was that. This was Thursday night. Somehow the results had been skewed.
Until I woke up Friday morning and she sent me a message entitled “OH MY GOSH!” And, this was her message:

Hi. This is Olga Karcher---THE previous Olga Karcher that you contacted on Facebook! I've been thinking and thinking about your situation, and the Ancestry DNA that just didn't match mine. AND THEN I SUDDENLY REMEMBERED---thank GOD!!---I had my husband Stephen Karcher do a DNA test last year and printed out the results and never looked back at his profile/neither did he. Honestly, totally forgot about it. YOU ARE HIS COUSIN!!!

So, he was born in Santa Monica in 1964. His Mom was Carol Anna Clayton Karcher and his dad, Robert Karcher. As she exchanged information with me, it became apparent that dates and places were lining up, but something was missing.  And, it was missing until Olga wrote me and said, “I think we are wrong. I think you are his half-brother.” His Mom had died in 2003 but his Dad was alive, so they wrote him an email on Friday night, November 6. He didn’t respond until late Sunday night.

Here is the text of that email:

11/08/2015
Dear Steve and Olga.
Carol and I first met in Santa Monica around May-June 1962 to the best of my recollection.  Around Thanksgiving 1962 we became engaged and began to talk seriously about getting married.
Carol told me at that time that she had given birth to an infant son previously whom she had given up for adoption.  As I recall the adoptive parents were Mormon and were either living in Utah or planning to move to Utah.
I think Carol always harbored feelings of guilt for giving up her infant son and wished  to have some contact with him.  The adoption agencies have provisions in place to make it extremely difficult for biological parents to locate/contact their child once it has been given up for adoption.
The basic facts seem to fit:  Born in Santa Monica in 1961 at SM Hospital.  Resident of Utah.  And I assume he has a birth certificate or some other documentation that identifies his birth mother by name.  Based on the available information, I think Wayne’s credentials as a family sibling are certifiable and you guys have an older half brother Steve. Congratulations….Gramps

Stunned. That’s what I was.  The only information I had been given by my Mom, Ellen Fagg, was that her cousin who had volunteered at the Santa Monica Hospital had known I was up for adoption placement and that the birth mother wanted a Mormon family.

Carol Anna Clayton was 22 when she gave birth to me.  Single and unwed, she had been raised by a single mother and wanted a different life for me. Her life after was a mixed bag. She gave birth to four sons, two whom are Greek Orthodox priests. They all converted to Greek Orthodoxy after their oldest son, Stephen and his wife, Olga did so in the early 1990’s.

She was tall, 5’10 and thin, with dark hair, some moles and a habit of puckering her lips together when she concentrated or read. She was born in 1938 in Santa Monica and graduated in 1955 from Santa Monica High School. She suffered from depression and was a functional alcoholic and also smoked a pack of Marlboros everyday. She died of breast cancer in 2003.

Her family, including her daughter in law, Olga, has been very nice and given me information and photos. They understand that I have awesome parents, great siblings and my own wonderful family and I am not looking for replacement parts. This is putting pieces of a puzzle together.

So, now the remaining question was, who is my birth father? The DNA results showed two names that could be my 2nd cousins and so I reached out to them and they offered vague responses without naming names of certain uncles and such, all of whom are older and have families. There was someone who might be able to give me a clue: Carol’s only sibling, a sister, Ruth, who was 5 years younger than Carol and who graduated from high school the year I was born. The problem was that Ruth was estranged from her family and had been removed since the early 1980’s. Emails and phone calls were placed and on Tuesday I was given a phone number, and on Tuesday night I called Ruth.

Ruth lives in a small town in Indiana. She explained how shocked she was to hear my voice. She told me some things about Carol. Apparently, because this was the early 60’s and unwed pregnancies were better not seen, Carol was sequestered in an old motel in Malibu that a friend of the family owned and there she waited out the term of her pregnancy. She shared some other information and then I asked if she at least knew the last name of my birth father. She said she knew his whole name that he had been a neighbor those for most of their childhood and was the same age as Carol. His name was George Duvardo.

So, armed with that I went back to my contacts on Ancestry and one of them responded that George was his uncle. Last night I spoke with his younger sister and leaned about him. Born George Carlson, his dad died before George was born in an accident and George was subsequently adopted by his Mom’s husband, Frank Duvardo. He was Catholic and she was Mormon. George had been ordained a priest, but that was the extent of his participation in the LDS Church. He had two children from his second marriage, a boy and a girl. An athlete in high school playing varsity basketball and football since his freshman year, he went on to play football as a wide receiver/tight end at University of California Santa Barbara. He was 6’4. George died in 1998 at the age of 60 from a heart attack.

So, there you go: Pieces to a puzzle. Information about health history. Ethnicity confirmed. But, at the end of the day, my name is Wayne Fagg, son of Floyd and Ellen and brother to Diane, Pam, Kathy, Robert, John and Mark. Like I told Olga, “I have great parents and siblings. I’m not looking for a replacement family.” What I do have is a greater extension to my family. For that I am grateful.

I encourage you to have your DNA tested. Be prepared for the results, both unexpected and unusual. 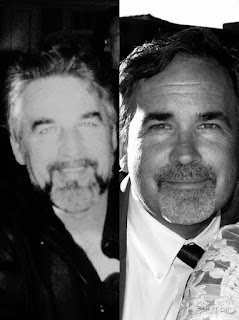 "They understand that I have awesome parents, great siblings and my own wonderful family and I am not looking for replacement parts. This is putting pieces of a puzzle together."

Those lines are my favorite part of Wayne's story.  Rather than negating or distorting his identity (or marginalizing his family) the discovery of his birth family has been a great gift which has enhanced his identity, given him valuable medical information, and expanded his sphere of family.
Posted by Mary at 3:27 AM

What an amazing story!!! I *hope* when my children are of age to seek out information, they also are just seeking to put pieces of the puzzle together and not a replacement family like you stated. Makes me want to hop over to ancestry.com right now and start our kids profiles and our family history.

I previously heard about the DNA profiling but never expected these types of results. Ancestry.com should make stories like yours into commercials. WOW!!