"Suffer the Children to come unto Me . . . Unless"

Some of the most heartbreaking experiences I have had as a foster parent are trying to comfort a newly placed foster child in my home as they cry out for their parents.  Nighttime is invariably the hardest time and intensifies the anxiety, confusion, grief, and trauma that these children experience as a result of being separated from their families through no fault of their own.

If the child is old enough to ask “Why can’t I be with my parents?” or “When do I get to see mommy?” I can usually offer up a sufficient explanation since most of the children get to see their family at least once a week at supervised visits.  If the child's parent is in prison or jail or doesn’t show up to their scheduled visits, then it makes it much harder for me to offer up an explanation or appease the child.  In the case of babies and toddlers who aren’t verbal but are obviously distressed, sometimes all I can do is hold them as they cry, try to provide comfort, and just be with them in their grief.

I’ve observed that a common justification of Trump’s new Zero Tolerance Policy which has separated over 2,000 children from their families at the border since May 1, 2018 has been “Parents in the U.S. break the law every day and they get sent to jail.  Their kids go to family or are placed in foster care!”

I have issues with this statement for a couple of reasons.  These are my concerns:

First, seeking asylum is not breaking the law, under 8 US 1158 Code.

In order to apply for asylum through the United States Citizen and Immigration Services, you have to cross into the U.S. and THEN present yourself to an authority and start the application process.  Under the new Zero Tolerance Policy* children are separated from their family as their parents await their asylum hearing.

Do some people cross our border and falsely apply for asylum even if they don’t meet the qualifications?  Certainly, but that’s precisely what immigration judges and hearings are for.

I value keeping the law and keeping our borders secure, but under this new policy, asylum protections no longer exist for individuals fleeing their country (namely women and children) from domestic abuse or rampant gang violence EVEN IF they come to the U.S, at a legal entry point .

Consider the words of a friend of a friend who does pro-bono asylum work as an attorney in Texas:  “There is not practically a legal route to come to immigration from many Central and South American countries.  The wait for unskilled persons from those countries is over 100 years long in some cases, so there is not, practically speaking, a way to immigrate legally.  Many of these immigrants being separated from their children are asylum seekers.  The legal process for seeking asylum in the US is that you show up here and then you apply, NOT application first and then immigration.  These immigrants are legal asylum seekers and they are being separated from their children while there asylum applications are processed, which can take years.  These people’s stories are devastatingly heartbreaking.  Rape.  Murder.  Gang and drug violence.  These people are risking everything to give their children a chance.” 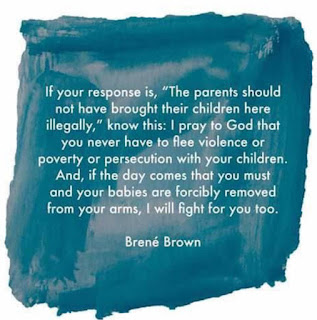 As a foster parent and graduate student of social work, I am much more familiar with U.S. Child Welfare Policy than U.S. Immigration Law.  I’ve seen firsthand that even when a child is in a safe and loving foster home it is still traumatic for them to be separated from their parents.  The abundant research shows that kids do better psychologically and physically in the least restrictive, most “home-like” environment rather than an institution (and preferably with kin, if possible).

As for incarcerated parents, at least they can be kept abreast of where their children are and how they are doing.  If their child is placed in foster care and not in the care of relatives, they have the resources of caseworkers or legal counsel to give them updates about their children.  Even if they can’t afford a lawyer they can consult with a public defender about their rights and have due process in court hearings.

Third, children being separated from their parents under ANY CIRCUMSTANCE is of concern!

Whether children are separated from their parents as a result of their parents fleeing the country and seeking asylum or illegally crossing the border or even being incarcerated or homeless, the children who are left behind deserve our compassion.  Period. 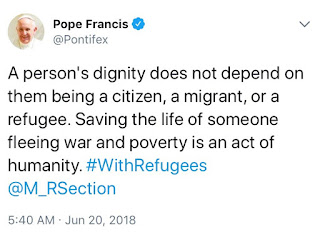 Just as no child has a choice as to if they’re born into poverty or wealth, children are not responsible for the choices their parents make.  Unless it’s not in the best interest of a child, families deserve to be together.   Foster care is set up to reunify families and give them another chance to be together.

As a foster parent it is not my job to make judgments about the parents of the children in my care (though it’s been a temptation I've succumbed to at times) but, rather, to love and care for these children as if they were my own until they can return to the care of their parents, if possible.

When we got a call about a prospective placement we don’t base our willingness to care for the child based on if the parents have a clean background- in fact, the majority of the children who are placed in our home have come into state custody precisely because their parents need some extra help and resources and they don’t have a clean criminal record (most often because of drug charges and domestic violence issues).

Fourth, when a child is separated from their parents they can suffer both short-term and long-term effects which can alter their brain chemistry and potentially their ability to form healthy attachments later in life.

I don't have the time here to recount attachment studies or go into the details of how the brain and limbic system respond to trauma, but many parents who have adopted or cared for children coming from "hard places"- environments of abuse and neglect or institutions and orphanages- deal with the very real repercussions sometimes on a daily basis, as do the teachers, social workers, therapists, or medical professionals who work closely with these children and their parents.

If anybody thinks that separating a child from their parents is "no big deal" because it happens all the time, I think you would feel much differently after doing everything in your power to try and comfort a crying child in the middle of the night when they've been removed from their family.

*U.S. IMMIGRATION POLICY BACKGROUND/CLARIFICATION- I am sharing these facts and sources courtesy of Michelle Martin who is a PhD and policy specialist from Cal State Fullerton:

-The policy to separate parents and children is new and was instituted on 4/6/2018.  It was the brainchild of John Kelly and Stephen Miller to serve as a deterrent for undocumented immigration, approved by Trump, and adopted by A.G. Sessions.  Prior administrations detained migrant families, but didn’t have a practice of forcibly separating parents from their children unless the adults were deemed unfit.  https://www.justice.gov/.../pres.../file/1049751/download...

- In 1996, President Clinton passed the Illegal Immigration Reform and Immigrant Responsibility Act, which made unauthorized entry into the US a crime (typically a misdemeanor for first-time offenders) but under both Republicans and Democrats, these cases were handled through civil deportation proceedings, NOT criminal proceeding, WHICH DID NOT REQUIRE SEPARATION.  And again, even in cases where detainment was required, FAMILIES WERE ALWAYS KEPT TOGETHER IN FAMILY RESIDENTIAL CENTERS UNLESS the parents were deemed unfit.
Posted by Mary at 9:17 AM