Earlier this year my husband and I had the humbling and sobering experience of meeting with an attorney to draw up the papers for our personal Family Trust.  As part of the process, we had to come up with “nominations” of family members we trusted enough to become guardians to our children in the case that we both died or became incapacitated while our children were still minors.

Part of the paperwork we had to fill out in our Trust included a document called a “Child Protection Plan” in which we also had to provide information for any possible future guardians of our children.  The name alone of the document, “Child Protection Plan”, sounded like some sort of form a child welfare worker would fill out, but rather than being filled out by a social worker, it was filled out by two parents concerned for the welfare of their children’s futures.  Some of the questions on the document we had to answer were:

“What values do you want instilled into your children?”

“What special holidays or observances would you like them to participate in?

“How would you like your children to be disciplined?”   (I had a whole list of books & theories for this question when, perhaps, the words “lovingly” and “just” would suffice.)

“What community or extracurricular activities would you like your children to be involved in?”

“What people do you want to be a part of your child’s life?”

It was a bit overwhelming to answer these questions because it really hit home what an enormous responsibility and commitment parenting is.  My husband and I found ourselves exploring topics such as “How are we doing raising our children?” and “What kind of legacy do we want to leave for our children after we’re gone?”

It was also very depressing to think about not being able to be there for our kids when they need us the most.  I automatically equated the way I was feeling to how an expectant parent or birth parent might feel when choosing to make an adoption plan for their child and trying to decide what kind of a family or person to entrust with the sacred responsibility of raising their child.  What an incredible sense of loss and a huge relinquishment of control!  I saw the following quote last year and it helped me to get a glimpse of what it might be like to be a birth parent: 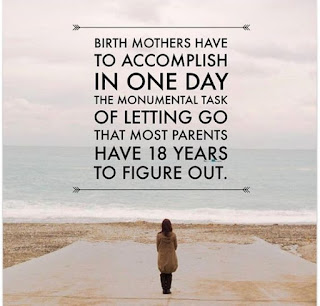 I also thought of what it would be like to be a parent whose children are taken into state custody: Who would I want my child placed with?  Do I even have a say in the matter?  Or, I imagined what it would be like to be an unwed mother in the “olden days” of unethical and unregulated adoption practices who had their child taken from them against their will (I’m knocking on wood that most of those horror stories were in the past and don’t currently exist).  In either case, I would be in a state of utmost panic for the sake of my child:  Would my child’s new caregivers be able to give them the care they need?  If they have children, will they treat my child as well as they treat their own children?

Whether you are a birth parent/first parent reading this who grieves for the child you brought into this world but whom you aren’t raising, or perhaps you had your children taken away from you and placed in foster care or have had to, by necessity, have family members step in and raise your children, and may be shouldering burdens of resentment, guilt, or grief . . .  I think there are some feelings any parent can relate to- namely, It’s tough- [whether you had a say in where your child ended up or if it was against your will and personal choice]- not to be able to raise your children the way you want- or perhaps, by whom you want.  It takes an extreme amount of trust that there are other people out there who have enough love in their hearts and room in their homes (and resources- because raising children isn’t cheap!) to commit to raising a child.

It is also a helpful reminder to those of us raising children who weren't ours to begin with to be mindful of their first families. 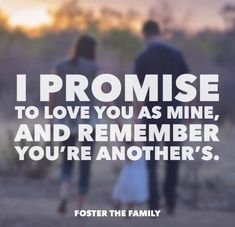