Over the weekend I attended the 2010 Families Supporting Adoption (FSA) National Conference.  It was inspiring and educational as always and it was nice to rub shoulders with so many friends of adoption.  I only wish that my husband could have been with me this year, but he was somewhere in the mountains with a bunch of scouts at Scout Camp!
Here's a few inspiring things/quotes I heard at the conference (and a little background on each as well):
I think the most inspiring presentations I attend are the panels where birthparents and adoptive couples share their personal stories.  At one such panel composed of birthparents (I loved that a birthfather was there to share his perspective!), birth grandparents, adoptive couples, adoptive grandparents, and caseworkers for both the birthparents and adoptive couples, a birthmother made the following comment about the family-specifically the adoptive mother- she placed her child with:

"I feel like we struck a deal in heaven"
Pass the Kleenex!  It is always affirming for me to hear from all sides of adoption- especially birthparents- that they knew their child was meant to be in the family they were placed in, which most definitely goes along with the theme of this year's conference- "Together By Divine Design"

Speaking of which . . . here's a comment a wise adoptive father made (who was sitting at my table for lunch on Saturday) in answer to a prospective adoptive couple's inquiry who were just getting started in the adoption process:
Q: How long is the average wait for an adoptive couple using LDS Family Services?
(Great Question!)
A:  I think it's just like the Theme of the Conference says: "By Divine Design".
(In other words . . . it depends/It's the Lord's Timing/each case varies).
Which can be hard to hear when you're waiting, but it's TRUE!
Adoption can be wonderful and full of joy- but that joy would not be possible without the profound losses and griefs of all involved: birthparents who lose a child or perhaps the dream of raising a child with a supportive spouse, adoptive couples who have to let go of the idea of having biological childen or who have already lost children to miscarriages or stilbirth or lost time and personal anguish from repeated unsuccessful fertility treatments, in general LOSS OF CONTROL over a very important aspect of your life which most people seem to have control over.  (And I'm not even touching on the loss that adopted children may feel throughout their life for their bio family- I'll save that topic for others who have experienced it firsthand)
Because there is so much loss involved before adoptions take place I think it was appropriate (and not surprising) that two of the presentations I attended touched on Elizabeth Kubler Ross's Stages of Grief, a model which was originally applied to people facing terminal illness, but which can certainly be applied to other losses as well.
I thought it was interesting that in both classes which mentioned grief  both  presenters [an adoptive woman in one case who shared her experiences with dealing with infertility and in the other case a birthmother who had placed a child for adoption years ago and is now a caseworker/counselor for birthparents] noted that the "Stages of Grief" are not necessarilly steps that a person goes through in linear order- like a checklist full of items to be easily crossed off- and then you're all done grieving, but rather, one can jump around to the different stages at different parts of your life, skip a stage, or be "stuck" in more than one phase at a time. 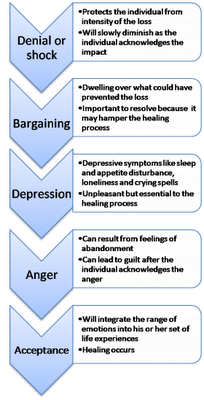 Perhaps this wasn't a groundbreaking discovery, but it was nice to hear others say that, because suffice it to say, I can relate.
I also thought the clip that Laurieanne Thorpe shared in her presentation- illustrating how some people just expect others to "GET OVER IT/STOP IT!") - was hilarious and on a more somber note, Anna Quindlen's definition of grief which she shared as "the continual presence of an absense" was so succinct.

Another touching comment which a birthmother shared [who was attending mrs. r's and alison lowe's class on adoption advocacy] regarding what she tells people when they ask her how she could have ever placed her child for adoption was "I didn't lose a son, I gained a family!"  What a beautiful perspective.
Speaking of grief and loss and regarding adoptive parents and birthparents I heard it said that "adoptive couples and birthparents have a lot in common in terms of experiencing loss and grief."
In a class which focused on understanding birthparent grief  I heard a lot of references to the author James Gritter who said in his book Lifegivers: Framing the Birthparent Experience in Open Adoption,

"Lifegivers and caregivers do not share or compete for the same roles; they have separate and distinct responsibilities to meet. With this fundamental understanding, birthparents and adoptive parents are not rivals; they are compatriots in the exciting task of shaping the life of a much loved child. A child counts on the steadiness of his everyday parents and savors the continuing interest of his lifegivers."

(Thanks for the complete quote, Tara!)


More about a few of the classes I attended at the Conference which addressed issues specific to adopting older children or special needs children (foster care) in a future post.
Posted by Mary at 9:37 PM