I HATE the term "Natural Parent"!

I once attended a Book Club where somehow, during the course of the night, we got onto the topic of "natural" births versus drug-assisted births.  I don't even remember if that particular topic related to the book we were discussing at the time or even what book we were discussing in the first place, but I do clearly remember the heated debate which followed and ended up dividing a roomful of neighbors and friends as a result of judgments and assumptions- both expressed and not expressed- based on everyone's differing experiences.   It wasn't a pretty situation.  In fact, the divisive atmosphere was a bit like this brilliant ad.

As if the contention in the room weren't enough to deal with that night at book club, there I was- the only infertile woman in the room (that I'm aware of)- sitting awkwardly in silence- not just because I felt such arguing seemed unnecessary- but because I couldn't offer up a valid opinion of my own on the subject even if I wanted to because I have ABSOLUTELY NO EXPERIENCE in such matters.  I kind of wanted to disappear from the room or somehow make myself invisible that night but I think I ended up laughing uncomfortably and just hoping the evening wouldn't end up in a fist-fight or a full-out brawl.

You see, some of us don't have a choice in the first place of whether to give birth naturally or with the assistance of an epidural or whether to deliver vaginally or by C-section because some of us never conceive or give birth at all.  Does that fact make me any less of a woman or less of a mother?  I don't think so and I'm pretty secure in my belief, but every once in a while I'll read something or hear someone say something which pricks a sensitive spot in my heart.

Earlier this week I was scrolling through an online forum of birth mothers, adoptive mothers, and adoptees and I came across something that really rubbed me the wrong way.  No- that's not entirely truthful.  To say it rubbed me the wrong way is minimizing how it made me feel.  It's much more accurate to say that I felt like I had been slapped in the face after I read it.  And it's not so much the term that was used but the intent and attitude which accompanied its use that left me feeling so invalidated.  What on earth could cause you to become so upset? you're wondering.  I'll tell you: a birthmother used the term "natural mother" to describe her relationship to the child she placed for adoption and with that child's adoptive mother.

Now I am well aware that there are differing opinions about what terms to use when describing certain aspects of adoption- and not everybody knows what is considered less offensive or most appropriate- which is why discussing and sharing positive adoption language and terms is so important.  However, even when one uses the generally preferred and agreed upon terms, say "Birthmother" for example- someone is bound to be offended.  I think the most important thing to keep in mind when talking about adoption (or anything for that matter) is "How might this term make another person feel- even if I don't intentionally mean for them to feel that way?  What are the underlying implications of the words I'm using?"

For example, before I became an adoptive mother I'm sure I probably used the term "put up for adoption" rather than "placed for adoption" to describe when a mother chooses to place rather than parent a child or to describe orphans who become available to be adopted by others.  Although "put up for adoption" is much better than "gave away" or "given up" (I'm cringing just writing that phase out!)  think of the implications a term like "give up" reflect for both a birthmother and an adoptee- or even an adoptive parent.

For a birthmother the phrase "give up" implies that she didn't put much thought or care into such a crucial decision- the child is just something to be discarded or that placing a child for adoption is as simple as giving away something that is not needed or wanted.  NOTHING COULD BE FURTHER FROM THE TRUTH! 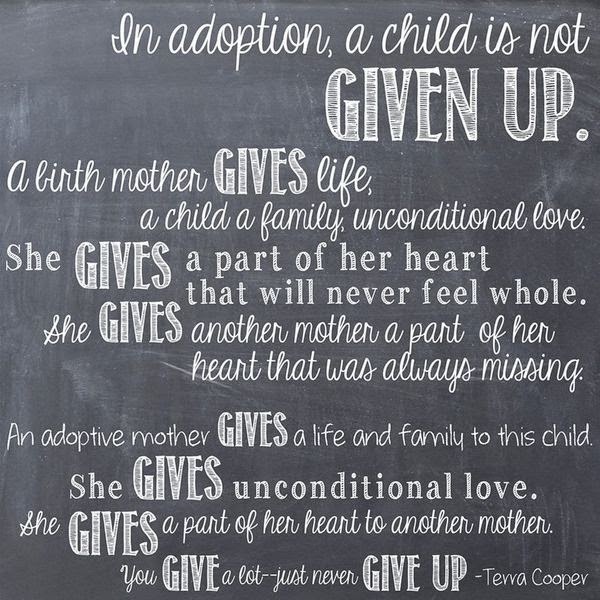 For someone who's been adopted, to hear the term "gave up" implies that they weren't wanted or loved in the first place- that they were "given away" or abandoned.  What a terrible thing to hear or believe!  I would hate for my daughter to overhear someone erroneously say that she was "given up" for adoption.  It is a huge insult to both her and her brave birthmother who gave her life and made us a family.

As for using the term "give up for adoption" in front of adoptive parents, other than my feelings I expressed in the previous paragraph, part of me wants to laugh because it makes it sound like the adoption process is no big deal- like there's no waiting or background checks or approval and no legal process involved- and of, course it's totally free- kids are just given away like free puppies or kittens.  Do you see what I mean?

So back to what I read which left me feeling so insulted: As an adoptive mother, when I read the term "natural mother" I automatically thought  "Hmmm- if she's a natural mother because she gave birth to her child, then as an adoptive mother I guess that makes me the opposite of natural- unnatural.  And unnatural equates with fake, phony- not real.  So I'm not a real mother because my children don't come from my womb?"  Can you see why the term "natural mother" might strike a sensitive chord in mothers who didn't bear their children? 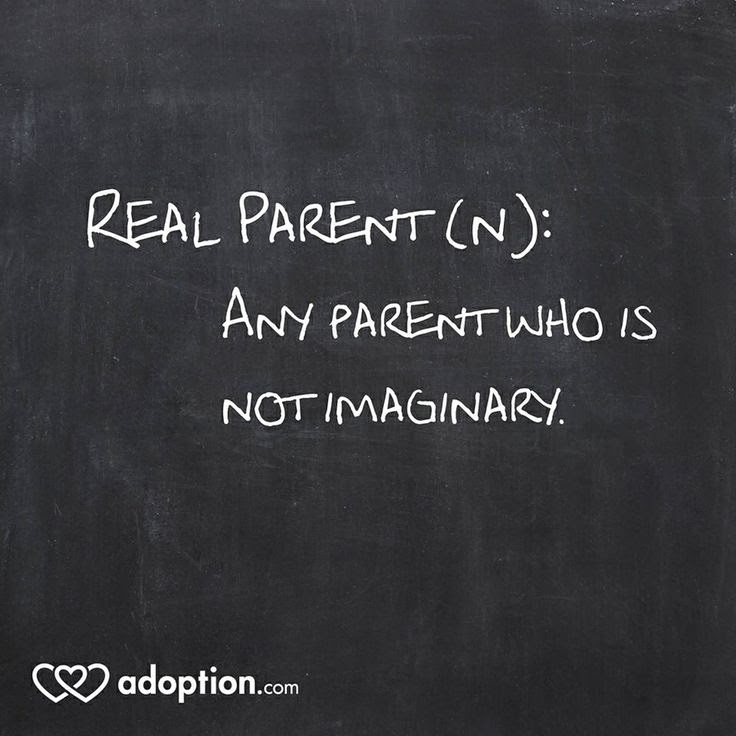 It wasn't just adoptive parents who took issue with the term "natural parent" but those who had been adopted as well.  One such woman responded:

I just have to put this out there... I hate the term "natural mom". It makes it sound like adoption is unnatural or that my dear mom, whom I love so much, is somehow unnatural in her role. I may have been adopted, but there is nothing unnatural about my mom or our relationship. Can we please stick to biological or birth mom? Thanks and sorry for the rant.

In her defense, the birthmother who started the online thread shared that her child's{adoptive} mom is just fine with her using the term "natural mother" and they have a great relationship with each other.   If it works for them, great.  As for my situation and the relationship I have with my daughter's birthmother, I would never want to risk saying or doing anything which diminishes the sacred role she plays in our lives.

Fortunately, I've witnessed something very beautiful in the adoption community and that is when members of the adoption triad become fiercely protective of one another.  So when I read the term "natural mother" in the online forum and I felt my anger rising I was very relieved and touched to find that the very first reply was from a birthmother who graciously expressed:

I promise I am NOT saying this to be rude or discredit anything you have said, because it is wonderful. But I know the term "natural mom" is kind of... invalidating. I am a birth mom, and I feel like calling myself "natural" mom would imply there is something unnatural about my son's mom. Is there a different term you could use? I think it is important, while we are in the subject of healing and being kind to birthmothers, to also be kind and loving toward adoptive mothers.

I happen to know the birthmother who replied with such sensitivity and I personally thanked her for her response.  Unfortunately, she took a lot of slack for expressing her view and had a lot of criticism thrust upon her, quite ironically, by others who have been through the same incredibly tough and sensitive situation she has gone through of placing a child for adoption.   (Even after she started her statement out with "I'm NOT saying this to be rude or discredit anything . . ." and after she repeatedly apologized to any who took issue from her words).

Needless to say, the thread on the online forum started to grow and just got uglier and uglier.  Much like my book club experience I described at the beginning of my post, there were many judgments, assumptions, and even some misunderstandings among the group's members which resulted in divisions and alienation rather than fostering an atmosphere of unity and support for each other and a safe exchange of ideas and perspectives without fear of sharing.

Although I was tempted to make a comment in the online forum I bit my tongue and decided to save it for now- in my own blog post.  So here's how I feel about the issue in one sentence:  I HATE the term "Natural Parent"!  There- I said it.  I got it off my chest.

Tell us how you really feel, Mary, Don't Hold Back. ;)

I guess what I'm trying to say is we're all imperfect, but let's all try to be a little more aware of what we say and consider how it might affect others.

"But it's someone's fault if they get offended."  some might rationalize.  That may be so, but it still doesn't make it right to say it.  Especially if the consensus is that a particular term is hurtful or offensive. 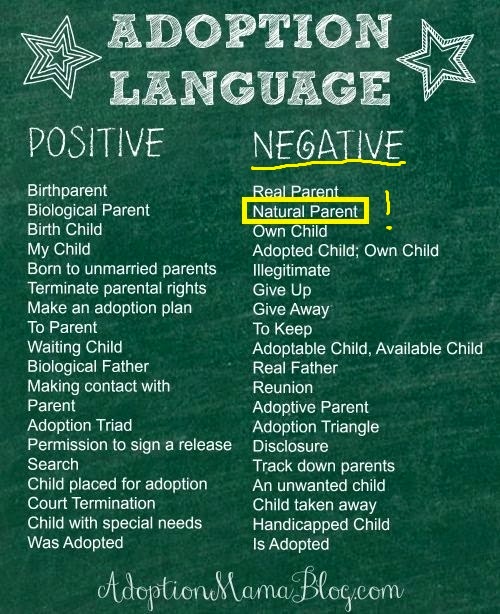 I will close with one of my all-time favorite adoption-related quotes from a wise birthmother, Desha Wood, who has beautifully expressed that what makes adoption so miraculous and unique and ultimately possible in the first place: 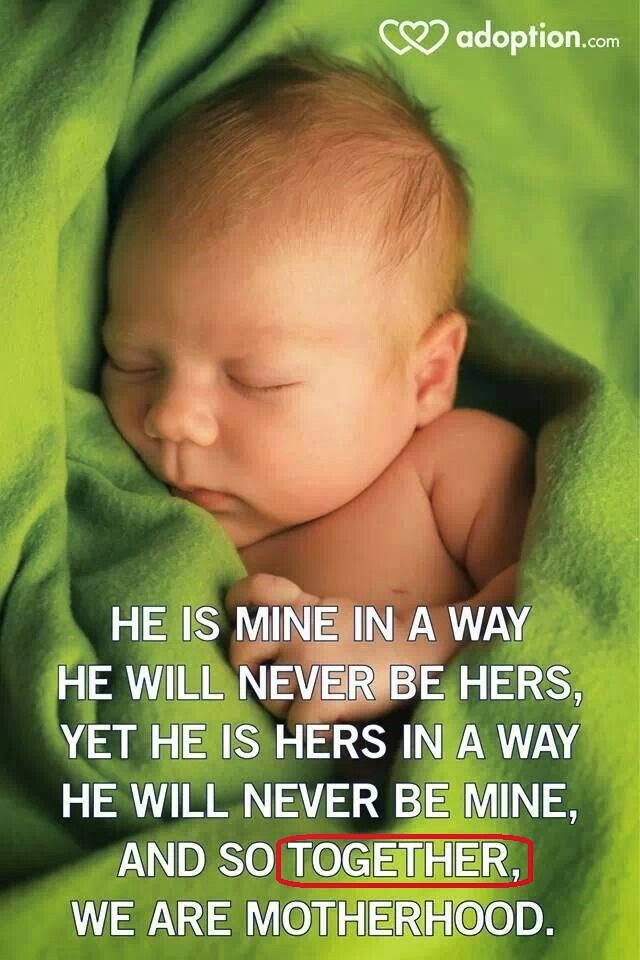