Judgments at the Grocery Store

I recently had a major surgery which required an extensive recovery period in which I was instructed not to lift (or push or pull) anything over ten pounds for six weeks afterwards.  This restriction was a bit challenging for me as a mother to a two year old and three year old whom are still dependent on me to lift them in and out of their car seats every time we go anywhere or in and out of shopping carts when we go shopping- not to mention that "Hold Me!" is a pretty common request from both of them as a form of affection.

You can imagine how happy I was when I was finally given the clear from my doctor to be able to lift again, as expressed in this Facebook Status:

"Today is the first day in 6 weeks that I've been permitted to lift (or push or pull) anything over 10 pounds.  I'm most excited about scooping up my 2 year old and 3 year old into my arms WHENEVER I WANT- especially (not so hypothetically speaking) if my 2 year old should start throwing a tantrum at her sister's soccer game or in the middle of a very crowded grocery store because she wants me to hold her and I find myself attracting numerous, menacing "Why-doesn't-that-mean-lazy-mother-just-pick-up-her-poor-crying-child?!" glares from various onlookers."

I'm sure most parents have had moments when they either feel like they are being judged or they have been judged because of the behavior of their children- especially if a child's outburst happens to be in a very public, observable place. 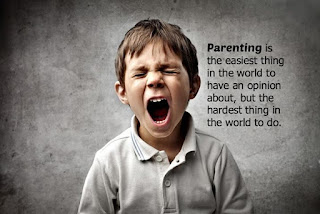 I can think of another instance in a grocery store three or four years ago when I was with two of my foster sons and I attracted the stares of others because of a meltdown the older boy (just pre-school aged) was having.  I wanted so badly to be able to hold up a sign explaining, "Don't judge this little boy! He has every right to be hurting inside!"  You see, he had just returned from a weekly scheduled supervised visit with his mother at the DCFS building and his behavior typically escalated after such visits.  With this particular visit, however, it wasn't the interaction with his mom that led to his acting out.  Quite the contrary, it was because his mother didn't show up at all.  Although I was initially a little embarrassed by the stares we received because of Ty's meltdown I also figured, "This little boy has earned the right to rage.  Let it all out, Ty."

A short time thereafter Ty was crushed again after another no-show visit- only this one happened to be on the day of his Third Birthday.  I remember really struggling with my anger when the caseworker informed me that his mom wouldn't be able to make it on today of all days because she was in jail.  "Couldn't she have just stayed sober for one day for this one visit of all visits?"  I thought.  Ty's caseworker was as equally disturbed as I was.

People seldom know the whole story and yet they are so quick to jump to conclusions and make judgments.  That is why I wanted to applaud one brave and compassionate woman after reading in her Facebook status about how she defended a fellow foster mother from judgments in the check-out line at Wal-mart.  Although this status is a couple of years old and I have never actually met the woman who wrote it (credit goes to Lindsay Woodward Crapo- like I said, I don't know her personally but it turns out we have at least one mutual friend) I saw it recently shared and I think it's very appropriate to share it now:

WARNING; Insensitive people at the Walmart rant ahead.
Last night I found myself sandwiched in line waiting to check out, this is not an odd occurrence. The woman in front of me had 5 children she was wrangling ( which did not seem odd to me) , as well as the fact that the children were a mix of Caucasian and Hispanic short people.( again hmph...didn't notice until it was pointed out to me).
Yes, I said pointed out.
The people behind me as I wrestled my own whiny toddler, began very loudly whispering things like:
"How many baby daddies do you think she has?"
"Can't even dress those kids for weather."
"Just wait until she whips out the food stamps. "
I calmed my 3 year old with old Altoids found at the bottom of my purse and looked incredulously back at the well dressed, normal couple spouting such, well, total CRAP.
I looked forward to see a woman fumbling with separating clothes items; coats and shoes socks and underwear from the food items with the black plastic separators.
There five kids- two that shared her same blonde hair with jackets and warm shoes and three, beautifully dark haired and deep brown eyes, sad, eyes; wearing shorts, and flip flops.
It was true she was struggling with a food stamp card. Didn't know what buttons to use to complete the transaction.
As the class act behind me deeply sighed; and said "There's our tax dollars neatly at work."
I shot them what I can only imagine was the death glare only a mother of 9 can execute to perfection.
I stepped forward and kindly said, "Can I help?"
These things are so confusing.
She looked at me.
I quietly asked " Foster or Adopted?"
I have 9 kiddos...two bio, I get it, please let me help."
She smiled, embarrassed, "New Foster Mom, this is my first time using one of these, they came 3 days days ago, gonna be with us for a while.
They gave us food, but the kids needed clothes , but no stipend has come through yet.
I looked at the kids and smiled, and turned to her and said; "Beautiful children I am glad you all have each other. "
I showed her how to use her card as the jackholes behind us snorted.
I explained to her how she doesn't have to separate items and that the items get separated by the computer at check out and how she pays the balance after she runs her card.
She handed each child a new coat , loaded up her cart as she left I side hugged her and told her "you have got this."
After they were out of ear shot...I turned with tears to the smug well dressed man and woman behind me.
"Those children? They lost the right to live with their parents just days ago, those clothes? probably the only clothes they own, or got to leave their home with.
THAT woman? Opened her home to kids, kids that needed a safe place to go, when the one they lived in no longer proved safe enough or secure enough for them. The food stamps, something health and welfare helps an already mother to two feed three new mouths.
There are not nearly enough women or people like her this world."
I whipped back around and started slamming my groceries on the belt, and then turned back around...
Voice shaking.;
"AND even IF those kids were all hers, and she had a dozen "baby daddies" and was on food stamps..no child in this country or any other deserves to be cold or hungry, I am sorry, but your behavior? Poorly done, VERY poorly done."
My new 'friends' left my checkout aisle and joined another, silently.
I grabbed a bag of damn Peanut butter m&ms....
As I finished checking out the girl checking me out smiled and winked, "Single mother on WIC, what you said? Rocked!"
I grimaced and said "thanks,I wasn't sure I should have gone off like that...hug those babies of yours tight tonight. "
She said " I will, you have a nice night mam' and do the same."
I cried hard as I found my Tahoe, buckled the baby in the car, loaded up...and opened those damn m&m's.
You foster mama's out there...hold your heads high, you are the hands and hearts that are the strong and the steady for small ones when they need it most.
Hats off and so much love today to you.♡♥♡
Posted by Mary at 7:40 PM

This is a great post. Thanks for sharing the Walmart story too. As a new foster mom who also had toddlers (who sometimes exercise their right to be angry and upset in public), the whole post was exactly what I needed to read.