My state has certainly had a busy month making headlines with controversial legal battles in regards to adoption.

Last week the focus in the media was a particular case about birth father's rights.  Here's a brief synopsis:

After much publicity on social media many have spoken out in favor of the birth father retaining/obtaining his parental rights.  One adoptive mother friend declared her feelings on the matter, expressing "I would NEVER agree to adopt a baby unless both birth parents consented."
My instinctive reply was "Absolutely."

Perhaps what was just as disturbing to me as the fact that this particular case seemed unethical were some of the critical comments and judgments heaped upon the baby's birth mother and her family, namely:

1)  Allegations or suggestions that the birth mother was "coerced" or forced by her parents into placing her child for adoption- another HUGE ethical issue.

2) The assumption/inference from others that because the birth mother chose to relinquish her parental rights and place her child for adoption she didn't care about her child.

As you can guess, any assumptions which equate adoption with abandonment or lack of love don't go over well with me.  Needless to say, some of my Mama Bear buttons were definitely pushed as I read a particularly scathing response to the case by one of my Facebook acquaintances.  Anyone who knows me well knows that I don't like contention, but I HAD to speak up.  This was my response: 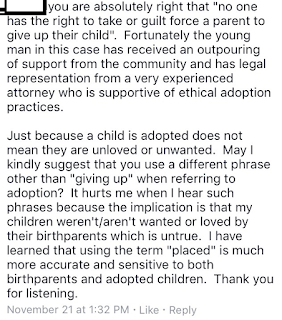 As I mentioned earlier, I was one of the first to side with the birth father in this particular case.  But as I took a step back and looked at the issue of birthfather's rights from a general point of view (and not just under the framework of this specific case) I asked myself, "Would I NEVER really agree to adopt a child unless both parents consented?" (And I use the world "child" rather than baby because babies are not the only ones who are in need of adoptive homes).  After further consideration my answer was "no."

[In case any anti-adoption and/or family-preservation-no-matter-what! advocates want to send me hate mail accusing me of "stealing" someone else's children- Let me inform you that our oldest child's birthfather was not interested in sticking around to support his baby or her birthmother and although our youngest children's birthfather initially expressed the desire to relinquish his parental rights he never attended the follow-up court hearings regarding the permanency of his children and thus his parental rights were eventually terminated.]

So, what if, hypothetically speaking, my state had a law in which a birthmother could not place a child for adoption unless she had the consent of the birthfather?  One's first instinct might be to think "That seems fair enough!" but consider the following scenarios:

-A woman is raped.  She wants to place her her child for adoption but she can't because she cannot legally do so without consent of the birth father.
- A pregnant woman is unsure of who the father of her child is but she wants to place her child for adoption.
-A woman knows who the father of her child is but he is abusive and a danger to the woman and potentially to the (born or unborn) child.
-The birthfather cannot be located.
-The birthfather can be located but he is in another state, country, or in prison.
-A birthfather has no intent of supporting the birthmother or their child.

Each potential adoptive situation is different and I realize that none of the above scenarios apply to Colby Nielsen's case.  However, it is important for all of us to keep in mind the reasoning behind Utah's adoption laws as stated by an attorney in the news article I referenced at the beginning of this post:

“This law, meant to protect mothers and babies with an absentee father, is an absolute travesty and disgrace in a situation like this,” said local attorney Erin Byington, who presented the Nielsens before Hutchins took the case. “If a father does not file a paternity action, specifically stating certain things by affidavit, prior to the mother signing her relinquishment for adoption (not court action, just a signature,) the father loses all ability to fight the adoption and seek custody. It doesn’t even matter if he’s on the birth certificate, or even if he physically has the baby in his care. This cannot possibly be the intended result of this legislation.”