This morning I came across a disturbing headline in my news feed, which read:

Neglected boy shut in room with heater on dies of hyperthermia

I glanced down at the accompanying faces of the defeated young parents of this child shown in their mug shots.  As I read on I was not surprised to learn that the parents were not only using meth, but they were manufacturing the deadly substance in their home as well.

Meth is an evil drug- nobody will ever be able to tell me otherwise.

Although the account of the toddler's death was tragic enough in itself I was also quite disturbed by some of the online comments made in response to the story.  One commenter, in particular, garnered a lot of attention and made the argument that because the mother of this young child who died due to parental negligence is pregnant with a second child "that kid will be born with parents in jail, spend a childhood in foster homes until that kid becomes a criminal himself.  Just like mommy and daddy."

Wow.  It wasn't just the general insensitivity of that comment which filled me with disgust and sorrow, but as a foster and adoptive mother (and without the need to share further private details) some of the circumstances described by that rant- and the utter lack of sympathy expressed for all involved, including the birthparents- hit a little too close to home for me and stirred up some very tender feelings within me.

Needless to say, that particular comment was followed up by a barrage of replies and rebuttals but the one which stood out the most to me was from a woman who shared her story of being a "botched" abortion- and being born addicted to heroin- yet, despite being born under the most tragic of circumstances (and almost not being born at all!), she had been raised by a loving adoptive family, gone on to graduate from college, and has since been a force for good working in the healthcare field. This woman ended her commentary with these inspiring words:

"A child becomes whatever you tell tell it to become.  Teach them Christ's love, shower them with love and give them confidence to love themselves and they can become whatever they dream."

I mentally applauded this woman and her empowering attitude and couldn't agree with her more.

Ironically, just moments after reading the horrendous news story of a young child dying under tragic circumstances, I came across a quote speaking of a child born to an unwed mother and a devoted foster father in an impoverished and truly humble environment.  Surely this family and their child endured their fair share of stares, speculation, and unwelcome comments from others.

It is my hope that the message I read and which I am sharing now can serve as a reminder of hope to anyone who has come from a less-than-perfect background or who has ever found themselves feeling outcast from society: 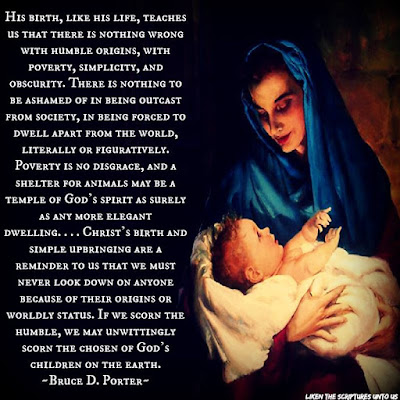