It's occurred to me that the last four posts I've written all share a common theme: judging and judgments- either through the formal legal process in an actual court of law or on a much more general level of making judgments and assumptions about others (or perceiving judgments from others which is also a form of judging).

As I wrote in this post: "People seldom know the whole story and yet they are so quick to judge and jump to conclusions and make judgments."  It's  impossible to make a fair judgement when we don't have all the facts.

With that background, I'd like to invite any readers to consider the following scenario and pay attention to any judgments or assumptions that might arise within you:

A tired looking woman walks up to the receptionist area of the radiology department of her local hospital with a toddler balanced on one hip and a diaper bag hanging over the opposite shoulder. The woman reaches into the diaper bag and pulls out a piece of paper nestled among other papers. She seems to nervously hold her breath as she hands it to the employee behind the desk.


Although the receptionist initially greets this woman and small child with a welcoming smile, as soon as she reads the order for "full body x-rays needed" accompanied by a handwritten note from the referring physician with instructions to call back and report the results immediately to the Children's Justice Center, her countenance and body language suddenly transform- whereas her lips were drawn up into a pleasant smile just moments earlier they are now fixed tightly into a straight line.

Perhaps the most revealing clue into what the receptionist is thinking about the woman on the other side of her desk and this situation is what can be found in her eyes, or rather, what can't be found as she can barely make eye contact with the woman who brought this child in.  Consequently, the woman holding the child appears even more nervous and seems eager to offer up an explanation.


What were your assumptions about this situation?  Was it that this woman had injured her own child? After all, she appeared to be tired and a bit under stress.  And what logical reason could there be for an order of "full body x-rays" to be taken other than to assess for extensive injuries?  One or even two broken bones in children could easily happen as a result of an accident- but multiple broken bones seems awfully suspect.

Maybe you gave the woman the benefit of the doubt and thought that perhaps her boyfriend or husband or daycare provider injured this child?  Would it change your opinion on the matter if the woman had been poorly dressed and unkempt versus neat in her appearance or above average in her socioeconomic status?  Would it have affected your judgments about the situation or the people involved if I had mentioned that the child was a different color than the woman who brought her in or would that have even mattered?   Would you have thought less of the woman if she had used Medicaid as a form of insurance versus private insurance?

The woman in this particular situation was me- three years ago.  The child I was holding was my foster child and I was particularly worried about her since this was not the first time she had come into our care.  Just a few days earlier I got the call informing me that Rose's mother was not in a good place and because of that she had left her toddler in the care of some friends.

As for my tired-looking appearance that day at the hospital, I think that could be attributed to the transition of an overnight addition to our family, various meetings and consultations with caseworkers and DCFS staff- both in our home and over the phone- and taking an active toddler to 3 medical appointments where she is instructed to "hold still" for examinations- all within a 48 hour time span.

As mentioned, at this point Rose had only been in our home the second time for a couple of days when her pediatrician expressed some concerns after I took her in for an initial doctor's appointment which led to further assessments at the Children's Justice Center which, in turn, led us to the hospital for x-rays as a precautionary measure.

The reason I share this story is because it was a time when I can vividly recall not only feeling judged but pretty much hated and despised.  I think the reasons for any judgments made that day were due largely because not everybody had access to the facts right away. 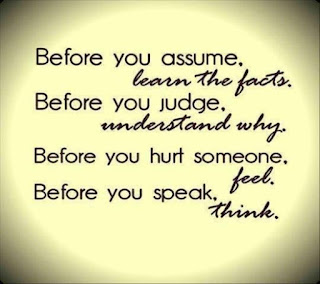 Back to my experience:  If you've never had the opportunity to take a small child to the hospital for full-body x-rays consider yourself lucky.  I probably appeared to be nervous that day because I was nervous for Rose's sake.  Unfortunately, nervousness can easily be mistaken or associated with guilt, so when I handed the script from the referring physician to the receptionist behind the desk and she looked over the orders I could sense immediate judgment from her towards me.  Maybe I was just reading into things but the receptionist's sudden and obvious lack of eye contact with me either led me to believe she suffered from poor social skills (which is highly unlikely for a receptionist) or that she surmised I was the one responsible for any possible injuries to this child.  After all, what reason would any doctor have for ordering full body x-rays on a small child not just to determine if the child had any recent broken bones but if she had suffered from any broken bones or fractures in the past?

When we sorted through Rose's insurance info and contact information I had the chance to explain to the receptionist that I was Rose's foster mother.  I'm not actually sure if mentioning that bit of information helped the receptionist's view of me or just disgusted her further.

A short time later I was called back into the x-ray room with Rose.  As we were getting settled in the room I could hear a couple of technicians consulting with each other behind a curtain: "Full body x-rays?"  She's just a toddler- this will be tricky."

Suddenly a somewhat peeved sounding voice adamantly piped up in what was probably intended to be a hushed whisper saying something to the effect of, "Should she even be allowed to be here with her?!"  Followed by more whispering and then, "Oh- that's the foster mom- we'll have her stay to help hold her down."

An x-ray technician with a look of relief stepped out behind the curtain and courteously extended her hand out to me as she introduced herself and gave me some instructions.  The tension I could sense from behind the curtain just seconds earlier- as well as any assumptions and judgments made about me- immediately dissolved.

We all judge whether we want to admit it or not.  I've mentioned many times before that one of the biggest struggles I've had to work on as a foster parent is not judging the birth families of our foster children.   Yes, they've made mistakes, but everyone needs a little more love and support and a little less judgment and criticism.
Posted by Mary at 11:34 AM

I knew the woman in your description was the foster mom because I have been you. At the hospital with drs orders for testing that even talking about makes people uncomfortable. That coupled with Medicaid and the fact that my foster children happened to have the same rather common last name as me made it even worse. I explained myself only because I was too exhausted to deal with anything else on an emotional level at that point and I needed that drama diffused right then.