I recently attended the last half of a required training for foster adoptive parents called "PATH" which is an acronym for "Parents As Tender Healers".  This training was essentially 40 hours of training condensed into 8 hours and the purpose was to lower the amount of disrupted placements in foster adoptive homes.

Preventing or decreasing disrupted placements is KIND OF A BIG DEAL, so that being said, if I could choose just one part of that training to pass on to other foster and adoptive families, it would be a few pages of the 200 plus page booklet which listed behaviors which children coming from a background of trauma might exhibit AND- this is the most crucial part: the underlying emotional issues behind those behaviors.

Although the connection between behaviors and underlying trauma isn't necessarily new to me, I was drawn to a table in the training booklet which outlined common survival behaviors with corresponding underlying emotional issues.  I guess I prefer for things to be presented as simply and orderly as possible which is why I appreciated the table.

Speaking of the connection between brain development, underlying trauma, behavioral issues, and discipline/parenting strategies, there are a couple of common denominators which I've read or learned about in the work of such professionals as Karyn Purvis, Dan Siegel, John and Julia Gottman, Bruce Perry, and Heather Forbes:

1)  A child's behavior is a symptom of an underlying cause.

As a parent, teacher, or caregiver, this can be hard to keep in mind ALL the time because (at least for me) I feel like my first objective when a child "misbehaves" is to "fix" the behavior of the child.

For example, if I find myself bothered because a child is continually talking back/lying/being aggressive towards others my first instinct is often to say, "Hey- that's not acceptable.  We don't do that in our house!"  After all, isn't one of the objectives of parenting to raise well-adjusted, upstanding citizens who can become contributing members of society (or, in the least, function in society without a criminal record)?

The second thing I've learned from the professionals I listed above is that:

Anybody who has studied attachment and trauma knows that individuals who go through a traumatic event will experience changes in their brain development and wiring.  These brain scans are one stark example: 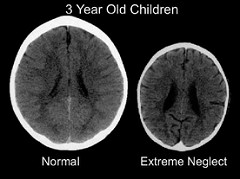 So when we take these two truths together:

1) A child's behavior is a symptom of an underlying cause

How can we apply it to the way we parent, discipline, or teach the children entrusted to our care?

I'm still learning, but the most important thing for me to remember is this:

Behind someone's behavior is a underlying issue or to put it another way- a SURVIVAL MECHANISM- so deeply wired into their brain that "logic" or "manners" or any action which first requires higher thinking and reasoning skills is placed on the back burner (if accessing such higher functions in the brain is possible, that is) so that survival can take over.  It is our job as caregivers to "decode" the need behind a child's behavior.

If you have 10-12 minutes watch THIS clip.  Yes, it's outdated and the musical interludes are cheesy, but it is specifically aimed towards training resource parents and it makes the point that behind every behavior is a need.

I was going to photograph and display on this post the pages from my PATH booklet of the table entitled, "Underlying Emotional Issues of Survival Behaviors", but the results were not the best picture quality so I will transcribe them here.  (Plus, I re-wrote them in alphabetical order for easier referencing 'cause I'm nerdy like that)!

I like to consider the following list a "Cliff's Notes Version/Reference Manual" for Foster Parents.  As you will see, some of these behaviors have a more obvious cause than others.

Aggressiveness ---> Fear of becoming attached.  "I'll hurt you before you can hurt me."  "I can control the situation or influence outcomes by being aggressive."  Aggressiveness may also reflect the lack of previous parental limits on this type of behavior.

Anger/Depression---> A response to an overwhelming trauma and loss.  Underlying tension that cannot be identified or described in words: "I am angry over what has happened to me.  I'm afraid to get close to you.  You may hurt me, too.  I won't relate to you, and that way I won't have to care about you."

Difficulty at School ---> May indicate learning impairments.  If the child is significantly behind in school, he or she might act out behaviorally as a way to distract parents and teachers from poor academic performance.  Children who have had many placements may have more difficulty adjusting to a new school setting where expectations are different.  Children who don't sleep well may experience irritability and inattentiveness at school.  Children who have difficulty with peers often experience behavioral problems in school as a result of not knowing how to problem-solve.

Drug and/or Alcohol Abuse --->  An attempt to numb painful memories and thoughts.  They may have had direct contact with drugs and/or alcohol in their birth homes.  Some experimentation with alcohol or drugs is typical, especially in adolescence.  Children may think it is a way to escape problems.

Enuresis (wetting, bed wetting) and Encopresis (bowel control problems, soiling)---> Fear of abuse (may have been molested at night).  Protection: "If I am smelly, you won't get too close"
Bed-wetting can be a symptom of physical or sexual abuse.  It can also be a reaction to separation from birth parents.  These behaviors may also be a result of inappropriate toilet training or medical problems.  Generally physical/medical causes should be considered first and ruled out before considering/concluding child abuse.

Foul Language ---> Fear of appearing weak (and therefore a target).  Children may have heard adults or others in their birth homes using foul language; they understand that cursing is a good way to appear strong and tough or to get the attention of an adult even if it is negative attention.

Hoarding ---> Fear of being out of control.  Fear of not having enough food or necessities: "I never was able to count on having enough food, security, or other resources.  I think of the world as scarce, and I need to make sure my needs will be met."

Impulsivity ---> A feature of trauma reaction.  The child has learned that things are always unpredictable; may not have learned restraint or respect for boundaries.

Lying and Stealing ---> Conflict in values.  "What I learned through my birth family and through the system is very different from your family.  If I tell the truth, I may be hurt.  I've got to take what I need in order to care for myself."

Needy/Clingy ---> A feature of trauma reaction.  The child is very anxious and needs to involve adults as a way of knowing what's going on or a way to feel safe.  Clinginess may also be a symptom of low self-esteem; it's difficult for the child to find out what he or she is good at and how to pursue those activities.

Over Active ---> A feature of trauma reaction.  The child has learned that staying busy distracts you from your frightening thoughts.  Sleepiness can cause children to exhibit excess energy.

Over-competency --->  Need for control: "I don't trust that you can take care of me (or my siblings) so I'll have to do it myself."

Running Away ---> Fear of abuse or becoming attached to someone other than their birth family for fear of being disloyal or fear of being vulnerable: "I'll leave you before you can reject me."  Some children find it easier to avoid (or "run away" from) stressful or difficult situations than to try to work through them.  Other children simply want to return to their birth home and they may think that by running they will be more quickly reunited with family.  Running away may be an attention-seeking behavior or a way to hurt the foster adoptive parent.

Self-injurious behavior ---> Low self-esteem, lack of coping skills, depression, or suicidal feelings.  May include scratching, kicking, biting, or cutting oneself: 'I feel somehow responsible and ashamed of what has happened to me."  This behavior gives children a sense of relief: "I can control when I get hurt."

Separation Anxiety ---> Emotional or developmental delays.  "You will leave me- just like everyone else has."

Sexualized Behavior---> Sexual abuse victim or witness.  "This is the only way I know to get close."

Testing and Control Battles/Temper Tantrums ----> Most adults are unpredictable, and may over- or under-react to a situation, which leads to the child's attempt to control situations: "I feel like my life is out of control, so, I'll try to control you and everything else!"  Some children have never had consistent expectations placed on them.  As a result, they have learned to fend for themselves. Temper tantrums can be a sign that a child is tired, hungry, angry, or frustrated.  Children may throw tantrums as a means to get attention, to get their own way, to hurt others if they feel hurt, or to get others to leave them alone.

Trouble Sleeping at Night --->  Fear of being in a new place.  Memories/nightmares of abuse.  Missing the birth family.  The inability to sleep is related to depressive disorders.  Difficulty sleeping at night may also indicate medication side effects, a fear of trauma reaction.

Withdrawal from Relationships ---> Fear of becoming attached or hurt: "I won't relate to you, and that way I won't have to care about you."

This is the reference for the above list,  taken from pages 59-61 of this book: 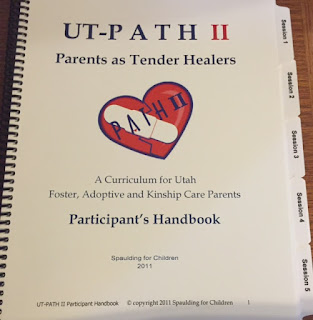 Incidentally, I came across two quotes within a day after attending my PATH Training and I feel it's appropriate to share them here:

A friend of mine, who happens to be a foster parent as well as a pre-school teacher (lots of patience required for both roles!) shared this one on Facebook: 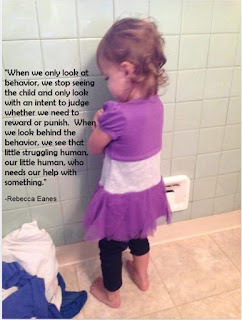 This next quote comes from an AdoptUSKids Publication, "Understanding Trauma":

The phrase "bad kid" also reminded me of another quote which is applicable to any parent but especially pertinent to parents with children who have special needs and/or foster adoptive families who may have children coming into their homes who literally cannot master impulse control (or have to work twice as hard as the general population does in certain areas of development) because their brain wiring has been affected by neglect, Shaken Baby Syndrome, drug exposure, or the tragic consequences of Fetal Alcohol Spectrum Disorder.

What is particularly hard for such parents is if their child looks "normal" on the outside (because not everyone who suffers from FASD will exhibit all of the obvious facial features, for example) and the impulsive behavior or lack of attention in their child gets equated with "poor parenting" or the child gets unjustly labeled as a "bad" kid. 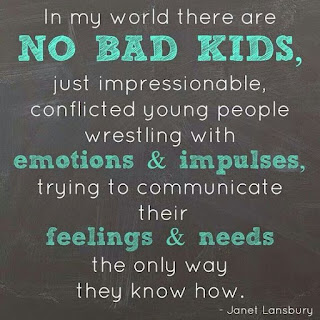