Over the past year or so I’ve considered myself lucky if I’m able to write even one post a month on this blog.  Since there’s a few weeks remaining of November, here is my somewhat obligatory post during National Adoption Month.

Adoption has undoubtedly been a huge blessing in my life, but it’s not always necessarily a sunny subject.  I think the complexity lies within the fact that I am the beneficiary of somebody else’s grief and loss.

I came across this quote this year and I was impressed with how many big and complicated feelings of mine it so accurately and succinctly addressed in just one sentence: 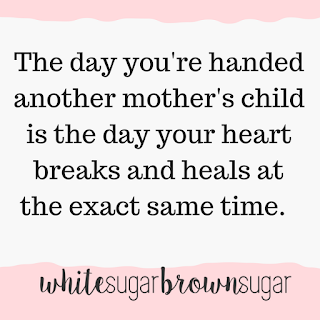 Mother’s Day is a bittersweet day for me for that exact reason- I am vividly reminded that I am not the only mother my children have and I feel a bit of guilt as well as awe that I am the mother who gets to raise them.  Mother’s Day also brings up pangs of sorrow and memories of the years of alienation of being a childless woman.  Seven years actually goes by fairly quickly in retrospect, but when you’re in the middle of it, waiting seems like forever.

When I take myself and my feelings out of the equation and consider my children and their feelings about being adopted and any issues they will deal with concerning their identity and history, I can’t help but acknowledge that as loving and stable as our home is, my children lost their first families and are the only ones in the adoption triad who had absolutely no choice in the matter of being placed with our family.   I can only wonder if this will bring up anger, sorrow, or resentment for them in the future.

My pre-school aged daughter (our youngest child) has been bringing up her birth mother quite a bit this year.  Incidentally, I remember the pre-school years as being a very pivotal time for our oldest daughter to bring up questions about babies in tummies in general and specifically about her adoption and her birth mother.  I know of an LCSW who has counseled a lot of children currently in foster care or adopted from foster care and she has observed that other common ages for children to bring up questions or have issues with their first families and their identities is 9 years old and 14 years old- I thought that was interesting.

My oldest daughter expressed sadness and disappointment to me when she was a preschooler, about not being able to come from my tummy.  Fast forward six years and I had a deja vu moment when my youngest daughter was playing with her dolls (or doing some activity that made her think of babies) and she commented to me something to the effect of, “Remember when I was in your tummy?”  I had to gently remind her that she never came from my tummy.  It was so interesting for me to see two totally different reactions to the same information.  Our youngest daughter immediately became angry rather than sorrowful, as our oldest daughter did.

This year my youngest daughter seems to be trying to reconstruct her story- and not always with accuracy. I listened to her one night recount a short narrative: “My ‘other’ mom was really nice and would always feed me bottles in this house when she used to live here.”  I had to bite my tongue and was thinking to myself, “The caseworker would have to prod your ‘other’ mother to pick up her newborn baby during her supervised visits!”  Of course, I didn't say that out loud, but kept my thoughts to myself.   Then I reminded my little girl that her “other” mother never lived in our house and that I picked her up from the hospital and brought her home a couple of days after she was born.
It’s hard to give specific answers to the question of “why?” when my kids ask about why they don’t live with their first families.  Each situation has different backgrounds but we always make it a point to let our kids know that even though they are not with their birth mothers, they are loved by them very much.  I want them to know, more than anything, that their adoptions are in no way equated with abandonment or rejection, but rather, born of great love.

It’s a little more awkward trying to explain things to my youngest two who are birth siblings.  I try to be as age-appropriate as possible and use the word “sick” (as in having an illness) to describe why their first mother wasn’t able to care for them rather than using the word “addiction”.  As they get older I can give more details as appropriate.

My little boy, now in kindergarten, hasn’t seemed to bring up adoption as much as his sisters do.  I don’t know whether that’s because he doesn’t think about it as much or just because he doesn’t verbalize it.  I did have an experience with him recently where I was cuddling with him- at his request- and I couldn’t help but think that we were making up for lost time bonding with each other since, unlike his sisters,  I missed out on the first year of his life.  I honestly don't know the extent to what he went through in his early life. "I wish I could have been there for him from the very beginning." I thought to myself.  Although it was a tender moment it also brought up some disappointment and a little bit of anger inside of me.  Such is adoption- beautiful and miraculous while heartbreaking at the same time.
Posted by Mary at 9:21 PM