Grief and The Good Dinosaur

On New Year's Day we saw the movie The Good Dinosaur.  All I knew about this movie before seeing it is that our oldest daughter wanted to see it, it was about dinosaurs, and that it was the newest Disney-Pixar release.  I had no idea that The Good Dinosaur contained adoption-related themes until I noticed that a few scenes and characters stirred up some very intense feelings of "longing" and loss inside of me.  I'll go into a little more detail later, but suffice it to say, the longing and yearning I was feeling were definitely emotions related to grief.

Incidentally, the animated scenery in The Good Dinosaur also made me want to take a vacation in the mountainous Teton Valley of Idaho and Wyoming. 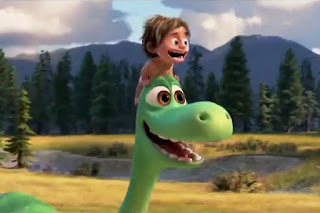 I also recently attended a training where I was reminded that grief is not always just "sadness".  Grief can also be anger, denial, bargaining, and to use a few other terms not used by Elisabeth Kubler Ross which probably fit under the "anger" category- feeling resentful or bitter.  I mention this because along with my feelings of longing and sadness while watching the movie I found myself feeling a bit bitter and angry.  These are also feelings of grief, just a slightly different stage.  Here's what stirred these feelings up within me and please be advised for SPOILER ALERTS.

The main character in The Good Dinosaur (hence the name of the movie) is Arlo.  Arlo is a somewhat timid but down-to-earth dinosaur who eventually befriends a little orphaned cave boy despite an initially adversarial relationship.  The little cave boy is more dog-like than human and thus has the fitting name of "Spot".

Arlo and Spot are both orphaned or separated from their families (at least temporarily in Arlo's case). I can definitely see how an adopted child- whether still a child or an adult- could relate to Spot's character and how this movie could trigger feelings of grief, separation, and loss- especially if someone were adopted at an older age after knowing their first family (whether that first family be actual biological family, a foster family, or workers and other children from an orphanage or institution).

One of the most poignant scenes is when Spot and Arlo grieve together about the loss of their families:


The character I personally related to the most in The Good Dinosaur was Arlo because of the fact that he took Spot under his proverbial wing and eventually had to "let him go".  Sound familiar to foster parents or birth parents?

I have to admit, it was really hard for me to watch Arlo let Spot go live with another cave family rather than stay with Arlo and his family- primarily because they were Spot's "people" and Arlo's family was not.  After all, dinosaurs and humans are different species.  But it could still work, right?! This could certainly bring up some interesting points for discussion about what makes a family- does a family who share the same genes or race (or in this case, the same species) trump a family who doesn't share the same biology or race of a child?

At one point in the movie as Arlo and Spot are traveling to Arlo's home together after a very long journey there is a howling sound in the distance.  Spot's ears perk up since it sounds familiar to his own howling.  Arlo spots the source of the howling- a cave man in the distance- but doesn't let Spot know what he sees and he just continues on.  [Enter DENIAL].  In fact, Arlo gets a really annoyed look on his face before continuing on his journey.  That's the scene which brought up the most resentment and bitterness inside of me.

I can't say for sure what was going through Arlo's mind at that moment, but if I could accurately read his mind (and I'm totally projecting my own feelings as a foster parent and recalling when I had to say goodbye to one of our former foster children who was transferred to the care of relatives after she had been in our home for nearly a year and it was no longer an option for her to return to the care of her bioparents) I think he would be thinking something like this:

"Oh- so you're ready to take him NOW?  What makes you think he's better off with you?  Where were you when he first needed someone to take care of him?  He's just fine where he's at.  I'm the one who's been taking care of him all this time- look at all that we've been through together- and you expect me to casually hand him over to you like it's no big deal?"

Yep- very familiar feelings.  But then I have to remind myself, yet again- that foster care isn't for ME- it's for the children.  It's about giving a family another chance to stay together even when you watch their child thrive in your own home and in your own family and even when (this is the most frustrating part) reunification may not actually be in the child's best interest.

Sometimes reunifications or placements with kin do work out- don't get me wrong.  Such was the case with the foster child I referred to who was adopted by a relative into a safe and loving home.  In those cases you don't have to constantly worry about the child's welfare, but you can rejoice with the reunion or new union (if the child isn't familiar with their relatives) while simultaneously grieving for the loss of that child as part of your family.

When you look at things from a child-centered perspective rather than your own biases and judgments, everyone in the child's life plays a supporting role rather than a competing role because love doesn't have to be divided up but can be shared and expanded.

As painful as it was, Arlo eventually let Spot go to his new family and they welcomed him with love.
It was a beautiful scene and for a moment I let my anger subside and rather than relating to Arlo's character I found myself relating to Spot's new family welcoming a new child into their family with wonder and a bit of curiosity and speculation, but most of all with LOVE.

On another related note, I'm looking forward to seeing Kung-Fu Panda 3! I laughed after seeing a preview which shows Po looking for his birth father and an older-looking panda with an uncanny resemblance to Po announcing that he's looking for his birth son.  Both Pandas seem initially intrigued with each other and pause for a moment before dismissing any possibilities.  Meanwhile, everyone around them witnessing the scene is face-palming or sighing at the obvious before Po and his birth father make the connection and reunite.

As much as I'm looking forward to seeing Kung Fu Panda 3, I'm also slightly worried that our oldest daughter will ask more questions about her birth father when she sees KFP3 as she did a year or so ago after watching an episode of Disney's Jessie, in which the character Luke, wants to know more about his early life since he was adopted as a young child.  Don't get me wrong- the problem is not that my daughter will ask questions about her birth father, that's to be expected- the problem is that we honestly don't have a lot of info about him (by his choice).  At least our other two children have pictures of themselves with their birth father, and we can tell them what we know and remember about him when they ask, but how can you answer someone's questions when you don't have the answers?

Adoption can be wonderful but there is also so much grief and loss that needs to be acknowledged by all members of the adoption triad.
Posted by Mary at 12:02 PM

We went and saw Kung Fu Panda 3 the other day, it was great; however, it did stir a lot of feelings for me when I think about my daughters questions/feelings as she gets older about her adoption. Once you enter the world of foster care/adoption your view on everything certainly changes doesn't it?