Grieving My Losses Regarding My Children's Histories

Adoption is a cure for childlessness but it is not a cure for infertility.  I’ve heard this plenty of times but I’ve had some recent experiences where I think- “Okay- I think I understand what that means now.”

I admit, sometimes I feel guilty for having any “issues” surrounding my own infertility now that I have three beautiful children thanks to adoption, but the fact is, there is grief and loss for everyone involved in adoption including adoptive parents- and those issues come and go.  While I generally put any losses or issues of my children above my own I also know that it is needful for me to address any losses I feel on my part, so allow me to share some of my thoughts:

Perhaps the biggest “loss” that I have felt regarding my children is not necessarily that they didn’t come from my womb but in a few cases, that I couldn’t protect them from harmful substances while they were in the womb of their birth mother.  It doesn’t take a rocket scientist to figure why a baby would be removed from his or her mother at birth and placed in a foster home so I’ll just leave it at that without going into details.

Another huge loss I’ve felt:  It makes me sad that I missed out on the first year of my son’s life.  I never got to see him or hold him as a newborn.  Think of all the bonding we could have had!  It makes me upset and out of control that I have no idea how much he had to suffer the first eleven months of his life before he was placed with our family.  I know that his birth parents loved him but his environment was such that he was court-ordered into state custody for his own safety.  Obviously, things weren’t ideal for him but I don’t know the extent of what he had to go through.

The part that makes me “angry” about the in-utero or early environment of my children is how it will affect their cognitive, emotional, motor- basically any neurological development which, as research has shown, is profoundly affected not only prenatally but during the first three years of life as well.  Does that mean if I had given birth to a child who was, for example, physically deformed or had a disability that I wouldn’t love them?  Of course not!  It’s not that I would ever stop loving any of my children because they are less than perfect but the fact that some of my children’s development may have deficits which could have been totally preventable is the part that makes me angry.

I’ve noticed some other infertility issues creep up lately as two of my nieces have welcomed baby boys into their families- by birth.  Each of these babies was longed for and celebrated by so many when they finally arrived- and I use the term “finally” because in both cases, they didn’t come easily.  I have been happy to welcome these babies into my extended family, but I’ve got to admit that I forgot just how much celebrating involves not only welcoming another member into a family but celebrating the passing on of genes!  There have been so many comments as my nieces share pictures of their sweet babies about how much their children resemble this family member or that family member.  I’m just as guilty as everyone else in my comments because it’s impossible not to notice “Wow- he’s got so and so’s eyes!” or “He looks like this (or that) side of the family.”

Does a child have to look like you or even share your DNA to be loved or any more or less of your child?  Of course not- has Tarzan taught us nothing?! 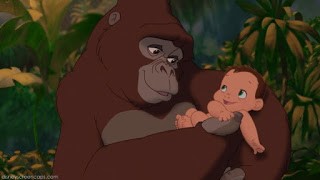 But I’ve gotta admit- it’s pretty amazing when someone can notice their own physical traits literally passed on and expressed in another human being.  I guess in a nutshell, I am jealous of my niece’s experiences of being able to pass on their genes to their children.  Please don’t take that for granted if you have biological children!

So since I’m on a roll here . . .  As hard as it is to admit as well, I am somewhat jealous of the accolades each of my nieces received from others about enduring such hard pregnancies and/or deliveries for the sake of their children.  I’m willing to admit this and sound insecure at the risk that it might help another infertile or adoptive mom out there to know “I’m not the only one!” I’ve never been able to make that kind of a physical sacrifice for any of my children.  And I’ve never had the opportunity to bond with my children before they were born, as that is a privilege shared between them and their birth mothers.

NOTE:  I’m fully aware that there may be a birth mother/first mother reading about my thoughts who shares the total opposite perspective: “My son (or daughter’s) adoptive parents are so lucky!  I’m the one who had to suffer through pregnancy and delivery and didn’t have enough time with him and now they’re the ones who get to raise him!”  Which perspective is valid?  Both.  Everybody’s adoption story is a personal one which will vary.
Posted by Mary at 1:32 PM