I would HIGHLY RECOMMEND that anyone who has:

BECOME FAMILIAR WITH THESE CHARTS!
[Maybe not so familiar that you have to study them and pass a quiz type familiar- but familiar enough with the concept that adoption is a complex issue and as wonderful as it CAN be, there is loss felt by all involved in adoption which needs to be recognized.] 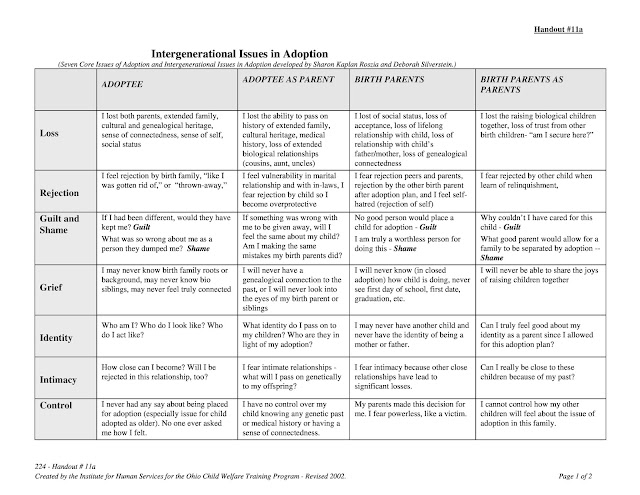 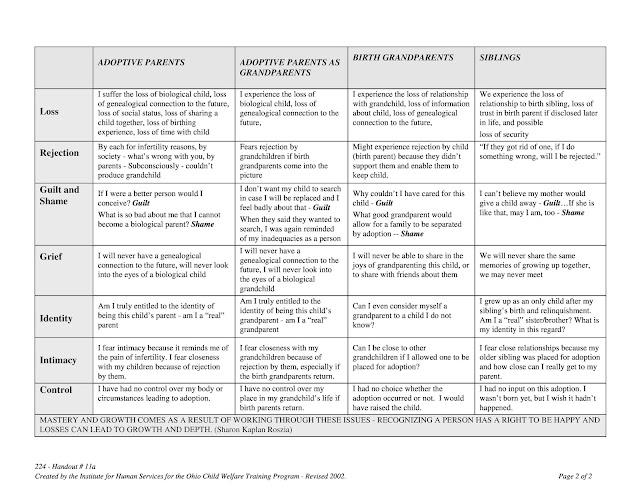 This research was compiled in by two women, Deborah N. Silverstein and Sharon Kaplan Roszia, in the 1980s.
To learn more about their findings click
here: http://www.fairfamilies.org/2012/1999/99LifelongIssues.htm

What struck me most about the research presented in these charts is that:

*  Grief and Loss seem to be the main issues of adoption trauma but I appreciated learning more about other areas that affect ALL members of the adoption triad, including rejection, guilt and shame, identity, intimacy, and mastery/control.

*Each of these core issues appear and reappear at different stages of development and in much more than just one arena of a person’s life.

*I found it particularly interesting that birthparent grief can be “postponed” for up to 15 years.  Thank goodness for awareness and support groups.
Posted by Mary at 1:02 PM