Reflections on the Movie "Lion"

I finally saw the movie "Lion" over the weekend (it's on Redbox) and I highly recommend it.

Here are some of my impressions of the movie:

-There are far too many children all over the world without families.  Poverty plays a huge role in why children become orphaned, as does education.  In the true story behind Lion, Saroo is a young Indian boy who tragically becomes lost and permanently separated from his mother.  Saroo has no choice but to live on the streets.  Saroo's mother cannot read or write and makes a living carrying rocks.  I mention this fact not because it has to do with the cause or reason that they were separated but to illustrate how education and poverty are intertwined and also to give an idea of Saroo's early environment.


- Homeless children- whether from a characteristically impoverished nation or those who age out of foster care in the United States- are at alarmingly high risks for human trafficking.  This is extremely upsetting.

-At the close of the movie Lion, there was a website referenced- http://lionmovie.com/#charity- which  addresses organizations in India working to help missing children.  There was also a staggering statistic cited that over 80,000 children in India go missing each year.  Mind blowing!


-Another organization I have been following over the past couple of years which seeks to combat and rescue child trafficking victims around the world is Operation Underground Railroad.

-One of the most moving lines in the movie is when Saroo tells his mother something to the effect of
"You didn't just adopt us, but our past as well."  Saroo's parents adopt him and later another little boy from India.  I can imagine that adopting an older child would present challenges for any family, but adopting an older child who is coming from a completely different culture and speaks a different language would present some additional challenges for everyone.

SPOILER ALERT (for anyone who has not yet seen the movie): Saroo grew up in India, but was adopted by an Australian couple and grew up in Tasmania.  As a young adult, Saroo struggles with his identity and history and with the aid of modern technology and his own detective work, he eventually makes a remarkable journey to find his birth mother. 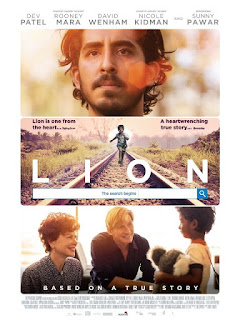 -I was relieved and touched by the way Saroo's mother and his first mother respected each other's roles in Saroo's life.

-One of the things that keeps Saroo from telling his adoptive mother about his quest to find his birth family is that he is afraid she will feel hurt or betrayed by his decision.  In short, he has what some might call "divided loyalties" between respecting the family who raised him and a yearning to understand where he came from.  [Refer to Adoptee Grief, Loss, and Identity under Seven Core Issues in Adoption charts.]

-When Saroo's mother hears of his intents to find his first mother her mature reply is (something to the effect of) "I hope you find her and she sees how beautiful you have become."

-I was so touched by the actual footage at the end of the movie of Saroo going back to India, this time accompanied by his mom, and she is able to meet her son's first mother for the first time.  "Sacred" is the most adequate word I can use of to describe such an encounter.

On another note, Nicole Kidman is the actress who plays Saroo's adoptive mom.  This is an interview with her about how the role as an adoptive mom to trans racial children mirrors her own life: https://www.theguardian.com/film/2017/jan/12/nicole-kidman-lion-adoption-love

And here's the official trailer for the movie: