This post was originally published on MEM's MEMOS on August 12, 2008 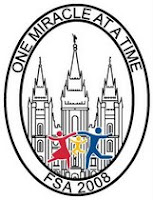 Over the weekend I attended the 2008 FSA (Families Supporting Adoption) National Conference and it was WONDERFUL!

The theme for the Conference was “One Miracle at a Time” and I don’t think a more appropriate theme could have been chosen. I heard dozens of adoption stories at the conference and each circumstance was unique: some people adopted domestically, while others adopted internationally, some people had an open relationship with their child’s birthmother while others never met the birthmother, a few couples had waited nearly a decade to adopt while some couples were picked by a birthmother almost immediately after they had finished their paperwork and homestudy, some families adopted children who “just so happened” to bear a strong resemblance to them, while others adopted children who don’t look anything like their family as they are a different race or nationality. But the common thread through all of these stories, as varying as each circumstance was, was that every family who had adopted a child was firmly convinced that that particular child was MEANT TO BE in their family and was MEANT TO COME AT THE TIME THEY CAME. I have a very strong testimony of this and I almost get chills thinking about it. I know that M. was meant to be our child.

Many times at the conference when I would hear others recount their adoption stories there were “miracles” involved. I use the term “miracle” because sometimes there are events which take place which just can’t be dismissed as mere “coincidence“. Those events often make people recognize that God understands our wants and needs on such an individualized level, and He has a personal hand in our life- if we let him. That seemed to be another recurring theme in the stories: before these miracles could take place there was often a considerable amount of heartache involved and the individuals touched by these miracles had to humble themselves to the Lord’s will and let go of their own expectations of how their lives would turn out and/or let go of any sort of preconceived notions of what kind of family and children they would end up with.

I’ve convinced my husband to come to the Conference with me next year and I wish I would have attended before- especially during the time we were just “waiting” for M. to join our family. It’s very frustrating to be expecting a baby and not know the due date. I HIGHLY recommend that any couple who is waiting to adopt-especially if they are losing hope that they will ever get their child- attend the National FSA Conference.

One more plug: I heard Krista Ralston Oakes speak at the Conference. She is the author of this book and the founder of this website. Both are great resources for anybody dealing with infertility and/or miscarriage, or anyone considering adoption.
Posted by Mary at 5:35 PM