Not only is today National Adoption Day, but it was also a year ago this week that my husband and I took our first foster placement, a cute and charming 3 year old boy who I will refer to as Justin.

Justin was with us for less than three months. He originally spent some time at The Christmas Box House when he was first taken into state custody and then he spent about six months in a different foster home before being placed with us.

Justin was reunited with his parents at the beginning of last year and they seem to be doing all right. Fortunately, Justin's parents were very easy birthparents to work with- wouldn't it be nice if that were always the case! They have even allowed us to keep in contact with Justin which has eased the pain of not having him in our home anymore.

This is a picture of Justin when he was in our care. I wish I didn't have to black out his eyes, but I will respect confidentiality issues. Like most three-year-old boys, Justin was obsessed with superheroes- especially Superman. We couldn't resist buying him these Superman Pajamas. Then, when my husband and I took him to Build-A-Bear Workshop to design his own stuffed animal all three of us broke out in grins when we saw there was a Superman outfit & cape as one of the options. So, this is Justin with Superbear. 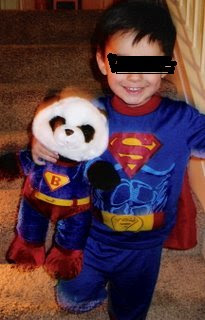